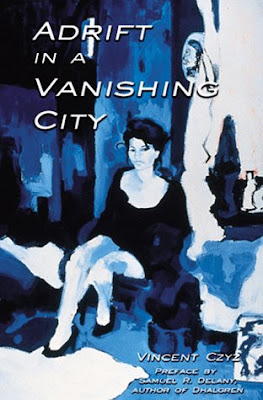 
"Neither a collection of short stories in the traditional sense, nor a novel, these tales overlap at times, in places intersect, often diverge, but are all held together by the thread of memory. An odyssey of hypnotic beauty originating in a small-time city in Kansas, Adrift in a Vanishing City takes the reader through a tortured landscape of obsessive love, to real-time cities such as Budapest, Berlin and Mexico City, down dead-end streets marked by the invisible graffiti of the lives lost in them. Told in hauntingly lyrical prose, Adrift is a passage within the continuum of memory--from which a hidden aspect of human experience arises, and back to which it will return. In this book, space and time become so malleable, the disturbing echoes of the destruction of Sodom and Gomorrah whisper softly beneath the summer moon as it arcs over the fields in Kansas, bringing the reader to the understanding that everything underlies the moment on which we stand overlooking existence - the moment we call now."

"Deeply romantic (in the best sense) and darkly evocative, Czyz's lush style explores regions well beyond simple narrative, probing the constantly shifting, oblique connections between failure, memory and the forever-incomplete nature of human desire. A moody, gorgeous and formally innovative collection, "Adrift in a Vanishing City" deserves a wide audience among readers who understand that fiction is about more than getting a character from one room to the next." - Greg Burkman

"Adrift in a Vanishing City ought to come with a warning label: Herein lie levels of meaning beyond the grasp of the blissful best-seller reader. In poetic prose that flouts conventional fictive forms, Czyz draws on classical myth, fable, folklore, Shakespearean tragedy and other genres to create a metaphor of modern alienation. The nine stories are set in a small, southeastern city in the coal-mining region of Kansas." - Joe Castronovo

Adrift in a Vanishing City by Vincent Czyz (pronounced “Chez”) is a collection of nine interconnected fictions constellated around the love story between Zirque “Zee Gee” Granges and Rae Anne “Blue Jean Baby Queen” Kelly. Zirque—a world-hungry cavalier raging against Thanatos—is “trapped being who he is for eternity, tired of being Zirque, distracting himself from himself with a change of scenery.” Zirque’s restless nature impels him to continent- and bed-hop, while the love-locked Rae Anne recedes into the depths and learns to “live through the never-knowing of her man.” Within this basic yet inexhaustible framework, Czyz composes an Orphean song of desire and longing that explores the tenuous nature of human intersection and memory with a tenderness rare in experimental fiction.
Enhancing the pleasures produced by Adrift’s multiple narratives, Czyz’s primary accomplishment stems from the quality of his language. Indeed, Adrift is a book that rewards multiple readings and demands to be quoted, as the multilayered construction of Czyz’s prose enables Adrift to speak toward those depths of mind and memory that tend to elude language. In this sense, Adrift is ostensibly a work of prose poetry. As Czyz says, “This is the land of the guttural tongue, the great dead stone cities, the legend that has begun to lift itself out of the ruins, like those surreal paintings in which the images are raising themselves off the canvas, emerging from flat two-dimensional art into the four- or five- or 22-dimensional actuality we cannot keep track of anymore.”
Throughout Adrift in a Vanishing City, the city is a metaphor for memory—human and mythic—and its unspeakable reaches. Readers should rejoice that Czyz has explored this city and has returned from the underworld with a song to recover the vanishing dimensions of ourselves. - Matt Badura

"I'd never heard of this book or the author until I got a tip by e-mail. Once you read the preface it's not hard to figure out why. The major houses turned it down although one editor called it "hot-house writing-lyrical, Joycean, experimental." This book was a little too much for their conventional, market-minded tastes. As a Kerouac connisseur whose read just about all of Jack's books, I couldn't resist checking out a contemporary writer cast out by the mainstream. The first time I read "Adrift in a Vanishing City" I was stunned. Almost as soon as I turned the last page I went back to the first and the second time through I stood back with the same amazement but a lot more understanding.
While most of the reviews dwell on the ethereal beauty of Czyz's writing, it's dream-like qualities, it's mythical feel and the collage of imagery that layer the narrative as if he were trying to use words to recreate the memory of a `small-time city' in Kansas, they seem to miss the gritty side. The characters include the town drunk, the town idiot, an ex-convict whose lines are as funny as they are obscene, a half-hearted Country Western singer who spends all of the money he hustles or earns on travel fare, a heroine addict in Paris, an Oxford-educated old man living in a squalid hotel in Mexico City and the town insomniac whose main occupation seems to be walking the streets in the early morning hours.
The writing itself, when it's not burrowing worm holes in our complacent points of view, is often concrete enough you could pave a street with it as when Czyz writes, "A light turns red in quiet enough to hear the metallic click." Or, "...the still-life of beer bottles (glossed with yellow light) and ashtray with crushed white butts (like tiny untended bones) on the table in Farley's Tavern ..." or "...I am no better off than a dead leaf, a discarded snapshot curling at the corners, swept end over end down deserted streets, the edges of cities even continents apart always the same near dawn-scattered bird twitters, shadows turning their slow pirouette into brick and stone, the same cold blue-of-drowned lips appearing in the sky ..."
When you get to the last story, a just about perfect recreation of Old Testament jargon, you'll at first be confused, wondering what this story, which apparently occurred thousands of years ago in ancient Palestine has to do with a prairie crooner and his drinking buddies. But by the time you figure it out, you also realize that the drift in these stories isn't just continental. It isn't just `galaxies sliding sideways' or drifting from lover to lover or even the drift of centuries, but has to do with another dimension entirely. Czyz is hooked in, just like Ginsberg and Kerouac were back in the fifties. "Adrift in a Vanishing City" is going to be an underground classic and in 10 years critics will be amazed that Czyz, who seems to have produced nothing in the two years since, labored in obscurity. Whatever you do, don't leave this page without buying it. And get your friends to buy it. That's how the underground works. – review @ Amazon.com