Horror Movie On The Radio 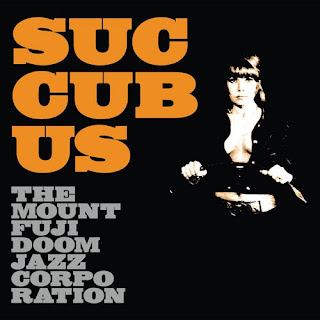 "On the 15th of January 2009, The Kilimanjaro Darkjazz Ensemble gathered at a studio in the Netherlands to shake out the rust before going on tour. One wisely recorded improv session later, these film buffs emerged with a seventy-five minute love-letter to the movie they habitually watched while recording: Jess Franco’s Succubus. Capturing the taboos and temptation of its source-film’s eroticism, The Kilimanjaro Darkjazz Ensemble transformed themselves into The Mount Fuji Doomjazz Corporation, trading their past efforts in metal for a greater emphasis on free-form jazz. A Succubus – meaning, a demon that fornicates with human prey – deserves a soundtrack of such alluring menace.

With the lead-off track’s deep drones and loose cymbal hits, ‘The Sexy Midnight Torture Show’ doesn’t sound like the taping of an S&M performance at all; in fact, it sounds as if whoever was responsible for recording jetted for the venue’s dark back-alley. Into the shadows, after all, is ultimately where Succubus belongs, amid the gothic gloom of urban and social decay. As the echoed drums of ‘Perverted Pleasure Party’ clatter like rain on trashcans, the violin in ‘Fleeing the Scene’ seems to ricochet across the buildings of an abandoned metropolis. Needless to say, Succubus can illustrate morose bleakness to the extreme. Mercifully, the Mount Fuji Doomjazz Corporation avoids completely bumming us out with a scattered handful of tracks that individually combat this near-impenetrable darkness. ‘Erotic Love Queen’ for example, parts the grisly clouds of its preceding segue with warm bass movements and soaring trombone while album highlight ‘The Admiral’s Game’ incorporates such elements into a visceral build worthy of post-rock’s pioneers. It’s a strategic success; after a few tracks of androgynous drones weigh us down, the collective eases you back with the tender sighs of trombone and muted vocals. Such instruments are as fundamental to the soul of Succubus as they are payoff for us listeners.

Although Mount Fuji Doomjazz Corporation don’t intend for this release to stand as soundtrack to Jess Franco’s 1969 cult favourite, it certainly ebbs and flows with the sympathy necessary to compliment moody cinema. In the case of ‘A Bad Trip’, the soundtrack is purely subconscious, operating on the minimal scale of tense bass and distant brass before ‘A Place for Fantasies’ subtly rises into trombone-squiggles and foggy ambiance. By the record’s last third, there’s little point trying to distinguish this track-by-track; as surely as Succubus was recorded live in one take, it deserves to be heard as such. Pertinent to its muse, this follow-up to the Mutations EP is a tad frightful but wholly encompassing, and while it’s best heard at night, don’t dare play Succubus in the dark." (theskeletoncrewquarterly)
Labels: Mount Fuji Doomjazz Corporation