Adam Levin reminds us that discovering you might be the messiah would be both a holy and hilarious thing: 'War and Peace' in middle school 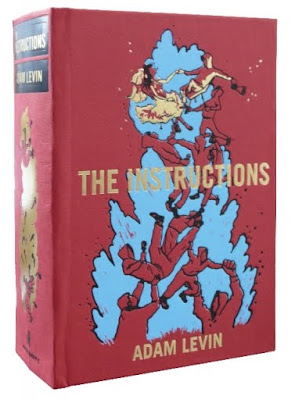 "Beginning with a chance encounter with the beautiful Eliza June Watermark and ending four days later with the Events of November 17, this is the story of Gurion Maccabee, age ten: a lover, a fighter, a scholar, and a truly spectacular talker. Ejected from three Jewish day schools for acts of violence and messianic tendencies, Gurion ends up in the Cage, a special lockdown program for the most hopeless cases of Aptakisic Junior High. Separated from his scholarly followers, Gurion becomes a leader of a very different sort, with righteous aims building to a revolution of troubling intensity. The Instructions is an absolutely singular work of fiction by an important new talent. Combining the crackling voice of Philip Roth with the encyclopedic mind of David Foster Wallace, Adam Levin has shaped a world driven equally by moral fervor and slapstick comedy—a novel that is muscular and rollicking, troubling and empathetic, monumental, breakneck, romantic, and unforgettable."


"This novel is beautiful and warm-hearted, yet at the same time terrifying and may betray you as you turn any page. Here is a book that will haunt your thoughts long after you've closed its covers and will have you longing to discuss just exactly what happened. Adam Levin will be compared to literary wunderkinds of days gone by, but do not be fooled: he is a standalone original, and the bona fide next big thing." — Jamil Zaidi

"The Instructions is brilliant. A virtuoso literary performance that is wildly entertaining from beginning to end (page 1 to page 1024). It is ambitious, provocative, touching, hilarious and sad. The experience of reading this novel is exhilarating and extremely powerful." —Ed Conklin

"The Instructions inverts the world; the deeply human concerns—love, war, religion, power, morality—are recast in a junior high setting. But these issues are by no means lessened in Levin's novel—on the contrary, the reader becomes more acutely aware, perhaps even less jaded, by the weird juxtaposition. Gurion ben-Judah Maccabee (budding Hebrew messiah and revolutionary) is devastatingly romantic, wise, innocent, conniving, pugilistic, and intensely funny. His family, friends and enemies, and teachers (who are sometimes a bit of both) are all fully realized. Stories run like filigree through The Instructions, adding to the Epicness, but Levin always brings us back to Gurion and his conflicts and machinations... Yes, The Instructions is a Big Fat Book, the kind you kill vicious marsupials with, prop a door, or block a bullet; it can intimidate, and perhaps cause a wrist injury, but as may not be the case with other BFBs, this sprawling novel is a delightful reward; diving into it feels like an indulgence, and the inappropriate-laughter-on-public-transit moments feel like revenge upon a bland, workaday world. I love books like this: just the right amount of clever & inventiveness; compelling narratives; a questing and questioning nature; how it expands the emotional range with which one interacts with literature. There's so much to say about The Instructions, and it's hard to know where to stop. I could be succinct and say, 'This is War and Peace in middle school, filtered through Roth, Bellow, and Scheherazade', but I think I just threw up in my mouth a little." — Vlad Verano

"The Instructions is brilliant: genuinely funny, genuinely compelling. It's unique and intriguing. I find myself wanting to tell people about it every day. I haven't loved a book this much since I discovered Gary Shteyngart, lo those many years ago." — Catherine Weller

"I know what it’s like to believe a thing that lots of people think is crazy to believe. In my case, it is that there is a God, that that God has a Son, and that that Son died and then, three days later, wasn’t dead anymore. It is the craziest thing that I believe wholeheartedly.
I mention this, because it shapes how I come at a book like Adam Levin’s The Instructions. That isn’t to say that you have to be religious or even to believe in God to enjoy it. You don’t. But it made me empathize with Gurion Macabee (a boy who may or may not be the messiah) all the more. This is the story of a boy who struggles to know what it is he’s meant to do and who it is he’s meant to be. A boy who feels a high degree of confidence that he is the messiah, but a willingness to admit that he can’t really know until he knows. You know?
It’s that kind of struggle, a knowing unknowing, that make faith the exciting adventure that it is. I’m pretty sure I’m right… but what if I’m wrong? I have to live into the truth of what I believe in order to discover whether it is true, but what if I give my whole life to that truth only to discover it’s a lie? This is the risk of faith. To watch that risk play out in the life and mind of a twelve-year-old boy is a marvelous and sometimes frightening thing.
And kudos go to Adam Levin for delving so deftly into the heart and mind of a twelve-year-old boy. Levin captures the thoughts patterns, the voice patterns, the confidences and lack of confidence. Twelve is an age that is wrought with insecurities and yet an age when our sense of what is right and true can be unshakable. An age when we’re never more sure of our own righteousness, even if we aren’t always sure that we’re right. This is what Gurion wrestles with and we wrestle along with him.
The Instructions is brilliant for a lot of reasons; the main one being that Levin leaves room for us to draw our own conclusions. No two readers will feel exactly the same way about this story and its protagonist. Some won’t agree at all. Some will dismiss Macabee as misguided, others will find that more difficult to do. Some will simply call him “crazy.” others will be reminded of the “crazy” things they themselves believe. Hopefully, all will be challenged to think and to feel and to wonder.
And, if this sounds like a story so epic as to be daunting (the 1000+ pages may feel daunting as well), it is also worth mentioning that The Instructions is funny. Sometimes it’s wry and sometimes ridiculous. Sometimes the chuckle comes with an ache and sometimes a guffaw bursts through.
This, again, is why The Instructions is brilliant. Levin reminds us that discovering you might be the messiah would be both a holy and hilarious thing. By doing so, even his moments of irreverence are imbued with a kind of reverence. It makes for a powerful story, one I am confident that you will enjoy." - Kester Smith

"If The Anarchist's Cookbook provided recipes for potent literature, Adam Levin's The Instructions would be in there, a feast for the Che Guevara shirt–wearing, pissy, lovestruck kid in all of us. Yet Levin's massive novel—his first, on which he spent around a decade working—is assembled with stock-shelf ingredients.
Among them: the rebellion parable of Animal Farm, with after-school detention monitors replacing Orwell's dictatorial barnyard traif. Fistfuls of Robert Cormier's bittersweet Chocolate War dystopia and the poetic pidgin of S.E. Hinton's The Outsiders. Dashes of Philip Roth and pinches of Vonnegut, both of whose works are directly referenced. The entire thing is finished with a glaze of Joseph Campbell and served by Dave Eggers (published by McSweeney's, it basically is). Essential to The Instructions' success is the careful moderation Levin took with his influences. They're not distracting.
The novel is a "scripture" written by the Judaism-obsessed, prodigal, possibly messianic 10-year-old Gurion Maccabee, who has skipped almost as many grades as the schools he's been kicked out of for fighting. Gurion, waiting to see his principal after yet another fight, meets and falls in love with a pretty classmate. It's the first step of a hysterical, heartfelt journey of self-discovery, perpetually foreshadowed by an inevitable climax: the adolescent-lead revolution against the Powers That Be (mainly, the public school system). Each half of The Instructions is devoted to two different days, with the occasional flashback or historical aside, the writing catching the way kids slowly watch the world tick forward. Yet the thousand-page youth-in-revolt epic flies by.
The result? A book that moves beyond completely transparent influences to reach its own distinct, new, great height. Finding out whether or not Gurion is the messiah pales to watching Levin earn him his rightful place alongside Holden Caulfield, Harry Potter, Pony Boy, and every other classically young, angry character who's fought to change his or her world, whether or not they succeeded." - Kamer Foster
Labels: Adam Levin Kamer Foster Kester Smith