Jeremy Leven - A hilarious, tragic, insightful and very strange story about Satan, his therapy and the unfortunate man he chooses to be his shrink 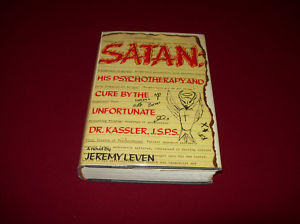 „Alas, poor Satan. He's not happy. No one seems to like or understand him; people have got him all wrong. And his relationship with God is a hostile one. Unloved and misunderstood, he's come back to Earth in search of a psychotherapist; he's prepared—if cured—to deliver the all-important Great Answer.
In Jeremy Leven's wildly original comic novel, we follow the Prince of Darkness through his seven amazing therapy sessions. And we watch him grow increasingly well adjusted while his therapist, the unfortunate Dr. Kassler, descends deeper and deeper into hell.“

„Actually one of my favorite books. Full of sex, depravity and computers.“

„It is a Joseph Heller-esqe black comedy, and a lampoon of psychotherapy, at least as it is popularly imagined to be. The story is engaging, and some of the humor is clever... really the whole Satan angle is well done, but Satan isn't central to the story. The centerpiece of the story is the trial and tribulations of Dr.Kassler, J.S.P.S., who is a basically likable guy. The book only gets three stars because the trials he suffers cross from comic to meanspirited a bit too much, too often.“

„One of my all time favorites! As good the 2nd time around as the first, and I'm ready to read it again. A sly indictment of those who seem to believe all human emotions can be dealt with in logical terms (oh, if all facets of the human psyche were only that easy to pin down!) and those who spend their lives trying to please others.
I highly recommend this one, absolutely.“

„No one has ever done a subtler or a more devastating send up of the psychiatric/psychology industry, nor have many been able to insinuate sly philosophical digressions into a frothing satiric text with such grace and pacing. This satan, faceless, locking himself inside a computer in a public gallery, has the charm to coax a snake out of new skin. The complications are wonderfully wild and orchestrated, and Kassler's travails as a single dad trying to rekindle a relationship with his children are heart breaking as they are potently hilarious.
I am in the league that lent his copy out, and I've been trying to replace it for years. This book needs to come back into print. Author Leven has given us one of the best structured, best written American comic novels, and its a disservice to the reading public to keep it out of print.“

„Don't know where to begin with this one. It was brilliant on every level. I've always been a sucker for the "create a lovable character and then make them suffer untold amounts of shit" scenario - and this has that is spades I tell you. It is a devilish satire, biting social commentary, rich with allegory and very very imaginative. It's a hard sell - but I think you'll be rewarded in the end. I know I was.“

„The initial premise--that Satan has come seeking therapy--is interesting and leads to some funny situations. But it changed tone as it went along, and became much more fatalistic at the end. Some funny commentary about religion, psychotherapy, and human nature; however, the ending seemed forced.“

„Don't be fooled by the title, just be careful where you read it. Though a flawed novel, it's one of my personal favorites. Witty and thought-provoking, Leven's book is a great ride, not to mention a nice little primer on the history of psychotherapy and the various misdeeds of Popes throughout the last two millennium.“ - goodreads

„Can a mere novel completely change your brain chemistry and irreversibly pickle your theology? This one WILL. You'll also laugh,cry and forever rethink what they've always told you about God and Satan. This book's perfectly constructed irony and pit-dark black humor makes it a worthy companion of 'Catch 22', but its characters aren't typical black-comedy pawns. Levin's players are fallible and funny, warm and loving, distinctively-drawn people for whom you'll care deeply. The females are especially strong, sympathetic and distinctive... The book is a hilarious send-up of psychotherapy doublespeak, a surprisingly profound yet entertaining meditation on philosophy and theology (from Satan's side of things), and a tear-provoking tale of Kassler's family, full of love for each other but hopelessly dysfunctional... If Kassler's 1970s-style recap of Job's bad luck streak doesn't plunge him to such wretched depths that he follows through on his planned suicide (and that's a big 'if'), he'll instead plumb the Devil's unhappiness via the strangest psychotherapy ever transcribed. If Kassler makes Satan happy once again, Kassler's reward will be to learn the answer to The Great Question, ''What is life?'' (Yep, the book tells us this cosmic truth, too - worth the price of admission alone, as the carny pitchmen used to say) .... “ – amazon.com review 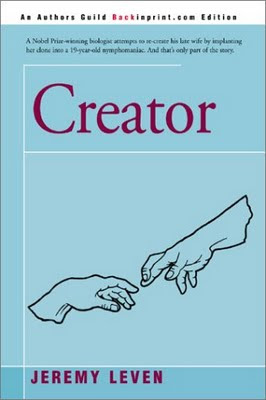 „A Nobel Prize-winning biologist attempts to re-create his late wife by implanting her clone into a 19-year-old nymphomaniac. And that's only part of the story.
Dr. Harry Wolper, an aging Noble Prize-winning biologist, is attempting to create life-specifically, to re-create his adored late wife by implanting her clone in a loving but reluctant 19-year-old nymphomaniac, and do it before his conventional son can have him committed to an asylum.
Creator is a love story, a comedy, a zany account of science running amok, and a moving and tragic account of our biological and imaginative limitations and the struggle we wage against them. Creator was turned into a feature film starring Peter O'Toole and Mariel Hemingway.“