Veronica Gonzalez-Peña - one thought/sentence is able to hold another, right inside itself! A story told by five women from one family, a narrative begins to emerge that is embodied and full of voices, and that presses forward with a beautiful sort of urgency

Told by six women in one family, Veronica Gonzalez Pena’s The Sad Passions captures the alertness, beauty, and terror of childhood lived in proximity to madness. Set against the backdrop of a colonial past, spanning three generations, and shuttling from Mexico City to Oaxaca to the North Fork of Long Island to Veracruz, The Sad Passions is the lyrical story of a middle-class Mexican family torn apart by the undiagnosed mental illness of Claudia, a lost child of the 1960s and the mother of four little girls.
It is 1960, and the wild and impulsive sixteen-year-old Claudia elopes from her comfortable family home in Mexico City with Miguel, a seductive drifter who will remain her wandering husband for the next twenty years. Hitchhiking across the United States with Miguel, sometimes spending the night in jails, Claudia stops sleeping and begins seeing visions. Abandoned at a small clinic in Texas, she receives electroshock treatment while seven months pregnant with her first daughter. Afterward, Miguel leaves her, dumb and drooling, at her mother’s doorstep.
Living more often at her mother’s home than with Miguel, Claudia will give birth to four girls. But when Julia, her second daughter, is inexplicably given away to a distant relation in Los Angeles, Claudia’s fragile, uncertain state comes to affect everyone around her. Julia’s disappearance—which could symbolize the destabilizing effect of manic depression—will become the organizing myth in all of the daughters’ unsettled lives; for if one can disappear, why not all of them?

“For all of the effects of erasure and absence on The Sad Passions, the narration is incredibly present, crawling on the page in spidery, sprawling observations, setting up pools and lairs that lure a reader in.”—Margaret Wappler
“In Veronica Gonzalez-Peña’s The Sad Passions, four sisters, daughters of a mad mother, devoted to her and afraid of her, tell their versions of a tortured family romance. The sisters’ and mother’s raw, impassioned voices are intricately interwoven, and, Rashomon-like, the novel speaks of familial love’s strange demands, harsh effects, and lasting ties. Veronica Gonzalez Peña’s The Sad Passions is honest and riveting.” —Lynne Tillman

“In Veronica Gonzalez’s truthtelling novel of four bright sisters growing up with a mentally ill mother, the lucid, elegant writing defies the very havoc it describes. Built of multiple voices, with curious, haunting photographs, The Sad Passions is immersive, harrowing, and wonderfully intelligent.”—Michelle Huneven
“Five women, including a mother and her now grown daughter, Julia, who was discarded when she was young, narrate this novel of fractured family, selves, and hearts, which gently mesmerizes with its rhythmic prose, and the emotionally rich and complex strategies each woman employs in telling her story. A beautiful and moving choral tale of isolation, love, damage, and intimate struggles. Its many landscapes, especially Mexico City, sing too.”—Francisco Goldman

I’m reading this novel as we speak and falling right into it. There’s something Gonzalez-Peña does with sentences that amazes me: one thought/sentence is able to hold another, right inside itself! A story told by five women from one family, a narrative begins to emerge that is embodied and full of voices, and that presses forward with a beautiful sort of urgency. - Amina Cain

The cover of Veronica Gonzalez Peña’s novel, The Sad Passions keeps changing on me.  It’s a Francesca Woodman photo—a woman or an apparition. She is suspended in air or hanging on for dear life. She is a martyr or a demon. She is in pain or in the realm of the sublime. She is being crucified or being exorcised or being made a martyr. I keep approaching the possibilities of this puzzling image and watch the figure grow porous the longer I look. She is an unstable subject and as I make my way through the novel, it’s the chair that grows more present, more formed than the person. Something in it’s gaping emptiness, the carelessly draped cloth suggesting a body, now gone. I like the way the image moves with this novel, the way the absence becomes the presence. Veronica Gonzalez Peña does not write absence as a form of lack, her absence froths and grows agitated, it fills up the page with pulsing need. 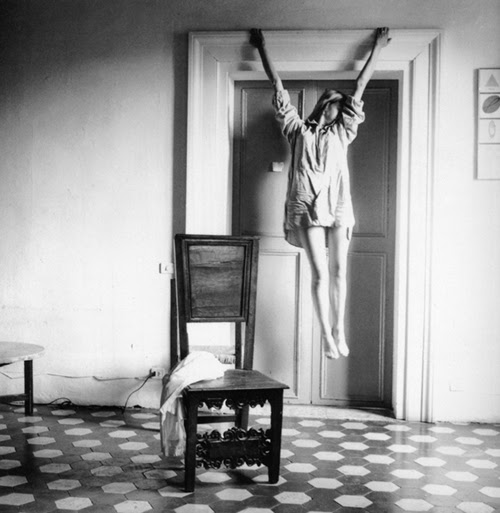 The Sad Passions follows four sisters, their lives punctuated by their mother’s mental illness, by an inheritance of cumulative ancestral pain. The sisters, while distinctly different from one another, all grapple with the fear that their mother’s madness might become their own, that their identities might slip quietly, at any trigger. One gets a sense that at the turning of the page one sister might become the other or that they might all become their mother or they might all melt into a composite figure.
It’s precisely this plurality, this repetition/duplication of identity that is at the center. In a chapter told from the perspective of the 2nd eldest sister Julia, Gonzalez Peña writes,

“The tiny motion, the rubbing in earth, the repetitive mark, a symbolizing of something that otherwise seems impossible to define, impossible to take grasp of, a making of meaning through some small action, an insistence on the voicing of something which can provide at the very least a de-centered understanding…” (Gonazlez Peña, 76)
Each chapter is told from the perspective of a different character, often retelling the same traumatic events but with startling different sentiment. There is something in the retelling process, the approaching of truth by making different angled entries but never quite locating truth, dancing towards it—if only to say that understanding trauma, by nature is a process of de-centering, that understanding must be choral.
The same sense of de-centered truth is mirrored in the trope of twinning. Two sisters, Julia and Sandra are more than sisters, they are reincarnations—Sandra stepping in and out of Julia’s identity in turns. All the sisters are twinned version of their mothers, or at least fear being versions of their mother, ingesting her madness and metabolizing in various way. Fathers look like lovers and lovers look like each other and mothers look like sisters and the only thing that seems clearly distinct is geography-the characters traversing between New York, Mexico City, Spain, Los Angeles, and Long Island.

There’s an anxiety of slippage, a fear of losing singularity and Gonzalez Peña writes fear without panic. She writes fear softly which makes the effect all the more devastating as the sisters navigate, side-step, tumble around their family legacy of sadness, only to come back to the idea that is it this melting of identity that makes them whole in the first place. - Saehee Cho

Veronica Gonzalez Peña, Twin Time, or, how death befell me, Semiotext(e), 2007.
... as I poured my father's ashes into a big Ziploc bag, a little of my blood dripped in. I thought about how each cell has all of you fully inscribed in it, so that if I left those drops in there, it would be as if I were already dead too. I plunged in then, to try and get myself out, but it was all so sticky that I had to give up; when I pulled out my hand, parts of my father were stuck all over it ... — from twin time

Poetic, sensuous and witty, Veronica Gonzalez's debut novel unfolds like a fairy tale spanning the dusty hills of Los Angeles and the glittering nightlife of Mexico City. Raised in northeast LA by her widowed immigrant father, a baker, Mona has grown up believing her mother died minutes after her birth, and her twin brother was simply given away. Stifled by unnamable doubts as a child, when her father dies, Mona sets off on a quest to discover her long-lost twin brother. The journey takes he into the labyrinth of her own fabulations about her parents' lives, and a dreamy Mexico City that exists only as cultural imagination. In the process she encounters a band of Nordic men, her Chinese double, a lascivious giant, and a tribe of feral children. Gonzalez masterfully probes the oddness of Mona's interior world until it becomes a twisted parable for all kinds of displacement.

"Defying easy categorization, Gonzalez's debut novel is an often-mesmerizing account of a young woman's search for the truth about her parents, with absorbing stream-of-consciousness passages that draw the reader into her mind...."—Publisher's Weekly

"I loved the fabric of this book; the rhythm was palpable. The forces swirling in and around the young girl and the estranged and luscious descriptions of nature and mating and storytelling and dreams were told so silently. It was like being in an aquarium looking out somehow." - Eileen Myles

"A lost twin, her mother held in a child-like state, a love-struckbaker, they wander perpetually homesick, through the urban calamitiesof Mexico City, Los Angeles, New York in Veronica Gonzalez's bold,dark, and beautiful first novel. twin time: or, how death befell mereads like a fairy tale that has been torn apart and stitched intosomething utterly contemporary, revealing the nightmares and longingsof the modern world."—Danzy Senna


“In The Dream” by Veronica Gonzalez Peña

Veronica Gonzalez is the coeditor of Juncture: 25 Very Good Stories and 12 Excellent Drawings and the founder of rockypoint Press, a series of artist-writer collaborations produced in association with 1301PE Gallery. twin time, her first novel, won her the 2007 Premio Aztlán Literary Prize.
Labels: Veronica Gonzalez-Peña