Nick Francis Potter - A masculinity cult seeks the advice of their mothers regarding the resurrection of Paul. A headless drifter beset with stray arrows finds a new head and falls into a void 
A young pioneer woman wanders into an oilfield guarded by a temporary Goliath who used to date her mother. An aspiring artist/entrepreneur marries a machine filled with birds to himself and his wife. A masculinity cult seeks the advice of their mothers regarding the resurrection of Paul. A headless drifter beset with stray arrows finds a new head and falls into a void. In his debut collection of comics and prose, Nick Francis Potter delivers an absurd and innovative quiver of stories over-spilling with dark humor and wild imagination.


"When I first read Nick Potter's amazing story 'Oops, Isaac,' a few years back, I was impressed—with the daring, the verve, the substance, the invention of this very serious, very funny story. I am delighted to see NEW ANIMALS, Potter's first collection of stories—and cartoons!—is just as daring, inventive, funny, and serious. Watch out, animal world of indie readers, thinkers, cartoonists, philosophers, and comics, you have an extremely impressive new primate among you."—Rebecca Brown

Nick Francis Potter’s New Animals (Subito Press) is a startling book, an unleashing of all-too-human humans and other monsters within wildly conceived spaces. While echoing Ben Marcus’s absurdist eviscerations of the nuclear family, George Saunders’s satirical takedowns of post-industrial society, and Brian Evenson’s bleak mind- and landscapes, Potter’s prose is its own animal.
These often bizarrely humorous, humorously bizarre short fictions—featuring sundry amputations and beheadings, resurrections, sacrificial killings, climbs into and out of holes, and a host of angels and “more than animals” animals—are suffused with an overwhelming sense of impending doom and certain death, with all the uncertainties coming before and presumably after the worst has happened. The book’s innumerable odd juxtapositions, engagingly clunky phrasings, and obsessive inventorying are all in service of several overarching projects, namely, a peculiar dissolving of genre boundaries, an imploding of narrative conventions, and a singular dismantling of fairy tales and fables, and, especially, of biblical stories.
The book’s art, all adroitly drawn by Potter, takes different forms: as chapter heading illustrations, as embedded pictures within other stories, or as standalone panel sequences. While less lexically dense than the other stories, Potter’s comics are certainly as visceral and darkly comical. Gnarled and barbed, the drawings sometimes bring to mind the Paleolithic cave paintings in Lascaux, Potter’s various beasts conjuring an odd evanescence, a similar air of mystery and menace.
In short, New Animals is where the wild things irreally are. - John Madera


It's been a hot minute since we last chatted with Nick Potter. The former Utah artist and   moved around with his awesome wife Erin and their kids to new places, but his artwork continues to thrive in new areas on the other side of the country. Earlier this month, Potter released his debut novel, New Animals, filled with quirky stories and illustrations that capture a non-conforming way of storytelling and artistic expression. Today, we briefly chat with Potter about what he's been up to, his book and what he's got planned down the line. (All pictures provided courtesy of Potter.) Gavin: Hey Nick, first off, how have things been since we last chatted?
Nick:My goodness, a lot has happened. It’s been what? Five or six years? Since then, we moved to Providence, Rhode Island for a couple of years while I attended Brown for my MFA. We also had our second son while there. Currently, we are living in Columbia, Mo., where I’m working on finishing up my Ph.D. in English and Creative Writing at the University of Missouri. It’s been wild and busy and fun and terrifying few years, to be sure. How have your latest zines and comics been working out lately, and what have you been working on in that area?
Inasmuch as I’ve had time to make them, absolutely. Last year I self-published a few different mini-comics, including the first couple issues of Some Horns, which I’m also serializing online at Hobart. I also put out two self-contained stories, Conrad’s Inevitable Death, and Irregular Limbs. I should mention that none of them would exist without the dedicated help and expertise of my wife, Erin. We ended up taking them to the Toronto Comics Arts Festival and Small Press Expo in Maryland, which was a lot of fun. I’m hoping to make some more soon, but “soon” feels pretty abstract right now.
How did the idea come about for you to write a book?
They idea evolved slowly, I guess. I had been writing for a while before I ever really considered trying to get published. While I have always enjoyed writing, I’ve been pretty self-conscious about the quality, and so it wasn’t until I’d been accepted to Brown’s MFA program that I thought it might be a real possibility. From there, I’ve just been writing compiling a lot of different stories, and after a certain amount of time, I realized I had something resembling a book. 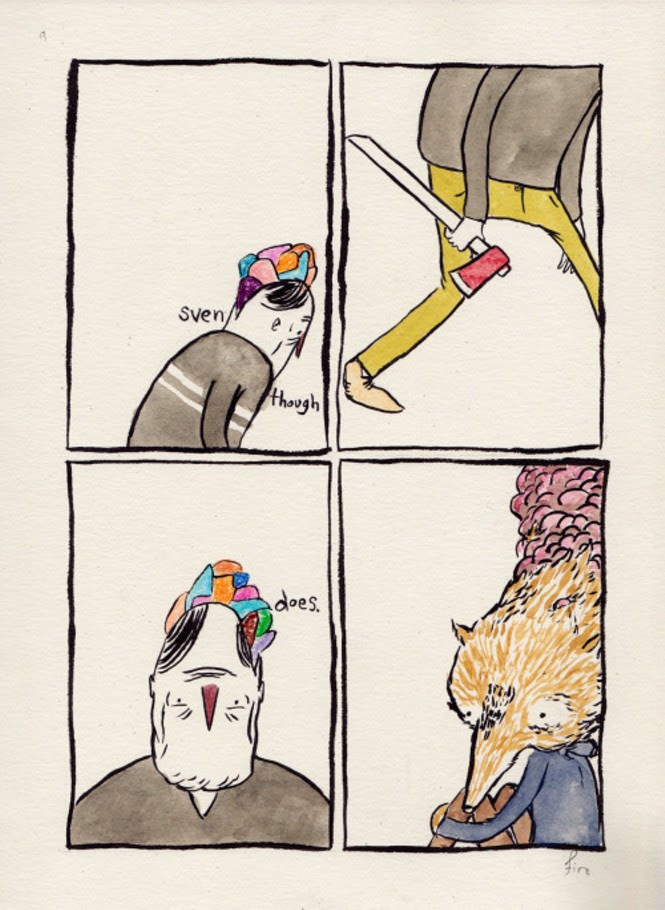 What was the process of creating the stories that are collected in the book?
The process varied widely from story to story. As I think is apparent when you flip through the collection, I ended up experimenting with a lot of different formal techniques while writing, including standard prose, comics, and some stories which contain prose, and stand-alone images. Because of that, some of the stories happened quickly, in a kind of burst of creative energy that I finished within a week or while others came together over a much longer period of time. “Oops, Isaac,” the longest and most formally ambitious story of the bunch, I began as a I wrote in a playwriting class at the University of Utah, and went through an enormous amount of changes over a period of 10 years before it became what it is now.
What were your thoughts behind the designs for the sketches throughout each story?
Regarding the drawings and comics, I really tried to draw each in a style unique to the story in which they appear. So while I think you can definitely see a similarity in terms of style from one story to the next, I definitely made an effort to stylize the illustrations as a means of reflecting tone and authorship. For instance, the illustrations in “Herbert 2b Makes a Mess of the Locals” are a lot more chaotic and representative of the authorial voice than the drawings in “Paul’s Tomb,” which have a more playful, detached absurdity, consistent with the tone of the third person narrator. 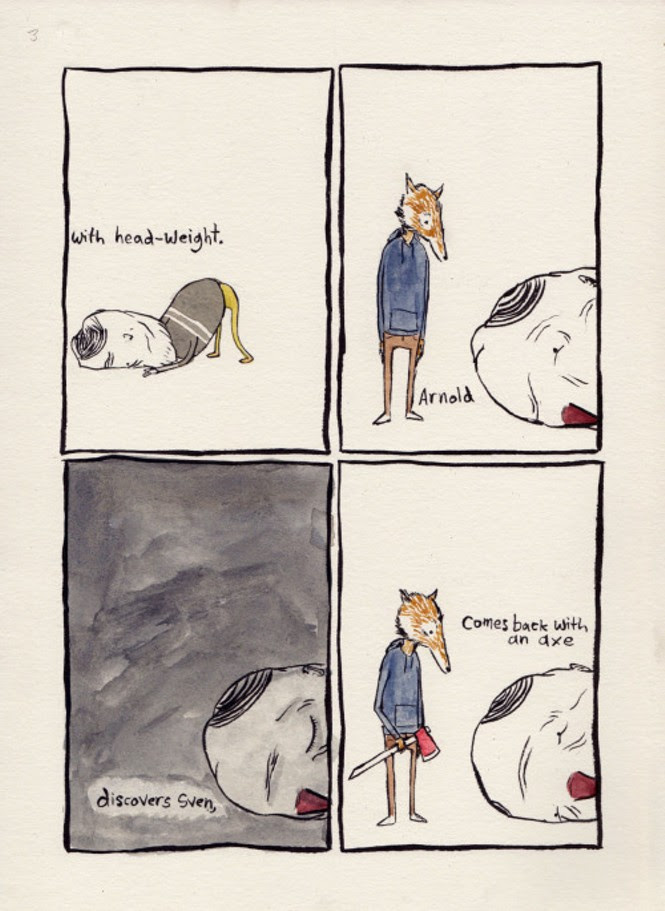 The book has a very clever tone, but also feels steeped in dark humor. Was that pre-planned, or simply how the stories played out?
As a collection, no, that wasn’t pre-planned, though I think it’s one of the things that really unifies the collection. I actually have some anxiety about it, because, for a lot of people who know me, it come as something of a surprise, all these really dark and violent stories. I think it’s my mom in particular. She’s been reading the book and calling to ask me questions about it—which is amazing, she’s been really supportive and I love her so much for putting effort into my book—but she is really not the kind of person who subscribes to the kind of fiction I’m writing, and I think there’s been this kind of humorous, lovely discomfort in talking together about these uniformly dark, often disturbing stories.
Do you have any plans for a follow-up yet, or mainly watching to see how New Animals does?
I’m working on quite a few different projects right now, perhaps too many. And all of which are presently on the back-burner, as I’m right in the thick of the most demanding part of my Ph.D. program. But hopefully, in the next year or two, I’ll be able to finish a couple of them. Until then I’ll be hunkering down writing academic essays. - Gavin Sheehan


Nick Francis Potter is a multimedia artist and writer from Salt Lake City, Utah. His writing and comics have appeared in Ninth Letter, Caketrain, Black Warrior Review, and Sleepingfish, among others. He currently lives in Columbia, MO with his wife and two boys.
Labels: Nick Francis Potter