Jeff Bursey - a fill-in-the-blanks novel mercifully free from characters to warm to and without tiresome plot points to retain, features artistic foibles, domestic strife, questions galore, a catastrophic hurricane, and a narrative voice that veers from mean to genial as it explores whatever topics come to mind 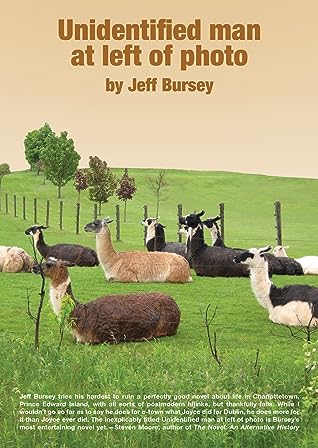 Unidentified man at left of photo, a fill-in-the-blanks novel mercifully free from characters to warm to and without tiresome plot points to retain, features artistic foibles, domestic strife, questions galore, a catastrophic hurricane, and a narrative voice that veers from mean to genial as it explores whatever topics come to mind and spills into the open what’s been overheard in public conversations in Charlottetown, PEI.

“Jeff Bursey tries his hardest to ruin a perfectly good novel about life in Charlottetown, Prince Edward Island, with all sorts of postmodern hijinks, but thankfully fails. While I wouldn’t go so far as to say he does for c-town what Joyce did for Dublin, he does more for it than Joyce ever did. The inexplicably titled Unidentified man at left of photo is Bursey’s most entertaining novel yet.” —Steven Moore, author of The Novel: An Alternative History

“I’m telling you now, Bursey, you use more than one paragraph of this letter of complaint to promote that nit-picking piece of crap you call a book and every page of my next book will be an excoriating explication of your entire oeuvre.”—Wayne Johnston, author of The Mystery of Right and Wrong

“Bursey has written a satire of PEI life that’s both under-developed and over-exposed. Mine is called The Crack in Everything or The Island Gospel According to Samson Grief and is so much better.”—Steve Mayoff, author of Our Lady of Steerage

Unidentified man at left of photo, a fill-in-the-blanks novel mercifully free from characters to warm to and without tiresome plot points to retain, features artistic foibles, domestic strife, questions galore, a catastrophic hurricane, and a narrative voice that veers from mean to genial as it explores whatever topics come to mind and spills into the open what’s been overheard in public conversations in Charlottetown, PEI. 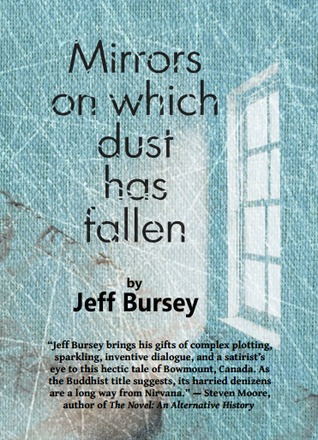 Jeff Bursey, Mirrors on which Dust has Fallen. Verbivoracious Press, 2015.
Rules are ticklish things; perhaps even worse is the contemplation of their absence. The notion of the “plotless existence” is introduced late into Jeff Bursey’s tricky, unpredictable, humane second novel, Mirrors on which dust has fallen:*
. . . For instance, this morning I was pondering the question of the plotless existence.
— The what? The—
— It comes up from time to time. We each have these black dogs howling around us. Don’t you have one? Don’t you worry about where you’re going?
The way it’s framed by the obnoxious Jules Deeka, he could as easily be talking about the “purposeless existence,” and indeed, purposeless would be the standard frame for those “black dogs howling around us.” I take this elision, from plotless to purposeless, to lie at the heart of Mirrors. It’s built into the book’s formal strategies and abeyances, its small-town motley and prim subversions (the small-r revelations of which are one of its more serious pleasures). Is “plot”—the need for stories—inevitable to consciousness? We inhabit narrative throughout our lives, it seems, we wear our plots and pretenses like we do our clothes and the falser these stories seem, the more we cling to them. A kind of Gaddisfied Our Town, Mirrors doesn’t so much abandon plot as keep it within hailing distance. Bursey’s genial sprawl creates the impression that with a few recalibrations—applying more weight here, curbing conversational fat there—one could in fact have a wealth of story. It’s a matter of what rules one applies.
In any case, the conversation above moves onto matters of faith. Unsurprisingly: Mirrors is full of conversions, apostasies, betrayals and losses of faith, transitions (lots of transitions), and it shares some of its characters’ earnestness in confronting such changes. The title inverts the Baha’i exegesis of Christ’s urging that we “become as little children”:


That is why Christ has addressed the world, saying, “Except ye be converted, and become as little children, ye shall not enter into the kingdom of heaven”—that is, men must become pure in heart to know God. The teachings have had great effect. Spiritual souls! Tender souls! The hearts of all children are of the utmost purity. They are mirrors upon which no dust has fallen.

* In addition to being a novelist, Jeff Bursey is a free ranging critic and book reviewer. He has reviewed kindly my two books of fiction, and we correspond occasionally. I consider him a Goodreads friend, whatever the heck that means. - Marek Waldorf

“The characters are wholly relatable. As I also grew up in a blue-collar town not unlike fictional Bowmount, I am intimately acquainted with the sort of small-fish small-pond malaise on view here… Once I surrendered to the text, details and textures of everyday life washed over me in a beautiful swirl… [Bursey] is continuing in the tradition of the modernists here, a group who struggled to make sense of a broken world. In our world of shock, spectacle and infinite distraction, a modernist novel like Mirrors of Which Dust Has Fallen feels most au courant.”—The Literary Review (U.S.)

“This is a tough book to recommend broadly because it is that rare piece of literature that demands quite a lot of work from the reader. There are wonderful moments and genuine insights, there is dazzling prose, and there are well-drawn characters. But the style is also difficult to follow, the unattributed dialogue a formidable tangle to be unraveled. Readers up for such a challenge will be glad to have put in the effort.”—The Winnipeg Review 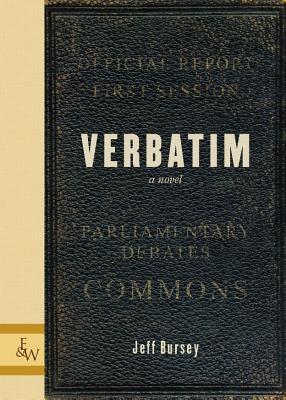 Verbatim: a Novel is a blackly humorous expos of parliamentary practice in an unnamed Atlantic province. The dirty tricks, vicious insults, and inept parliamentary procedures of the politicians are recorded by a motley crew of Hansard employees.

But when the Hansard bureaucrats begin to emulate their political masters, the parliamentary system’s supposed dignity is further stripped away. Jeff Bursey reveals in both high and low humour how chaotic and mean—spirited the rules behind the game of politics are, and how political ’virtue’ corrupts everyone.

"...a tour de force of verbal dexterity that wields irony so deftly that the book, despite its intimidating scale, both challenges and delights." — Dalkey Archive Press

"...an innovative and insightful narrative that is an uproarious read..." — Arts East

"Let the record also show that this is probably about the funniest intelligent book on politics you can get your hands on these days." — American Book Review

"...if politics is your thing, and if you have a taste for satire, then this would be just an ideal read." — Tales from the Reading Room

“…through his spirited gift for mimicry, [Bursey] illuminates how the procedures and protocols of governing are perverted to hinder action and fuel the ongoing fractures that only assist the powerful. [Verbatim: A Novel] is that quintessential chronicle that captures a time so deftly, as a reader, it’s like reading your own memories of it.”—Christopher WunderLee, author of Moore’s Mythopoeia

“We have a sense of the characters, their motives and their feuds. We have a sense of the province itself… it is also suffering through a lengthy and brutal recession with no relief in sight. There is a whole world created here, one with its own history and its own angst.”—Mark Sampson, author of All the Animals on Earth 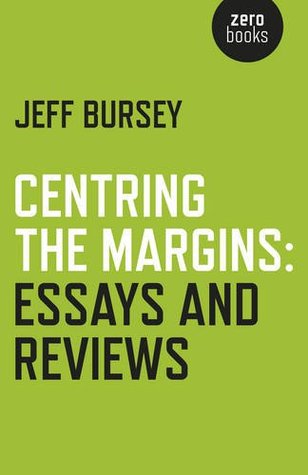 Centring the Margins is a collection of reviews and essays written between 2001 and 2014 of writers from Canada, the United States, the UK, and Europe. Most are neglected, obscure, or considered difficult, and include Mati Unt, Ornela Vorpsi, S.D. Chrostowska, Blaise Cendrars and Joseph McElroy, among others.

“…[the] breadth of [Bursey’s] reading is impressive… lending credibility and authority to his reviews, both individual reviews of books he has clearly carefully considered (both text and context) and the assembled reviews as a whole, which collectively leave the impression that their author reads comprehensively across formal and linguistic boundaries, and against the grain of entrenched assumptions about what books are worthy of our attention.”—Daniel Green, author of Beyond the Blurb

“Bursey is just such a patient and actively participating reader, repeatedly demonstrating these qualities to marvelous effect in his criticism. Centring the Margins is the perfect title for this smart, generous, empathetic book… Bursey’s analyses and conclusions set him apart, distinguish him as a singular critic, one who balances aesthetics and politics, one as equally enamored of artful sentences as of playful disruptions of narrative form.—John Madera at Big Other

at November 19, 2020
Email ThisBlogThis!Share to TwitterShare to FacebookShare to Pinterest
Labels: Jeff Bursey

Jeff Bursey - a fill-in-the-blanks novel mercifully free from characters to warm to and without tiresome plot points to retain, features artistic foibles, domestic strife, questions galore, a catastrophic hurricane, and a narrative voice that veers from mean to genial as it explores whatever topics come to mind