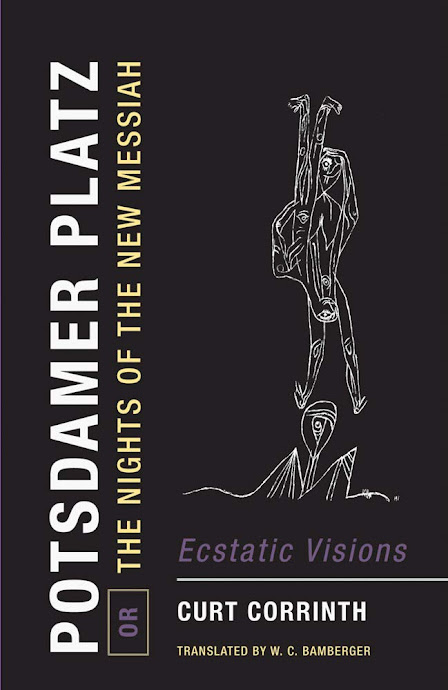 Curt Corrinth, Potsdamer Platz, Or, the Nights of

The book’s provincial protagonist, Hans Termaden, arrives in Berlin, where he quickly evolves from city rube to sexual messiah as he converts prostitutes and virgins into sensual warriors and frees men of sexual inhibitions. As word of his exploits spreads, people throughout the city flock to his headquarters in Potsdamer Platz, turning all buildings into brothels as Berlin itself swells with an influx of population from England, France, and Mexico. Police and army attempt to bring order but themselves defect to take part in the spreading copulation as Corrinth’s prose itself begins to fragment and melt on the page.

Decried in its time as tastelessly over the top and more erotomaniacally obsessed than ecstatic in its vision, Potsdamer Platz today reflects its turbulent era and can be read as a portal into the cultural excesses of Weimar Berlin. This first English translation includes the original illustrations done by Paul Klee for the book’s 1920 deluxe edition.

The story is simple: Hans Termaden comes to Berlin from the provinces, gets a taste of (and for) the big city, its freedoms, and, in particular, sex -- and he runs with it. He becomes a Messiah, his guiding principle sexual gratification -- not just above all else, but simply as all. It's not a hard sell: "he created more happiness than any human law was previously able to do".

His message quickly catches on:

all, all, all: praising the new covenant of the new messianic world: they blossomed, ardent, toward the higher purpose.

Everyone flocks to Berlin -- "Express trains thundered, incessantly, the awaking ones to paradise"" --, eager to follow the new true way:

Paris was depopulated, deserted; London mourned the Queen's abandonment; harems in the Turkish capital crumbled and emptied before sobbing eunuchs [...]

Berlin, on the other hand, our beautiful stronghold, registered a tenfold increase in population.

Of course, there are those who can't get with the programme -- and who come to threaten its happy success:

These were the danger.

And so, indeed, comes the counter-revolution.... Can the Messiah triumph over the: "old order, surviving in a corrupted state" ?

Yes, it's all very over-heated. The initial sexual release leads to a gush and then a torrent -- so also the narrative itself, reflected also in Corrinth's language, the account often a frenzy of words. It's all a bit -- and then much -- too much, but some of this does work well -- not least that first dawning of what sex can be and hold in Termaden's first experiences:

Corrinth tries to drown the reader in this ecstatic excess, his writing a breathless rapid-fire flood of language twisted solely to these higher, baser purposes:

Hymnic new will boldly set out lived and living truths before the squealing ones, openly giggling and blushing, secretly triggering whirling carnal excitement and lechery-soaked visions.

Grammar itself is too conventional and rigid for what Corrinth wants to express and convey, and so he constantly pushes against its boundaries and even breaks some of the rules -- an effective technique (ably reproduced in W.C. Bamberger's translation), helped by the fact that Corrinth doesn't take things too far.

It is all quite ridiculous, too, and, honestly, not really good, even (though it certainly has its moments). But seen in its historical context it is certainly intriguing: Bamberger quotes Otto Karl Werckmeister's observations on the novel in his Introduction, specifically on the (potential) publication-date, and how the book can be seen differently depending on when it is placed: wartime Germany in early 1918 (when it could be seen as: "an act of cautious subversion under the threat of censorship"); the fall of 1919 (when it might be seen as: "a convenient mockery of political failure"); or in between, during the German November Revolution, when it might be seen as a commentary on those events.

Corrinth's vision of an ultra-decadent Berlin prefigures the Weimar image of the city, suggesting just how much was already bubbling under the surface even in that exhausted, impoverished time immediately after the war; it would seem much more a text from well into the 1920s than 1919.

Paul Klee's accompanying drawings are the main reason the work is still remembered, and it's good to see these here as well, a neat complement to the story -- capturing much of the unbridled wildness to it (if not so much the sex).

Potsdamer Platz is a curious work, and it does have the appeal of something taken to absurd extremes, in its language, philosophy, and basic plot. Short and brisk, it doesn't get mired in its own excess (though it can at times seem that excess is all there is to it ...); it does perhaps suffer some from its story being a bit underdeveloped. Still, Corrinth seems very much to have managed what he was going after -- blindingly bright ecstatic visions of a world in which sexual indulgence is the highest and overwhelming guiding principle. - M.A.Orthofer

Curt Corrinth (1894–1960) studied law until serving in the military in World War I, which resulted in his embracing an antiwar and anti-bourgeois stance through his poetry and then through a series of frenetically composed novels. Influenced by Freud’s maverick disciple, Otto Gross, Corrinth took Gross’s doctrine of free love to further, near parodic extremes in these novels, three of which would be banned by the Nazis in 1933. In 1955, he moved to the GDR in East Berlin, where he died five years later, his work all but forgotten in the western world.

at June 11, 2021
Email ThisBlogThis!Share to TwitterShare to FacebookShare to Pinterest

Lukáš Likavčan - The book looks at the way we envisage our planet through cultural artifacts, in order to ask questions such as “For what Earth do we design?” or “What geopolitical tendencies does our imagination of Earth endorse?” 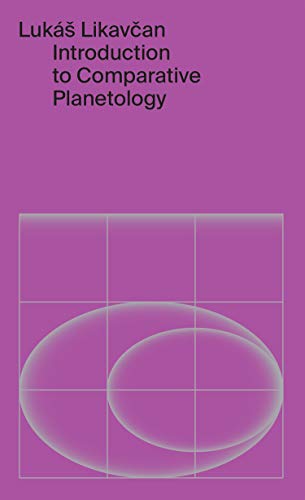