Jennifer Boyden - From the throats of herons and lost wolves, we learn of a mistake made by the gods 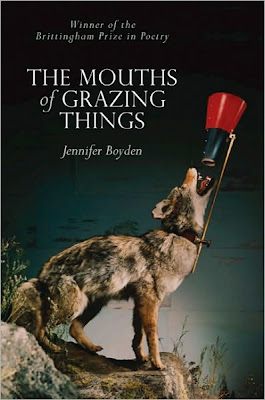 "The Mouths of Grazing Things is an unflinching, lyrical meditation on nature’s forced exodus from the human, and the forms of longing, estrangement, magnetism, and self-otherness that ensue. Arrestingly tender and fiercely protective of where nature lurks in and out of us still, Boyden translates for a new landscape where a brain in a jar is anchored by an apple, a fly-tying fisherman finds love songs to fish scattered among the barber’s sweepings, and the players at “the most dangerous playground in the world” prepare for anything with one fist clenched and the other full of sugar. In poems built to survive an unsafe journey, this book delivers the now-beyond, the almost-was, the near-forgotten, and the just-in-time."

"I’ve literally been waiting years to read Jennifer Boyden’s The Mouths of Grazing Things. I mean it: years. It’s been awhile since I’ve had my ear real real close to literary magazines, since I could open issues of Cimarron and Ploughshares and Colorado Review and know like half the names, even of (especially of) the folks who hadn’t yet published a book, but who’d been, in the small work of lit mags, blowing up.
I got into Boyden, in fact, because of something like that: I read her work in an issue of Cimarron and read her poem “The Magician,” (I’m stealing from myself on this: I wrote an essay about the woman and her work years back for a small St. Paul, MN lit journal called Whistling Shade–it’s all here), and was dumbstruck. We got to be friends through a mutual friend, and she sent me a manuscript that ended up not getting published (though that ms had many of the poems now in The Mouths of Grazing Things), and I’ve still got the ms, have kept it close, have loved it for all the reasons anyone loves a poetry ms (though maybe more so because it was unpublished. Helen DeWitt’s upcoming Your Name Here is available for sale on her website, or used to be, and I’ve had that for nearly 3 years now and it means as much to me as it does both because it’s a tremendous book, but also because it, too, is unpublished [still, for now—though Noemi Press is coming out with it soon]). Anyway.
But now this, The Mouths of Grazing Things, and Boyden getting the attention and recognition she and her work deserve! And can we all admit that the UW Prizes are just incredible? Nick Lantz won along with JB this year, but flip to the back of either book and see the win-folk from years past–Hicok, Olena Kalytiak Davis, Renee Ashley… just a phenomenal thing. Anyway, Boyden.
This may be the most physically rich book of poems I’ve seen in a long time, a lushness attendant throughout that waves absolutely toward a love of and reverence toward the physical, real world. Seriously, page through and draw sentences like arrows from a quiver:
I am sawing again through
the storm’s fallen trees. (“Regret”)

When the grouse startled from the brush, the moss.(“The Moss Breathes Back”)

I was to come up with the words I’d need
and practice them until they did not answer back.
But nothing I found held the raggedness
of light hunched against my window; no words together
spoke the sound of a bleeding tongue. (“Floating Even Now”)
That last bit from “Floating Even Now,” the idea of trying to find a language with which to sufficiently square the experience of existence: this is Boyden’s land, much as it’s Ammons’s land (whose lines she uses at the book’s start). There’s an infinity of delicacy and care in her word-choosing, yes (it’s poetry after all), but there’s more to it, too: Boyden sees carefully, she witnesses carefully. “I showed God the pool of fish because / he said no one thought he had a sense of humor. Look, // I said, these are funny—flashy / kissers, the silver darts of them.” (“Relying on What I Know of How the Hidden Feels, I Advance a Theory”).
Because look, here’s the thing: Boyden’s poetry, poem-by-poem and all muscled through The Mouths of Grazing Things as a whole, is soft and receptive, soft in a strong way. Does that make sense? It’s not surprising at all that her subjects end up being things like moss and birds, minnows and tress: these are natural elements both fragile and overwhelming, both individually precious and, as groups, more secure.
And, if one’s inclined, one can see Boyden’s book—and books like Boyden’s (meaning: books of poetry deeply invested in lived-life, books that eschew breezy cleverness and/or linguistic trickery, books which may make you laugh but are rarely trying to joke)—as being like these living things Boyden’s work focuses on. There’s danger in that focus, of course: it can be easier and more publishing-world palatable to create poetry that’s all rah-rah fireworky word stuff, work which extends itself not from or toward experience but to an intellectual (or funny, or defiant, or dismissive) consideration of that experience, and the difference between those two moves is profound (for an easy vs., if you’re looking for one, read Seidel and Boyden back to back—they seem real good markers of how the division works on the page).
What Boyden offers in her book is achingly, infinitely rare: she’s offering care, present-tense, I-am-in-the-world care. Books like this seem bound to be pretty quiet, and bound to resist the easy sputtery of Attention! and Notice! (I mean, for god’s sake, look at the title: Grazing things, meaning sustenance as ongoing/small-scale routine, meaning enrichment and nourishment and little-by-little). Maybe that’s for the best–I haven’t the faintest.
What I do know, for sure, is that Boyden’s book is something to hold dear, and to keep close. Boyden’s work, and The Mouths of Grazing Things, are acts of infinitely valuable quietude, of not stillness but work which stills, and this is a profound thing, the way her words can still. It’s too easy to close this by mentioning the ever-faster and -louder world, and how Boyden’s work is magic teleportation from such dins, but it’s better than that: the quiet world of which she writes, and which she offers, is not elsewhere but here, it’s beneath the loud, beneath the more-ness of things. Her book is a primer, a flashlight, a pick: a tool to help us find that quiet more and again." - Weston Cutter

"From the throats of herons and lost wolves,
we learn of a mistake made by the gods.
They gave us red-winged birds and vesper
sparrows who make songs of leaf-light
and flying. The gods thought we’d be so happy—
all that fruit, one big garden,
our nakedness in sun and water.
They never counted on our needing a sound
for longing, too. They gave that to the loon,
to wild dogs whose teeth throb
from the light of the moon; they poured it
into the long necks of birds. How could they
have known? Where in our bodies
would they have moored the slender cry of the crane
who calls out that night is closing the sky,
taking away the glinted green
of the frogs’ moist backs, the dazzle the sun makes
of every hair, of every shining wing?"
Labels: Jennifer Boyden Weston Cutter