Mick Farren -Vinnie wants to sell me Hitler's Brain, The Aztec Calendar Just Ran Out, Just a Poor Dogpoet Who Finds Himself Locked Out Of The Cathouse 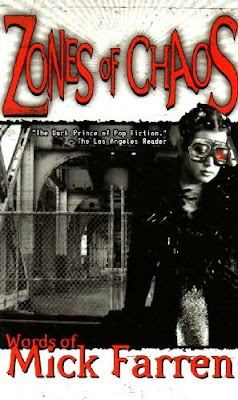 "Mick Farren is a legendary poet, musician, author, critic, activist, countercultural icon, and one of the last true gonzo journalists. Enter his paranoid, radical, drug-addled and excruciatingly beautiful world; go to jail during the L. A. Earthquake, meet Doc Holliday and take a ride in Diabolo's Cadillac. ZONES OF CHAOS is a maelstrom of poetry, prose, essays, lyrics, commentary, and fiction."

"Michael Moorcock's introduction describes this hallucinatory concoction of Farren's poetry, song lyrics, essays, short fiction and social commentary as a display case of his obsessions from demons to dope to the dangers and rewards of remaining alive in an increasingly berserk universe. In Enter the Swordmaid, vampire Victor Renquist encounters a woman with a sentient sword and gets a nightmarish glimpse into another dimension. The Voodoo Chile Experience is a psychedelic roller-coaster ride through extreme user fatal video gaming. Jailhouse Rock chronicles Farren's experiences in a Van Nuys jail during a major California earthquake. A 1975 comic book entitled Rock & Roll Madness shows an aging Elvis-like character becoming president. Farren is equal parts drug-crazed madman and poetic prophet, and his work both predates and transcends modern bizarro apocaliterature." - Publishers Weekly

"Mick Farren is one of the unsung heroes of the modern "underground" - writer, musician, journalist, anarchist, prankster and unrepentant sinner. A godfather of punk and heavy metal, his bands have shaped the music of two generations - He has worked with The Deviants, The Pink Fairies, Hawkwind, Motorhead and many more. As a writer, his dystopian visions helped lay the groundwork for much of what we now expect of science fiction, yet always with a smirk and sense of humor often missing from most recent books and films.
In "Zones of Chaos", Farren throws down with a collection of prose and poetry (and even cartoons) with titles like "Vinnie wants to sell me Hitler's Brain", "The Aztec Calendar Just Ran Out" and "Just a Poor Dogpoet Who Finds Himself Locked Out Of The Cathouse".
"Zones" is an outwardly chaotic mixture of lyrical storytelling, but each piece in the book is a gem, strung together on a broken guitar string that changes quickly from a charming necklace to a garrote, and back again. In" Jailhouse Rock" he tells the tale of spending the Northridge Earthquake locked in the Van Nuys jail. The story, in seven short pages, has it all- drama, humor and biting social commentary. The poem "Anthropomorphism", a eulogy to cartoonist Edward Barker, is full of sweetness and anger, and "Envy" tears apart rock'n'roll idolatry in a mere hand full of words.
Farren is unafraid to show his roots and cultural references- reading his work is like watching a great poker player playing an open hand. No tricks, no secrets, no bluffs- just raw talent, well-honed skills and a lifetime of experience that tells him what to throw out, what to keep in, when to fold early, when to go all-in.
The great Michael Moorcock, in the introduction to "Zones" describes Farren's work best - "Mick Farren is an original. Read him and rage. Read him and laugh. Read him and weep. He still has more energy, more life and more creativity than most of those who have come after him. And He's still ahead of his own game. Doing what comes naturally. Cocking a snoot at convention. Telling it like it is. Living in a present made incandescent by his very existence. Showing just how good it is to be alive. " - Ricardo Feral
Labels: Mick Farren