Tim Horvath - Swirling ode to maps, dreams, and the redemptive power of fiction: how stories are conjured from anywhere and nowhere at once 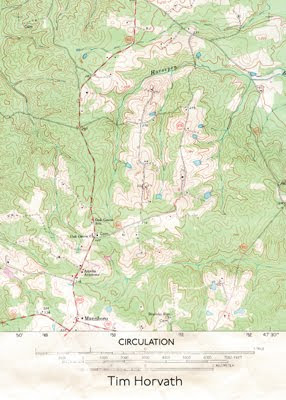 "When we were awash with youth, we were all led to believe that our father was assembling a book called The Atlas of the Voyages of Things."

"Reading Tim Horvath's novella Circulation, one imagines what it might be like to go spelunking with Jorge Luis Borges or to shelve books with Scheherazade. In this swirling ode to maps, dreams, and the redemptive power of fiction, the stories proliferate vertiginously. At their emotional core is the quest of the main character, a humble librarian, to understand both his father and himself."

"Tim Horvath is a writer of encyclopedic knowledge, generous wit, and a master of the artful digression. Circulation is, to borrow from its very pages, 'marvelous, intricate, globetrotting.' Horvath writes with great compassion and an embracing love for the world and all traveling in it. - Alexander Parsons

'Eminently mullworthy,' Tim Horvath's Circulation is a glittering performance of the narrative imagination, an elegy for books and libraries as we have heretofore known them, and a profound meditation on death, family, language, and the limits of human knowledge--all this disguised as a contemporary parable, a book of modest length." - David Huddle

“... Horvath uses his fiction to expose the tension between reality and fantasy in modern life. The uncertainty between where one begins and the other ends is used to explore the ever changing way in which we as a people define and record the facts. In questing after the facts, Circulation gives the reader a chart to navigate a reality clearly inherited, but less clearly defined." — New Pages

"Tim Horvath uses his novella Circulation, as an index of intriguing hypotheticals; through addressing a dying father, himself an aspiring writer, he writes around two literary projects: one extant, the other perpetually in process. The first is a treatise on the poetics of caves. This book, presented as too arduous to read, turns out to be well worth reading about. The second, The Atlas of the Voyages of Things, exists only in scribbled note form, and highlights the more dissonant aspects of the character of the father--dying and in need of redemption both as a writer and a parent. Since the main character, Jay, is head of circulation at a local library, he is responsible for constructing stories about where his father's single published book has gone or might go. The dying man listens silently as his son constructs the possible journey of his father's legacy, and, using this framework, Horvath manages to pack a handful of great potential stories into one text without needing to write all the way through any of them. Perfect for an afternoon of quick rumination." - Sean O’Connell

"About a month ago, I won a copy of Circulation, a novella by Tim Horvath, in a contest sponsored by What to Wear During an Orange Alert. I entered because the publisher, Sunnyoutside, released one of my favorite collections a while back, Breaking it Down, by Rusty Barnes, and because I knew that Horvath was a fellow alum of the Writing Program at the University of New Hampshire. So this book had to be good.
And it is. Horvath writes a bit like Paul Auster, using digression and coincidence and a charming expository style. The narrator, who we learn is a Director of Circulation at a small public library, recounts his father’s failed attempt to produce a book called The Atlas of the Voyages of All Things. Though much family time was devoted to researching and exhaustively discussing the book, it’s possible that the father—evocatively named Gus Pardo—had written only the bloated dust jacket copy for the book, which he described as “a lavishly illustrated book that documents the marvelous, intricate, globetrotting chain of events by which things come to be what and where they are.”
The family falls apart undramatically. The narrator, his brother, and mother move on, but Gus is left to pursue his writing fantasy, a sort of failed Edward Tufte. When and aging Gus enters the hospital with a final illness, the focus shifts to the book he was able to produce in his lifetime, Spelos: An Ode to Caves, a 137-page, self-published spelunking memoir. Gus is curious about the life his book has had in his son’s library. Horvath’s Director of Circulation provides a disheartening précis on the life of books (“books go unread, tumble out of print, serve as doorstops”) then delivers to his father several extended deathbed fictions about the men and women who have checked out Spelos over the years. The narrator jokes that he is like Scheherazade, but the stories he’s telling keep his father alive.
Circulation is a warm-hearted novella that celebrates storytelling and the writer’s drive to tell stories. It’s an engaging story about how place inspires narrative, how stories are “conjured from anywhere and nowhere at once.” In the end, we follow the Director of Circulation, book in hand, into the cave of personal myth and family legend. And like him, we emerge without the book but with the story." - William Walsh

"Tim Horvath, a recent graduate of the University of New Hampshire MFA program, has penned a short novel “Circulation.” It deals with a young Circulation Director at a town library, and his past relationship with his late father. His father was a dyed-in-the wool eccentric with a capital “E”, who held close to his breast a never completed opus: “The Atlas of the Voyager of Things.” It is described as an impossibly all encompassing work: “That documents the marvelous, intricate, globetrotting chain of events by which things come to be what and where they are.” The father did complete an arcane book “Spelos, An Ode to Caves” that had a small, but loyal cult following.
The father in this novel reminds me of a character in Joseph Mitchell’s nonfiction account of eccentric New Yorkers “Up at the Old Hotel,” Joe Gould. Gould went to New York City and worked as a reporter in the 1920’s for the New York Evening Mail. During his time at the newspaper, he had his epiphany for the longest book ever written. He would title this book An Oral History of Our Time. The book was supposedly based on a word for word account of people’s lives, which Gould had listened to. The book never existed, but Gould insisted, often raving in the streets of Greenwich Village, that he was feverishly working on it.
The casual reader and the bibliophile will love this book. It traces these men’s lives through their obsession with books and arcania. Here is an inspired passage that describes the son putting himself in the place or, well, the jacket of a old, underused, book:
“… likely it has sat on the shelf next to its companions, growing old, peering out at the movements of patrons, sizing them up perhaps just as readily as they are sized up. Yes, I know it sounds strange—you might conclude that I, and not my father, was the one suffering from delirum, but I have occasionally tried to take the perspective of the books on my shelves, imagining that they choose their recipients as much as they are chosen. Like animals in the wild, they can, I suppose, camoflauge themselves such that at times they blend in with their surroundings as readily as a tree frog, hugging the walls of the shelves around them, appearing less palatable than the plump bestseller they lean against… Or like abandoned puppies in a pet store… perhaps l, like these books, can only hope to make an impression—they can poke themselves out just a bit further, than the nearest competitor, jutting forth an irresistible moist black nose between pouting eyes.”
And here is a description of a library in Borge’s fiction “Library of Babel” that describes the life of the book, and thusly the life of man:
“One of the most striking stories I read when I was in college was Borge’s “Library of Babel”, and on occasion I have thought myself the proprietor of that very library. Borge’s library is a metaphysical marvel, a library that essentially comprises the whole of the universe—the universe as library… Within the library that Borges conjures, not only is every book written shelved somewhere but every possible book is shelved…The conceit is too dizzying to think about too long, but it serves as a good antidote to certain fundamental realities: funds are limited, books go unread, tumble out of print, serve as doorstops—all too effectively I might add; the greatest libraries of civilizations burn down, suns collapse…And each life is limited…there is only so much reading that one can consume in the course of a lifetime…” HIGHLY RECOMMENDED." - Doug Holder

"Last year my father passed away at the age of 51, but I had lost him nearly twenty years earlier. Through a child's eye, I thought he was a superstar, radio personality, music engineer, musician, and song writer, it all seemed logical and real. I would go on remote broadcasts, sit quietly in the studio as he qued up vinyl and spoke to what I thought was the world. Our apartment was filled with vinyl and demo tapes. When he left, I'm sure he thought he was pursing his dreams, but he didn't realize all that he had accomplished in my mind. At his funeral, placed on a plastic pedestal was a black binder that was his songbook. I eagerly grabbed the book in spite of my anger and confusion, and began to flip though the notebook pages. Their was probably 100 pages in the book, but only seven were filled. Seven, fifty years boiled down to seven songs of questionable quality.
I had carried that image with me for nearly seven months, but it all became clear when I read Circulation by Tim Horvath. This novella is written from a sons point of view, as he recalls his fathers life long quest to write and publish a book called The Atlas of the Voyages of Things. It is a story about coming to understand who your father is and in the process discovering how you truly feel about yourself. It is a book filled with symbolic gestures and storytelling, but at its core it is filled with heart." - What to Wear During an Orange Alert?
Labels: Doug Holder Orange Alert Sean O'Connell Tim Horvath William Walsh