Making the Walls Quake as if they Were Dilating with the Secret Knowledge of Great Powers - A multidisciplinary reader on sound, space and architecture

Making the Walls Quake as if they Were Dilating with the Secret Knowledge of Great Powers, Michal Libera and Lidia Klein, eds., Zachęta National Gallery of Art, 2012.


A multidisciplinary reader on sound, space and architecture, that accompanies the exhibition of the same title in the Polish Pavilion at the 13th International Architecture Exhibition—la Biennale di Venezia. The texts were selected by the curator of the exhibition Michał Libera, together with Lidia Klein, and the publication was designed by Czosnek Studio. The book features an interview with the artist, Katarzyna Krakowiak, contributions by the editors, as well as a selection of theoretical analyses, essays, poems and music scores by Barry Blesser and Linda-Ruth Salter, Samuel Taylor Coleridge, Francis Bacon, Gilles Deleuze and Félix Guattari, Steve Goodman, Bohumil Hrabal, Bernhard Leitner, Alvin Lucier, Max Neuhaus, Georges Perec, Steen Eiler Rasmussen, Bruce R. Smith, Jonathan Sterne, Georges Teyssot, Emily Thompson, Shelley Trower, David Toop and many others.

A truly excellent compendium, assembled to accompany an exhibition by Katarzyna Krakowiak at the 13th International Architecture Exhibition in Venice, dealing with the intersection of sound and structures. The selections range remarkably widely, from Samuel Coleridge to Toshiya Tsunoda, but are almost always on point, offering historical, theoretical, political and philosophical observations on sound as it's experienced within architecture.
So there's a fascinating piece, by Karin Bijsterveld on the lineage of noise prohibitions and safeguards in Holland as cities became more crowded and industrialized and one by John Locke (not the philosopher) on eavesdropping. Brilliant works by Shelley Trower on street noises and the cataloguing of same in 19th century Britain and one by Lamberto Tronchin surveying architecture's attempts to enhance sound within. A very fine essay by David Toop, culled from his "Sinister Resonance" volume ("Architectural Sound") on the mysterious ways sound travels through building materials and the psychological effects therein has special...resonance. One could go on.
Interspersed among these are brief extracts of thoughts from sound artists including Toshiya Tsunoda, Jean-Luc Guionnet, Alvin Lucier, Eric La Casa and others, as well as very intriguing conversations with Bernhard Leitner and Mark Bain, causing this reader to become quite interested in experiencing their work.
Unlike most such collections, there's nary a disappointing entry to be found--a seriously solid volume and one well worth seeking out for anyone remotely interested in the field. Highly recommended. olewnick.blogspot.com/

at October 30, 2012
Email ThisBlogThis!Share to TwitterShare to FacebookShare to Pinterest

Alyssa Quinn - A hallucinatory exploration into the origins of humans and human language. Surreal, spiraling, and daringly innovative, Habilis is all at once a historical reconstruction, a psychological horror, a mystery, a ghost story, and a creation myth. But above all, it is a meditation on language, desire, and the stories we tell about ourselves—especially those that might unravel us 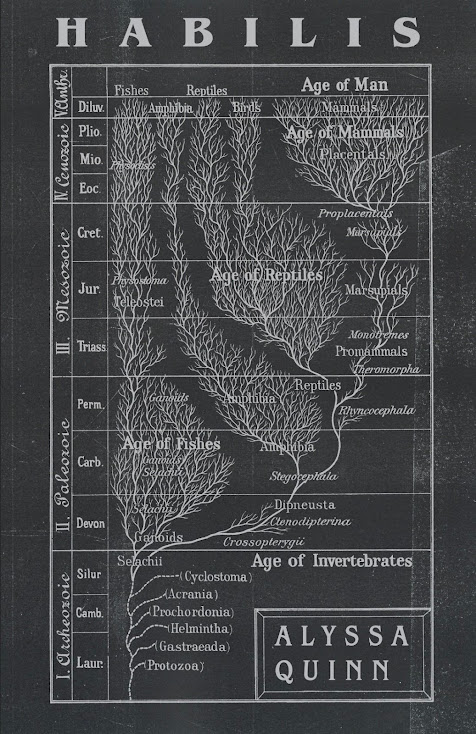