Jeff Jackson - a coming-of-age story for people who hate coming-of-age stories. The novel features a colony of feral children, teenage oracles, mysterious cassette tapes, and a reclusive underground rock star. It weaves a moving tale of mad hope across a startling, dreamlike landscape 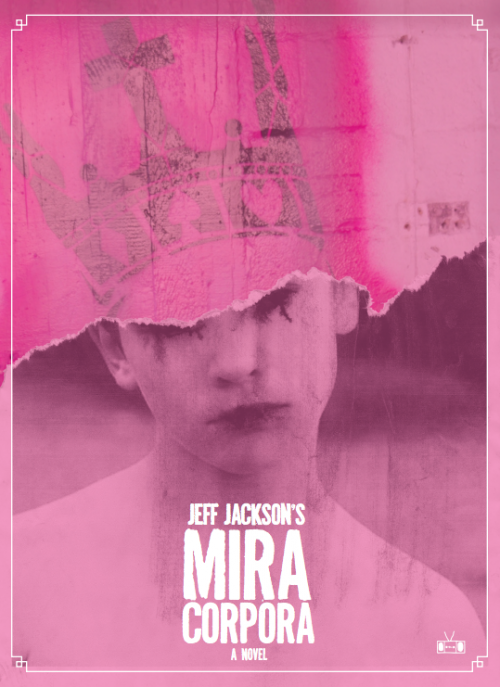 
Mira Corpora is the debut novel from acclaimed playwright Jeff Jackson, an inspired, dreamlike adventure by a distinctive new talent. Literary and inventive, but also fast-paced and gripping, Mira Corpora charts the journey of a young runaway. A coming-of-age story for people who hate coming-of-age stories, featuring a colony of outcast children, teenage oracles, amusement parks haunted by gibbons, mysterious cassette tapes, and a reclusive underground rockstar. With astounding precision, Jackson weaves a moving tale of discovery and self-preservation across a startling, vibrant landscape.

“Mira Corpora is fine work in its manic pacing and its summoning of certain cultural emblems. Present tense with a vengeance. I hope the book finds the serious readers who are out there waiting for this kind of fiction to hit them in the face.”  – DON DELILLO

“Jeff Jackson is one of the most extraordinarily gifted young writers I've read in a very long time. His strangely serene yet gripping, unsettling, and beautifully rendered novel Mira Corpora has within it all the earmarks of an important new literary voice."   – DENNIS COOPER

"Jeff Jackson is a fresh and startling voice in contemporary fiction--a hallucinatory realist whose prose has the scary energy of rock and roll, and who writes with the assurance of a born storyteller."  – DAVID GATES

"There is a scene in this arresting novel in which a group of feral teenagers experience ‘a hushed air of reverence when we confront the lurid and savage details’ of a painting executed by one of their own tribe. The reader would be well-advised to approach Mira Corpora in the same attitude. The prose, in the spirit of Dennis Cooper and Brian Evenson, reads like dispatches from the blackness of a Bill Henson photograph. Jeff Jackson has had his vision, and it is worth a good hard look."  - JUSTIN TAYLOR

"A beautiful and intense book, a grimy fever dream in the shape of the fictional autobiography. There is a mesmerizing episode involving a society of runaway children led by a teenage oracle, a cassette tape that might or might not call to mind certain elements of Infinite Jest, and a take-no-prisoners writing style that made me read the entire book in one sitting." - Andrew Ervin, TIN HOUSE


Trailer for Mira Corpora
I don’t know if it’s more confusing, funny, or depressing when people get their asses in a tear over whether a work of fiction was based on something that really happened or not. It’s like most people can’t be entertained unless the object of their pleasure is a thing that they can see themselves in and relate to. For me, the point of reading was never to learn about myself or even really about the world, but to experience something I couldn’t find in either of those places. To find something that actually extended the possibilities of both. I guess that’s why I tend to avoid art that seems too clearly set within the realm of self investigation, tending more often to be drawn toward work that finds ways to obscure fantasy and reality into somewhere weird.
Before Jeff Jackson’s debut novel, Mira Corpora, even begins it defines itself in contradiction. There is the typical disclaimer for works of fiction: “All names, characters, places, and incidents are products of the author’s lively imagination,” but on the next page a note reads: “This novel is based on the journals I kept while growing up… Sometimes it’s been difficult to tell my memories from my fantasies, but that was true even then.” Such is the first of several enveloping mechanisms at work in the novel, the main body of which consists of seven parts, each following the life of a narrator who shares the author’s name.
The narrator’s life seems both wholly real and wholly unreal. As we follow him from location to location, set at ages six to 18, we find him pushed as if from one owner to another—a child among packs of dogs in a dark forest; in a house with an abusive, knife-wielding mother; in a village of occult squatters where death seems lurking; through teenage obsession with cryptic music and forced experience as a sex dummy. Throughout it all the narrator searches for something that is his, but finds only more connections to further worlds with nothing of him in them.
There are few coming-of-age-esque novels that don’t make me feel like I’m being lied to, manipulated into caring to the point where I can’t care at all. Mira Corpora is one of those few. It subverts itself and what it came from so many times that by the end you feel like it could have existed no other way. - Blake Butler


We recently signed the debut novel from acclaimed playwright Jeff Jackson. The book is called Mira Corpora, and follows a young runaway on a dreamlike adventure, during which he encounters a colony of outcast children, teenage oracles, amusement parks haunted by gibbons, mysterious cassette tapes, and a reclusive underground rockstar.


An excerpt from Mira Corpora

In the following days, the other kids in camp avoid Daniel and Nycette. Both their bodies give off a rank and fleshy odor. Even the canines aren’t sure how to deal with the smell; their carrion instincts are scrambled and they can’t decide whether to make a move. Nycette and Daniel are too pleased with themselves to care. They’re often seen together on nightly strolls talking cosmology in the meadow. A pack of dogs always trails a few paces behind, their noses vibrating.