Daniel Spoerri one day mapped the objects lying at random on the table of his room, adding a rigorously scientific description of each. These objects subsequently evoked associations, memories, anecdotes; not only from the original author, but from his friends as well 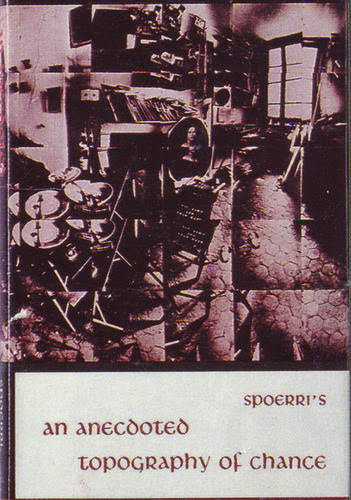 An Anecdoted Topography of Chance is arguably the most important and entertaining “Artist’s Book” of the post-war period. This edition is the definitive appearance to date of a unique collaborative work by four artists associated with the FLUXUS and Noveau Réalisme movements, and is substantially larger than the three previous versions published in France, the USA and Germany.

What is the Topography? Hard to explain an idea so simple yet so brilliantly executed. Following a rambling conversation with his dear friend Robert Filliou, Daniel Spoerri one day mapped the objects lying at random on the table of his room, adding a rigorously scientific description of each. These objects subsequently evoked associations, memories, anecdotes; not only from the original author, but from his friends as well: a beguiling creation was born. Many of the principal participants of FLUXUS make an appearance (and texts by Higgins, Jouffroy, Kaprow, Restany, and Tinguely are included, among others). It is a novel of digressions in the manner of Tristram Shandy or Robbe-Grillet; it’s a game, a poem, an encyclopaedia, a cabinet of wonders: a celebration of friendship and creativity.

The Topography personifies (and pre-dates) the whole FLUXUS spirit and constitutes one of the strangest and most compelling insights into the artist’s life. From out of the banal detritus of the everyday a virtual autobiography emerges: of four perceptive, witty and eloquent members of the human species.

The map of the table-top has been reproduced as a fold-out at the back of the book. -
www.atlaspress.co.uk/

No one reads Daniel Spoerri, a visual artist known for his snare-pictures, and also the author of a classic literary snare-picture, An Anecdoted Topography of Chance—an unfortunately difficult book to track down.
The premise of An Anecdoted Topography of Chance is simple: the map above is of Spoerri’s room, drawn on the afternoon of October 17, 1961. After numbering the items in his room, the author set out to inventory each object, providing in the process an autobiography unlike any you’ve read. Each page lists a single object (illustrated by the inimitable Roland Topor) followed by an entry describing the object. Sometimes laconic:
44 Very Pretty Dark Blue Bottle
with a large neck, bought in a shop opposite the Galerie Raymond Cordier, rue Guenegaud, one day when for no apparent reason I visited the gallery; said bottle is topped by a socket and bulb, the whole forming a bedside lamp.
And at others elaborate, like number 66, a bottle of Sauze (a cologne), to which are appended three footnotes and five pages of text that ends with the following anecdote:
I myself was so drunk that evening that I’m certain it was there I infected my finger, and not in the door of a taxi, as I once supposed; after two days the infection had spread almost up to my shoulder, and I was sent to a doctor: if I had come two days later, he said, I probably would have died of blood poisoning.
To get a better idea of how the book works (and to see how easily it could be adapted to an online text), see this page.
And for an article about “chance art,” see Dario Gamboni piece in Cabinet Magazine.
- writersnoonereads.tumblr.com/


On the Various Trappings of Daniel Spoerri by John G. Hatch

Daniel Spoerri, with the help of his very dear friends Robert Filliou, Emmett Williams and Dieter Roth, with drawings by Topor, An Anecdoted Topography of Chance. Atlas Press, 2016.

By now the Topography should need little in the way of introduction, but a quick recapitulation of the background to our edition of this work will serve as a reminder of what it's all about. One day in 1961, Daniel Spoerri mapped the outlines of the various objects lying randomly on the table in his room, using tracing paper and taking care to include even wine stains and the debris of broken eggshells, and then added a key which consisted of a factual documentation of each item's description, origin and any persons associated with it. This first version of the Topography came out three months later in lieu of an exhibition catalogue for Spoerri's show at the Galerie Lawrence in Paris, as a booklet of 54 pages. Robert Filliou had helped Spoerri with this, and a couple of years later Emmett Williams began translating it into English, with this edition later appearing under the Dick Higgins imprint of Something Else Press, in New York.
In the course of this translation work Williams was moved to add notes to the plain object descriptions, as Spoerri also added notes of his own, and on occasion the two provided notes to each other's notes, while Topor added his pictures of the listed items. Four years on, the German translation by Dieter Roth appeared, furnished with further notes and anecdotes by him, and more again by Spoerri, as the book continued to grow. In 1995 all of these texts were collected together for the first time in the Atlas Press edition, along with new material in the form of annotations by three of the authors (Spoerri, Williams, Roth), a new and extensive Introduction and several photographs.
If that summary accounts for the book, it gives next to nothing away about the book's contents, for the reader soon discovers that from such a disarmingly simple original idea that map of the table's features reveals a landscape of reflections and associations, memories and counterpoints, that bring in all manner of connections with the world around us. The anecdotes branching off from the individual objects repeatedly fascinate, inform and entertain in their different measures, all held together by the camaraderie and bon esprit of the book's authors. Furthermore, a cast of characters from the contemporary art world, and from outside it, animate the text through their own contributions or participations, as is clear from the substantial index (which is very much a correlate to the main text itself). In all this, the Topography both embodies and pre-dates the spirit of Fluxus, with which its authors and many of the key names mentioned in the book are linked, and indeed its appeal succeeds in reaching far beyond the confines of an art movement to become something that touches us all with its celebration of creativity and humanity.
This new edition takes the text of the earlier Arkhive edition and re-casts it into our hardback format, with the addition of illustrated endpapers showing the map, its original drawing and Spoerri's room. To conclude, we add here the review for the 1995 edition that was written by Richard Hamilton: