Gábor Schein - Péter makes contact with his dead father one last time and conducts a conversation with him that would never have been possible during his lifetime. In his life he was missing the language; in death it is the only thing that can resurrect what never was 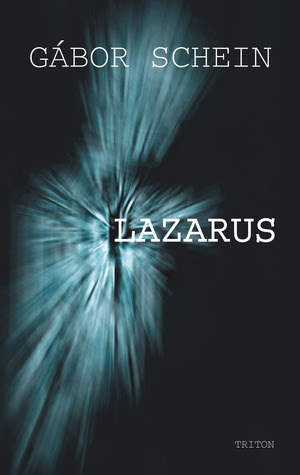 Lazarus, an unflinching investigation of what it means to be the child of Holocaust survivors in postwar Hungary, is Gábor Schein's second novel.

Will I visit your grave? Is there anything there? If there is, it must be, I believe, something utterly different from what is engraved upon the headstone: may the deceased be tied to the bonds of eternal life. Rather this: totus homo fit excrementum. As all else in self-loathing, you hurried this up, making it happen while you were still alive.

Gábor Schein has a miracle occur in his novel. Péter makes contact with his dead father one last time and conducts a conversation with him that would never have been possible during his lifetime. In his life he was missing the language; in death it is the only thing that can resurrect what never was. There is a story to tell and questions to answer. In order to accomplish this, Péter writes a book, therefore becoming the author of his own past. With this he breaks the prohibition that the father - who robs himself of his voice the last two months of his life - issues to the son. In order to depict the family story, the first-person narrative shifts levels: He jumps from the intimacy of a two-person conversation into a narrative outer view. In that he names himself Péter and his father M., the memory gains reality; only then does the story reveal itself as a continuum. With this artistic arrangement, Schein creates an authentic hero whose wish is fulfilled.
Gábor Schein, born in 1969 in Budapest, studied German philology and Hungarian Literature in the Eötvös-Lóránd-University, Budapest. He has worked journalistically since 1994 and has acted as editor-in-chief of Irodalomtörténet Magazine since 2003. Since 1995 he has also taught at the Institute for Hungarian Literature at the Eötvös-Lóránd-University in Budapest. He has published poetry collections, like Erinnerung der Wörter (Memory of Words), Cave canem and Glasfisch (Glass Fish) as well as monographs on poetry. His prose works include essays and the novel Das Buch von Mordechai (The Book of Mordechai). Lazarus! is the author’s first German-language publication.
For too long, I believed that there were healing sentences, and now I felt even more strongly, that these, if they existed, were not pronouncable for us, their absence, however, is equivalent to failure (...)
And like earlier, your muteness- this irritated, insulting rejection of language that brought me, the one who always wanted explanations, stories that make the impenetrable bitterness at least understandable, into a situation with no way out- forces me to now speak again, henceforth without any hope of an answer, while I would like to keep your muteness as muteness all the same. Only talking can mute your death. (from: “Lazarus!”)

Autobiographies of an Angel (excerpt from the novel)


The themes of memory and forgetting are not as distinct from the theme of responsibility as we would like them to be. Gábor Schein's beautifully developed and persuasive essay begins with the physical description of a specific part of Budapest, tracing it from its origins as a swamp through its development as an industrial slum and then as a quarter for the wealthy, going on to examine the regular changing of the city's street-names as a series of excisions from memory. Such excisions, he argues, lead to apathy and indifference. Corpses float down the river in 1945 but no one notices any more. The homeless and hungry of today move past us in the street but liberal public opinion uses them more to flatter its own conscience than to do anything. The Sebaldian sense of deep ground constantly opens at our feet but we move on, returning to the moral and psychological equivalent of the swamp out of which the city sprang.
The essay is rendered in its full richness by the translator into English, Ildikó Noémi Nagy.
—George Szirtes