M. P. Shiel - a lost classic, Shiel's purple cloud kills everyone except Adam Jeffers, isolated, and getting more insane as he wanders the barren earth. The question of whether man deserves to survive has never been more poignantly poised 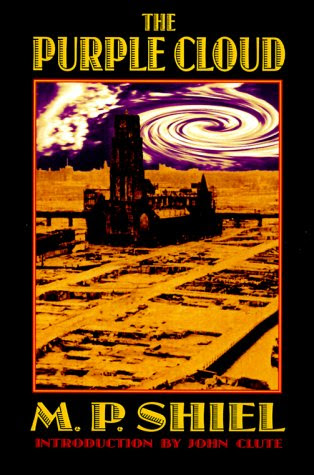 'City-burning has now become a habit with me more enchaining - and infinitely more debased - then ever was opium to the smoker'
The Purple Cloud tells the grandly bleak story of Adam Jeffson: the first man to reach the North Pole and the last man left alive on earth. A sweet-smelling, deadly cloud of poisonous gas has devastated the world, and as Jeffson travels the stricken globe in search of human life, he slowly succumbs to madness, and unleashes fire and destruction on his planet. Dark, desolate and fantastical, the Purple Cloud was a pioneer in the genre of apocalyptic novels, and the first great science fiction work of the twentieth century.
John Sutherland's introduction discusses M. P. Shiel's dissolute life, the originality of his book and its place within the context of 'last man' novels. This edition also includes a chronology, notes and further reading.

"Fantastic, weird, macabre ... It is imaginative, fascinating, convincing, as some dreadful nightmare... A remarkable piece of work, ... head and shoulders above the average tale of fantastic adventure."--The New York Times Book Review

"Students of early science fiction will welcome the University of Nebraska's Press series Bison Frontiers of the Imagination. This imprint has so far brought back into print sixteen texts from the nineteenth and early twentieth centuries, including works by authors ranging from the well-known Jack London to the more obscure Mary E. Bradley Lane and J.D. Beresford. The publishers should certainly be congratulated in bringing The Purple Cloud by M. P. Shiel back to public attention once more. They have chosen to reprint the authors' own final expanded version ... The 1929 version is vintage Shiel; the lush prose complements the epic theme and the grandiose and insane posturings of the pyromaniac protagonist. Shiel was the most eloquent of the immediate successors to H. G. Wells, and even fans of The Last Man by Mary Shelley might admit that Shiel's account of the journeyings of the last man through a dead world is one of the most impressive treatments of this theme."--TLS, December 29, 2000

"A reprint of a lost classic, Shiel's purple cloud kills everyone except Adam Jeffers, isolated, and getting more insane as he wanders the barren earth. The question of whether man deserves to survive has never been more poignantly poised." --Western Mail Saturday Magazine 16 June 2007


HG Wells and MP Shiel were contemporaries, entering and leaving the world within a year of each other, but Wells's reputation as the father of science fiction has continued to grow, while Shiel has disappeared from bookshelves. Both were socialists with an interest in future fiction and scientific romances – and there is evidence that Wells was influenced by Shiel – but Shiel was a West Indies-born author writing in the flamboyant style of the decadent movement. Around the turn of the century he created the first future-history series in science fiction (although, more fairly, the books offer three unconnected alternative futures) with a trilogy that began with The Last Miracle. This was followed by The Lord of the Sea, based on a critique of the private ownership of land, but Shiel's reputation rests mainly on the third part of the sequence, The Purple Cloud. It's an apocalyptic novel that brushes off casual readers with a series of false starts, but settles down to become a truly extraordinary work of fiction.

The book was produced at a time when there was great interest in the unexplored Arctic, and tells the tale of a man named Adam Jeffson who travels there, only to return and find the earth laid waste by a vast purple cyanide cloud. Without the constrictions of a moral society, and crushed by the burden of terrible isolation, Adam wields a power that tips him from eccentricity into megalomania. Dressed as a sultan, he takes explosives from the Woolwich Arsenal and burns London down. Laying waste to cities becomes a habit, a cry of rage for his imprisonment on earth, and he destroys nations before meeting another survivor, a woman in Istanbul who may have the key to his survival.
Shiel wrote 25 novels, but many are bland romances produced more for profit than the passion of language that shows in The Purple Cloud. Shiel's private life was, it seems, as decadent as his early writing. He served 16 months' hard labour in prison for molesting his 12-year-old stepdaughter, and showed a penchant for underage girls throughout his life and his fiction. He also reckoned himself the King of Redonda, a small inhospitable isle in the West Indies – though this may have been concocted as a joke at the expense of critics. His trilogy was published out of sequence, having first been serialised, and The Purple Cloud is now available in a beautiful edition from the specialist publishers Tartarus Press. - Christopher Fowler 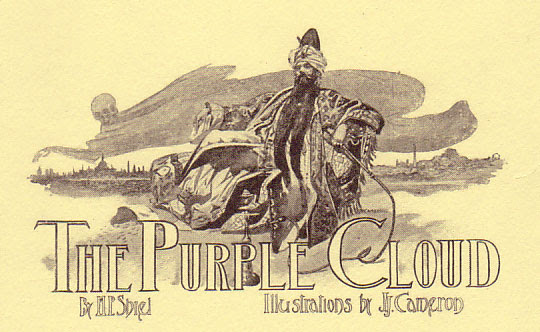