Carola Dibbell - On the other side of Aldous Huxley's brave new world is Carola Dibbell's braver one, all the more unsettling (and maybe even more profound) for being not five hundred years from now but five minutes, in a time at once beyond our control and too immediate to escape

Carola Dibbell, The Only Ones, Two Dollar Radio, 2015.


Inez wanders a post-pandemic world, strangely immune to disease, making her living by volunteering as a test subject. She is hired to provide genetic material to a grief-stricken, affluent mother, who lost all four of her daughters within four short weeks. This experimental genetic work is policed by a hazy network of governmental ethics committees, and threatened by the Knights of Life, religious zealots who raze the rural farms where much of this experimentation is done.
When the mother backs out at the last minute, Inez is left responsible for the product, which in this case is a baby girl, Ani. Inez must protect Ani, who is a scientific breakthrough, keeping her alive, dodging authorities and religious fanatics, and trying to provide Ani with the childhood that Inez never had, which means a stable home and an education.
With a stylish voice influenced by years of music writing, The Only Ones is a time-old story, tender and iconic, about how much we love our children, however they come, as well as a sly commentary on class, politics, and the complexities of reproductive technology.


"On the other side of Aldous Huxley's brave new world is Carola Dibbell's braver one, all the more unsettling (and maybe even more profound) for being not five hundred years from now but five minutes, in a time at once beyond our control and too immediate to escape. Brilliantly conceived, passionately defiant, deeply felt, The Only Ones introduces — in the form of central character Inez Fardo — one of the most memorable and compelling first-person voices in recent American fiction."
—Steve Erickson

"A bracing, tough minded, farsighted novel about bravery and endurance, motherhood and the way life goes on even after the world ends. Every sentence pierces."—Kelly Link

"This is an enthralling journey through a near future, plague filled landscape, presented with such gritty clarity and such a darkly humorous eye for detail that it feels completely real. Inez' deadpan account of her heroic struggle to keep her daughter alive in the ruins of Brooklyn and Queens - a devastated but curiously familiar world, filled with maddening school bureaucracies and public transport that never comes - becomes a fantastic portrait of what it is to raise a child."—Mary Harron

"Dibbell tells this story with intensity and color, through a voice that is as shattered and alive as the world she has created, exploring universal themes of sacrifice, love, and the fragile yet persistent will to survive. At times, The Only Ones feels large, small, sweeping and intimate, scary and full of hope. Dense and vivid, smart and thought-provoking."—Charles Yu


Dibbell’s debut novel chillingly imagines the world in the wake of a global pandemic in the latter part of the 21st century, when much of the population has been wiped out by a potent combination of viruses and bacterial infections that includes tuberculosis, polio, and Ebola. The reader views this apocalyptic abyss through the eyes of Inez Kissena Fardo, a young woman from Queens, N.Y., who has never known a normal existence—she has never even seen a baby. Reproductive ability has been annihilated, and fetuses are made in a lab. Instead of parents there are “clients”; mothers have become “hosts,” and fathers are now “male product.” Inez, who is immune to infection, becomes part of Rauden Sach’s team of baby makers for paying customers. When other methods fail, Rauden resorts to cloning her, and complications ensue. The futuristic trials of motherhood are eerily familiar; Inez spends her days rushing from one low-wage job to the next to pay for her daughter’s schooling, clothes, and the things she needs to keep up with her friends. The book illuminates present-day paranoias, but it is further elevated by Dibbell’s trenchant attention to the corrosive nature of social and economic inequality. - Publishers Weekly


For the twenty-odd years I wrote rock criticism, I was always working on one piece of fiction or another, and there was leakage both ways. In the early years punk was my big interest and it sometimes got into my fiction as odd rhythms, a taste for DIY. I also learned things about narrative flow from hip-hop. I wouldn't love naturalist novelists like Theodore Dreiser, Willa Cather and Christina Stead without their grip on facts, but what drew me to them was not unlike what draws me to Malian music, with its endless repetitions and vocal plateaus. I'm much less interested in stories about the world of rock and pop than prose or tone that embodies it--The Brief Wondrous Life of Oscar Wao, with its nerd trash and subtitles. Junot Diaz wrote that book like a rock critic! That's a compliment!
All the tone mixing, vulgarity, earnestness, and hair-splitting that rock critics could get paid for back then helped me reconcile literary ambition with the awkward need to be myself. Taking pop music seriously led naturally to taking genre fiction seriously--Le Carré's density, Hammett's harsh clarity, the everyday rhythms of police procedurals, the odd mental spaces built by SF writers like Samuel Delany and Ursula LeGuin. And, though it took a while, over the past fifteen years, my own fiction finally turned speculative.
I started posting fiction here when it began to look like this website might be the only public life most of it would have--a novella, [Real Piece of Work]; a story, "Surviving Death"; and "Healing Grace," which had appeared in The New Yorker. (A long story, "A Misunderstanding," which The Paris Review published years ago, is incomplete here.) Then Fence excerpted the novella, I did some readings, and not long after finished The Only Ones, a near-future novel which is now being shopped by my energetic and simpatico young agent.
"Dear Ann and Evelyn" is an old statement of purpose about being a woman in the guyville of early rock criticism. "Inside Was Us: Women in American Punk," was included in Trouble Girls: The Rolling Stone Book of Women in Rock. The rest of the music writing here appeared mainly in The Village Voice, as did the book reviews I wrote for VLS in the M. Mark years. "Thinking About the Inconceivable" was a personal piece about infertility in the guise of a book review, and many of its ideas appear in new guise in The Only Ones.
I live in an old East Village apartment with Robert Christgau, my husband since 1974, and our daughter, Nina Dibbell Christgau. - robertchristgau.com/u/cd/index.php

at March 02, 2015
Email ThisBlogThis!Share to TwitterShare to FacebookShare to Pinterest
Labels: Carola Dibbell

João Reis - One of the funniest novels you are likely to read,. It is a perfect example of the negative capability described by Keats that would absolutely kill the police procedural from which it spins its web: it accepts the existence of “uncertainties, mysteries, doubts, without any irritable reaching after fact and reason.

João Reis, Bedraggling Grandma with Russian Snow ,  Trans. by João  Reis.  Corona Samizdat, 2021  One of the funniest novels you are li... 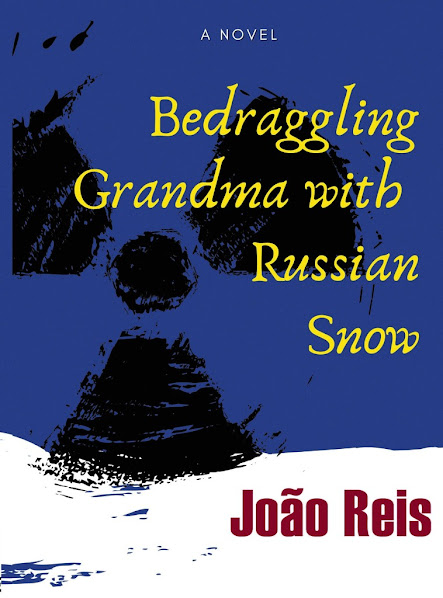