Terayama Shūji is a realist speaking through the medium of fantasy. To read these stories you'll maybe finding yourself putting the external world on hold for a while, entering Terayama's world is like finding yourself in a slightly phantasmic version of Lewis Carroll's 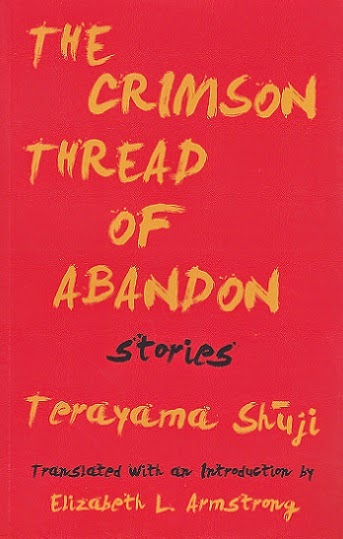 
The crimson thread noted in the title of this book aptly describes the nature of Teriyama’s stories and the interstitial webbing joining them together thematically by the metaphorical twisting together of unrequited love, abandonment, irremediable separation, and disappointment. Told in the manner of fantasy and magic realism, the stories are populated with characters who face the vagaries of fortune, happiness always just out of their reach.
Terayama is a realist speaking through the medium of fantasy. The stories are “tales for adults,” and indeed they are written in such a way as to mimic and sometimes parody classic fairy tale style. Yet, these tales are far from traditional in content; rather, they turn our conventional thinking and expectations upside down.
This topsy-turvy world of Terayama is unsettling and disconcerting at times, but his world is, without a doubt, thought provoking.


Each borrows and mocks the conventions of a classic fairy tale, but reeks of hopelessness and misfortune, leaving his characters no happy endings." - Madeline Barbush


It’s a wonder “The Crimson Thread of Abandon” was never translated into English before. Shuji Terayama (1935-83) was a provocative artist and outlaw author, and his 20 stories fall nothing short of this reputation. Each borrows and mocks the conventions of a classic fairy tale, but reeks of hopelessness and misfortune, leaving his characters no happy endings.
Titles such as “Alice in Shadowland” and “Hide-and-Not-Go- Seek” resonate within as an eerie echo, a sad dream. Instead of gifting these stories with a shiny bow, Terayama ties his compilation with a crimson thread and provokes us to rip and tear until the end. - Madeline Barbush


For those familiar with Terayama and his poetry, films, (most famously perhaps, Emperor of Tomato Ketchup and Pastoral: Death in the Country), and his plays, this book will be a welcome addition, in some ways it could be said to be able to appreciate the book without considering it in light with the rest of Terayama's output and life could be a difficult thing to do, but whilst reading these stories it's hard not to hear echoes of the music of Julius Arnest Seaer playing somewhere in their backgrounds. To read these stories you'll maybe finding yourself putting the external world on hold for a while, entering Terayama's world is like finding yourself in a slightly phantasmic version of Lewis Carroll's, spread across them some characters reappear, Mizue, who could be described perhaps as Terayama's Alice, and also there's Smokey the cat, although references aside, in Terayama there's a feeling that eventually everything becomes subverted. Throughout these stories characters appear that feature in his films, sailors, boxers, travelling troupes, another repeating motif is the game of hide and seek, in one, Hide-and-Not-Go-Seek, the narrator plays the game and taking a dislike to one boy sees him hide down a drain, seeing a lorry reversing which is carrying a load of lumber he instructs the driver to dump it on top of the man hole cover, the game finishes without the boy in the drain re-appearing, unnervingly, much to the indifference to the narrator. Years later he returns to his hometown and passing the drain on a nostalgic stroll he peeks inside half expecting to find the boy's bones, entering it he struggles to see but looking up the boy, un-aged, appears and closes the cover down on him and the sound of heavy objects being placed on the cover is heard. Reading these stories you get the slight feeling that you're being assaulted by the breadth of Terayama's flights of inexhaustible imagination, and they are to be wondered at.
Another re-occurring element is that of the cut out, characters come into existence by having their names cut from other books, in another story words are brought to life by being cut out of the page, a conundrum arises with the word love, how will it manifest itself when it's cut out and appears in the physical world?, Terayama offers possible answers to the reader in the style of a number of multiple choice options, we decide, this switch in offering the reader a perspective on the creation process is offered in other stories, how would we write it, he offers us the pen?. But if you were to pick up this book without any prior knowledge of Terayama or the rest of his oeuvre you'd be hard pressed not to be caught in his world, the stories have a slightly quick fire-ness to them, characters can be introduced in the time it takes to finish the end of a sentence, their directions take turns into different trajectories in equal amounts of space. In Flame a town suffers the fate that all the fires go out, to the extent that a neighbouring volcano sinks into smoking dormancy, one of the characters ponders as to whether the town actually had a spark to begin with?, a plot develops that a flame will be kidnapped from a neighbouring town, but the plot is threatened by those committing a subterfuge, which includes a flock of dive bombing birds, but within the story lies another added layer, that of the theme of the purity of the flame of love.
Throughout these stories it feels that conventional storytelling is being dispensed with, although many of the stories retain preoccupations with the nature of fate, of course it's usually unfair and cruel, they retain though the feeling of being fables, albeit being distortedly viewed through a bell jar. Eraser, is another story where an everyday object becomes imbued with magical powers that provokes a double take at the commonplace, coming across an eraser that has the ability to erase physical objects, Johnny the Sailor jealously uses it to erase all the men in the life of the woman he falls in love with, but to the story Terayama adds a twist of fate that adds a further resonance to the tale. In The Elusive Milena, a camera is discovered to be able to take photographs 10 years into the future, and for all those who don't appear in their photograph it points in only one direction concerning their fates. A last note on another motif that appears in a number of these stories, that of characters multiplying, returning home to find themselves already there, being spotted out walking the streets when they haven't left their rooms, this gets it's deepest exploration in Remy's Quantum Realities, in which Remy multiples many times over, Terayama works in a reference to Euclid's axioms and leaves us the story with some homework to do at the end, how many Remys appeared in this story?. A beguiling collection, the book is published by Merwin Asia, an independent publisher, and is translated by Elizabeth L. Armstrong, who also provides an introduction. - http://nihondistractions.blogspot.com/2014/09/the-crimson-thread-of-abandon-stories.html


The Crimson Thread of Abandon collects twenty of Terayama Shūji's odd melancholy and surreal stories.
The opening story, 'Ribbon of the Sea', is a good introductory one: like many of the others, it is divided into several short sections, and moves from one character and situation to another. It is a yellow ribbon that is the unifying thread of the story and an entirely surreal fantasy sequence that starts things off: seven-year-old Mizue, annoyed by an illustration of an old woman in her picture book cuts the image out -- and it promptly comes to life (a trick repeated elsewhere in the collection, too). As thanks for liberating her, the old woman offers some free advice: "Beware the yellow ribbon, for it will bring nothing but misfortune." The story jumps ahead to Mizue's tenth birthday, and she gets a present wrapped in a yellow ribbon -- and it all goes downhill from there, as one fate after another is affected by: "the yellow ribbon of misfortune".
In a matter-of-fact tone Terayama offers these fantastical near-fairy-tales, with often wildly creative premises. People suddenly are transformed into birds; an eraser allows its user to literally erase anything from existence; an Alice-figure cuts out her shadow -- and then finds herself with two; a town suddenly finds itself entirely without fire, as even matches won't light ay more; there's a doctor who can inject any sort of memories into patients. Almost always, Terayama uses such elements just as a starting-point, jumping off into often completely unexpected directions. There's nothing obvious about where Terayama takes readers, and what resolutions there are rarely count as happy endings -- and yet the stories have a fundamental sort of plausibility, as real life, too, rarely works out as neatly as fairy tales or indeed most fiction would have it.
There are variations on the game of hide-and-seek ("a lonesome game", as Terayama observes on more than one occasion) -- including a nicely turned one in 'Hide-and-not-go-seek', an almost conventionally told fairy tale, but yet again with a (nicely pulled off) dark ending.
In 'Gotta Dance' a character finds she can't entirely control her body any longer. Reaching for the children's book she wants to read, "her unruly hand selected de Sade's book", Justine, instead; wanting a glass of grapefruit juice, her hand picks up champagne instead. She finds she: "had become imprisoned in her own body" -- and resigns herself to it:
Mizue will probably discover "herself" when she grows up, but for the time being she surrenders. She decided to let her hands, feet, and mouth determine her behavior.
Terayama's distinctive, unusual stories are adult tales, but with a childish free spirit to them. The mix of fairy-tale elements -- often very basic, simple premises or features -- and the unusual twists Terayama subjects these and his characters to make for enjoyably loopy rides. Extremely compact, often quickly jumping from one idea and set of circumstances to the next, the stories make for a heady read.
The collection is a neat little discovery. - M.A.Orthofer
at March 09, 2015
Email ThisBlogThis!Share to TwitterShare to FacebookShare to Pinterest
Labels: Terayama Shūji