Tadeusz Borowski - In spare, brutal prose he describes a world where where the will to survive overrides compassion and prisoners eat, work and sleep a few yards from where others are murdered; where the difference between human beings is reduced to a second bowl of soup 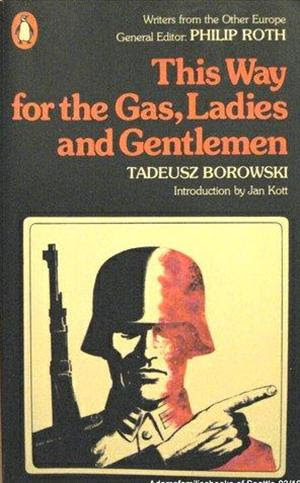 Tadeusz Borowski, This Way for the Gas, Ladies and Gentlemen, Penguin, 1976.
excerpt

Tadeusz Borowski’s concentration camp stories were based on his own experiences surviving Auschwitz and Dachau. In spare, brutal prose he describes a world where where the will to survive overrides compassion and prisoners eat, work and sleep a few yards from where others are murdered; where the difference between human beings is reduced to a second bowl of soup, an extra blanket or the luxury of a pair of shoes with thick soles; and where the line between normality and abnormality vanishes. Published in Poland after the Second World War, these stories constitute a masterwork of world literature.

'This Way for the Gas, Ladies and Gentleman" is the title piece of a short story collection by the late Polish Holocaust survivor Tadeusz Borowski. Borowski was not a Jew, but a poet who suffered from clinical depression. This was sufficient reason for him to be detained at Auschwitz and Dachau as a political prisoner. Because of his non-Jewish background, however, his views toward both his captors and his fellow prisoners are somewhat different than those normally reported by concentration camp survivors.
It's not that he views his incarceration in any more sanguine terms than the Jews with whom he was imprisoned. It's simply that Borowski does not seem able to separate the prisoners and the captors into villains and victims. He views the entire situation as evil, not evil perpetrated upon the innocent by the guilty, but a situation in which the Jews buy into their own fate because they are too foolish to suspect the totality of the corruption of human nature.
This is a view of the Holocaust which is even darker and bleaker than the our usual interpretation of it. At least in the Anne Frank view of those terrible years, we are able to see the survivors as noble and courageous people who, despite the loss of seven million Annes, came out of their experience determined to make sure that such a terrible thing never happens again..
Borowski, on the other hand, sees precious little noblity or courage anywhere. In the title story, the narrator, Tadek, is a member of a force responsible for going through the Jewish victims' personal possessions in search of any valuables they can salvage for the coffers of the Third Reich. Tadek knows that most if not all these people are under a death sentence, and yet he does not tell them this; although he feels deep shame about his job, he justifies it on the grounds that he believes the Jews to be responsible for their own imprisonment.
He even feels that it is these same miserable Jews who have condemned him to feeling badly about himself. He says, "...I am furious, simply furious with these people -- furious because I must be here because of them. I feel no pity. I am not sorry they're going to the gas chamber. Damn them all! I could throw myself at them, beat them with my fists."
Tadek's skewed argument is that even the concentration camp prisoners who worked for the Nazis suffered, and the fact that they were allowed to survive but forced to work for their captors is even more dehumanizing than being allowed to die. Captive workers were forced to carry dead Jews to the crematorium, as well as witness a myriad of other sickening and despicable acts. Borowski argues that whatever the captive laborers did in the camps they had to do, or else their insubordination would have signed their own death warrants. Through Tadek, he argues that he is not guilty, but he is nonetheless overcome with shame.
Clearly Borowski's feelings toward his Holocaust experience are very conflicted, as evidenced in the wide range of emotions exhibited in his story. At the beginning of the story, he is anxious for the next wave of affluent Jews to come in so he will be able to loot their belongings. When they actually come, however, he has to watch, and to some degree participate in, the barbaric treatment shown these people.
He writes, "I go back inside the train; I carry out dead infants; I unload luggage. I touch corpses, but I cannot overcome the mounting, uncontrollable terror. I try to escape from the corpses, but they are everywhere: lined up on the gravel, on the cement edge of the ramp, inside the cattle cars. Babies, hideous naked women, men twisted by convulsions. I run off as far as I can go, but immediately a whip slashes across my back. Out of the corner of my eye I see an S.S. man, swearing profusely. I stagger forward and run, lose myself in the Canada group. Now, at last, I can once more rest against the stack of rails."
Tadek is unquestionably sickened by his situation, but his conflicted feelings coalesce into a kind of extreme existentialism. He feels there is no point to anything, literally no point at all, and this lack of meaning in his life became unendurable; it is scarcely surprising that six years after the end of the war, Tadeusz Borowski committed suicide.
Yet saddest of all is the fact Tadek's suggestion that his point of view was not an uncommon one among the non-Jewish survivors of the concentration camps. Tadek's reactions to the Jews range from indifference to intolerance to hostility. Under the extreme pressure of existence in the concentration camp, these feelings harden into a kind of numbness, because this is the only way he can get from one day to the next. As his friend Henri says "[It] exhausts you, you rebel -- and the easiest way to relieve your hate is to turn against someone weaker. Why, I'd even call it healthy." Understandable, possibly -- but healthy, never. - Karen Bernardo

Tadeusz Borowski was born in Soviet Ukraine in 1922, in a Polish community that would, under Stalin’s rule, become the first national minority targeted during the Great Terror, ultimately resulting in the death of 600-700 thousand Poles. When Borowski was four years old, his father was arrested and sent to the Gulag; four years later, his mother was arrested and sent to Siberia. Borowski and his brother were placed in an orphanage until 1932 when the Polish Red Cross succeeded in getting them resettled in Poland. His parents were eventually released and repatriated to Poland where, in poor health and in poverty, they strived to establish a family life again.
History did not give them much time. Tadeusz was only 17 when Germany invaded Poland. He continued his studies in underground schools and began writing poetry published in the underground press. At 21, he was arrested by the Gestapo, stepping into a trap when looking for his fiancée, Maria, who had just been arrested as well, along with a friend, another student.
After the war, he returned to Poland and began writing again, but this time in prose because his experiences made poetry impossible. His stories about Auschwitz were published under the title, Pożegnanie z Marią (A Farewell to Maria), later published in English under the title, This Way for the Gas, Ladies and Gentlemen.
Borowski joined the Communist party in 1948, thinking that this could be the only hope for humanity. A year later, his friend, the same one who had been arrested with him by the Gestapo, was imprisoned and tortured by the Communists. Borowski tried, but failed, to help him. In 1951, he committed suicide.
Borowski’s book is agonizing to read. He spares the reader nothing, nor, for that matter, does he spare himself or anyone else at Auschwitz. It is a record of searing, terrifying brutality, made all the more so by the helplessness of the prisoners enclosed in a sealed environment.
For many people, This Way to the Gas, Ladies and Gentlemen… is considered an essential record of the horrors of Auschwitz; but for others, it is too unsettling. It is not “lyrical” enough, not sympathetic enough. He offers us no theories, and not a single redeeming possibility. Unembellished, because, as he wrote, “there can be no beauty if it is paid for by human injustice, nor truth that passes over injustice, nor moral virtue that condones it.” Surely there was no need to ask for sympathy?
Perhaps that is why this book is less well known than others that followed. We do not like what we read; it is very disturbing. Borowski wrote this book when the memories were fresh; he was still a young man and still desperately trying to find something to believe in. But he lived with his nightmares, and he wrote them down. Nothing ever relieved his pain.
Borowski gave up poetry. What about other art forms? Can there be music? A German professor of music, an admirer of the difficult modern music composed by Poles after the war explained to me that this harsh music was historically imperative: Poles could not, in those years, compose a pretty melody. After a few notes, the music would collapse with an angry, agonizing crash.
Can there be art? This Way…, the book under discussion, was inspired by a design competition for the cover of a new edition of Borowski’s book. The winning cover was designed by Anna Zyśko of Poland. In all, 241 entries from 44 countries were received and evaluated by a jury comprising John Guzlowski, J. Marek Haltof, Alicia Nitecki, Jae Jennifer Rossman and Marco Sonzogni. The images included in the book were selected from the competition entries as well as from designers specifically commissioned for this book. Some of the cover art is quite conventional, fairly straightforward representations of the book title. Some, however, show an extraordinary depth, blending horror, pain, despair, death and some, even a glimpse of beauty beyond the camp. - Irene Tomaszewski