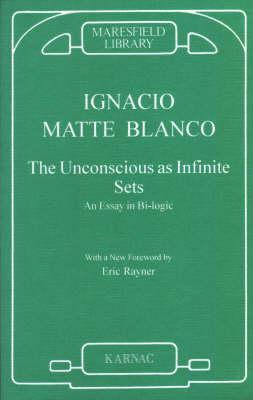 Ignacio Matte Blanco, The Unconscious as Infinite Sets: An Essay in Bi-logic, Routledge, 1981.
read it at google Books


A systematic effort to rethink Freud's theory of the unconscious, aiming to separate out the different forms of unconsciousness. The logico-mathematical treatment of the subject is made easy because every concept used is simple and simply explained from first principles. Each renewed explanation of the facts brings the emergence of new knowledge from old material of truly great importance to the clinician and the theorist alike. A highly original book that ought to be read by everyone interested in psychiatry or in Freudian psychology.


'Perhaps the first systematic effort to rethink Freud's theory of the unconscious, aiming to separate the different forms of unconsciousness (many of which Freud lumped into the concept of the "primary process") has been undertaken by Ignacio Matte Blanco in The Unconscious as Infinite Sets. Matte Blanco's work is of truly profound significance.'- Christopher Bollas


'Those [who have not read] The Unconscious as Infinite Sets are in for a very great treat.'- James S. Grotstein, M.D.


'A large volume probing the deeper aspects of psychology. Its charts of terra incognita are as good as any we yet have available.'- Karl Pribram, Journal of Nervous and Mental Diseases


'The logical-mathematical treatment of the subject is made easy because every logical-mathematical concept used is simply explained from first principles. Each renewed explanation of the facts brings the emergence of new knowledge from old material of truly great importance to the clinician and the theorist alike.'- Henri Rey, International Journal of Psychoanalysis


'This is a highly original book. The author, a professor of psychiatry who is a practicing psycho-analyst, feels that psycho-analysis needs a new theoretical frame of reference, without which it is proving impossible to see new facts in clinical reality. This book ought to be read by everyone interested in psychiatry or Freudian psychology.'- British Book News

Ignacio Matte-Blanco has made one of the most original contributions to psychoanalysis since Freud.
In this book, which includes an introductory chapter to his work by Eric Rayner and David Tuckett, he develops his conceptualization of the Freudian unconscious in terms of logic and mathematics, giving many clinical examples.


Mathematical thought in the light of Matte Blanco's work (pdf) 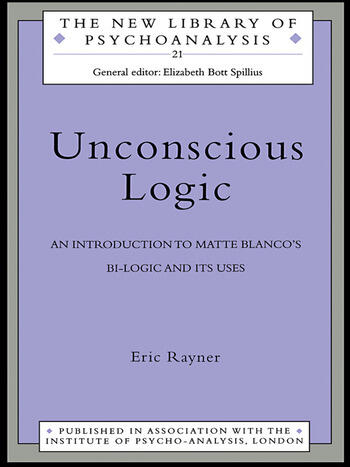 
While the theories of Matte Blanco about the structure of the unconscious and the way in which it operates are generally recognised to be the most original since those of Freud, for many people the ways in which his ideas are expressed, including the use of terminology from mathematics and logic, make them difficult of access.Eric Rayner has written the first clear introduction to Matte Blanco's key concepts for psychotherapists and psychoanalysts and all those concerned with moving psychoanalytic thinking forward. He sets out the central ideas in a way which is easy to understand and then shows, with examples, how they relate to clinical practice. He also describes how the ideas are related to those of people in other disciplines - mathematics, logic, psychology (specifically Piaget), and anthropology, among others.
Drawing on the work of a group of people who have been inspired by Matte Blanco's thinking to extend their own ideas and test them out in the consulting room, this book reveals the significance of Matte Blanco's thought for future research.

"Now at last we have a good introduction to Matte Blanco's ideas written by Eric Rayner which makes this very different psychoanalytic perspective relatively easy to understand. He explains new concepts step by step but, more importantly, he gives many clinical illustrations of logical ideas. But firstly, who is Matte Blanco?" - British Journal of Psychotherapy
"... let me say that Unconscious Logic is a very good introduction to Matte Blanco's bi-logic. The psychotherapist nervous of logic may find that they understand much more logic than they thought. But more than this they will find in bi-logic a method of connecting diverse discilplines as well as a new approach to clinical material." - British Journal of Psychotherapy


Ignacio Matte Blanco was a Chilean psychiatrist and psychoanalyst who developed a rule-based structure for the unconscious which allows us to make sense of the non-logical aspects of thought. Born in Santiago, Chile, Matte Blanco was educated in Chile, and before leaving Chile for London, was in analysis with Fernando Allende Navarro, Latin America's first qualified psychoanalyst. He trained [in psychiatry] at the Maudsley Hospital and in psychoanalysis at the London Institute, where he was in supervision with Anna Freud and James Strachey, becoming a member of the British Society in 1938. He subsequently worked in the United States, Chile, and Italy, where his family now lives. He died in Rome at the age of 86.
Labels: Ignacio Matte Blanco