Benjamín Labatut - Using extraordinary, epoch-defining moments from the history of science, Labatut plunges us into exhilarating territory between fact and fiction, progress and destruction, genius and madness 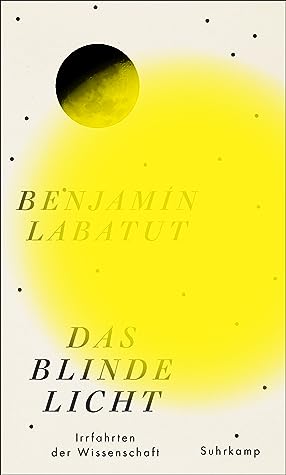 Benjamin Labatut, When We Cease to

Albert Einstein opens a letter sent to him from the Eastern Front of World War I. Inside, he finds the first exact solution to the equations of general relativity, unaware that it contains a monster that could destroy his life`s work.

The great mathematician Alexander Grothendieck tunnels so deeply into abstraction that he tries to cut all ties with the world, terrified of the horror his discoveries might cause.

Erwin Schroedinger and Werner Heisenberg battle over the soul of physics after creating two equivalent yet opposed versions of quantum mechanics. Their fight will tear the very fabric of reality, revealing a world stranger than they could have ever imagined.

Using extraordinary, epoch-defining moments from the history of science, Benjamin Labatut plunges us into exhilarating territory between fact and fiction, progress and destruction, genius and madness.

God does not play dice with the world, Albert Einstein famously declared, to which Benjamín Labatut would surely retort: perhaps not – but the devil does. In fact, Einstein himself had a lifelong niggle of doubt about mathematics, the discipline that we suppose keeps the Lord away from the gaming tables. How is it, he wondered, that an intellectual tool invented by humans can comprehend, account for and even manipulate so much of objective reality? That the physical world should be amenable to something we made up seemed to him suspect.

Is it perhaps that we register only as much of the world as our figurings can encompass? Wittgenstein had already conjectured that the limits of our language are the limits of our knowledge; could this be the case also, but more radically, with mathematics and the branches of science on which it is based? We see only that which we are capable of seeing: how much is beyond us?

About quantum mechanics, the development of which was as bold and momentous a feat as the formulation of the theory of general relativity, Einstein had more than a doubt – he loathed it, refusing to accept a version of physics that replaced Newtonian certitude with a haze of probabilities. He spent the last 30 years of his life attempting to bring about a synthesis that would transcend quantum theory, and failed. Outlandish hypotheses put forward in the late 1920s by Werner Heisenberg and Niels Bohr, the originators of the Copenhagen Interpretation of how atoms work, today underpin the science that guides the exploration of the farthest reaches of space and the workings of the mobile phone in your pocket. - John Banville

Benjamín Labatut is a Chilean author born in Rotterdam, The Netherlands, in 1980. He spent his childhood in The Hague, Buenos Aires and Lima, before settling in Chile, where he currently lives and works. His first book of short stories, Antarctica starts here, won the 2009 Caza de Letras Prize in Mexico, and the Santiago Municipal Prize, in Chile. His second book, After the Light, consists of a series of scientific, philosophical and historical notes on the void, written after a deep personal crisis. His third book When We Cease to Understand the World, will be published this September in the UK, by Pushkin Press, translated by Adrian Nathan West.

at October 16, 2020
Email ThisBlogThis!Share to TwitterShare to FacebookShare to Pinterest

Allegorithms - Oscillating between the algorithmic & the representational, the human agent navigates its environmental niche in a way which is conducive to its further psychological, social, & biological existence