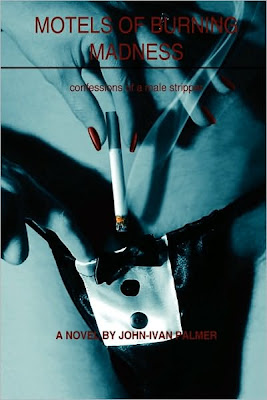 "Literary renegade John-Ivan Palmer worked through several male dance agencies to research this satire of strange romance. Huey Dubois, the Hollywood gigolo, can’t say no to a deep obsession for older women. Party girls and jealous husbands clash with hairy male strippers, cross-dressers, and a rich heiress, leading to a final showdown where Huey bares more than just his body. The novel transcends its cast of bizarre characters caught up in their gender circus and becomes a deft dissection of desire itself."

"Throughout history authors have followed careers much different from the nature of their written work. Christopher Marlowe was a spy. Daniel Defoe ran a brickyard. William Empson was a mathematician. Eliot was a banker. Kafka worked for an insurance company. Some, like Genet and Villon, were criminals. John-Ivan Palmer is the only known literary author who is a stage hypnotist. "I am a writer playing the role of hypnotist, not the reverse."
His wide travels and unusual experiences on all levels of society are reflected in the diversity of his highly disciplined work, described variously as authentic, daring and bizarre. His journalism has appeared in large circulation newspapers like the San Francisco Chronicle, Minneapolis Star and Milwaukee Journal. His Pushcart Prize winning poetry and fiction have appeared in Wisconsin Review, New Oregon Review, Other Voices, Broken Streets, and Nth Position. For 13 years he wrote for Your Flesh Quarterly, the premier journal of underground and shock culture. His many interviews, articles and reviews of the latest avant-garde artists and their work were widely read internationally and were mentioned in Newsweek magazine. He interviewed controversial and history-making people like anthropologist Napoleon Chagnon, film-maker Richard Kern, comic book artist Frank Miller, dissident cartoonist Mirko Ilic, manga artist Suehiro Maruo, crime journalist Sondra London and feminist radicals Karen Finley, Annie Sprinkle and Brenda Tattlebaum among many others.
His recent work has featured a literary approach to delusional conscious states such as suggestibility, influence, fascination and control, as in his Motels of Burning Madness. An even greater focus on this theme is the forthcoming Wild Ruins of the Waking Sleep, a collection of linked personal essays which rip the mask off stage hypnotism as it has never been done before."
"Very strong stuff. It got straight to me. Male stripper meets mud-wrestler, what a riot. I can't think of another book of post-modern realism that ever made me laugh so much. The ending took me completely by surprise.” — Richard Kern

“John-Ivan Palmer’s effortless writing, narrative flair and rollicking satire are a rare treat. Whether he’s writing fiction or seriously informed non-fiction and reportage, he is in complete control.” —Val Stevenson

“This book knocked me out. It’s the Odyssey, but also the Satyricon. Through it all Palmer maintains an unaffected compassion for everyone. He has spelunked the dank caverns of the human head and come up clean.” —Tom Bradley