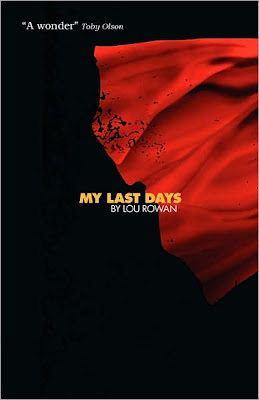 "In this satirical novel, a well-known superhero [Superman] takes on the corruptions of many current public figures in politics, business, and the arts."

“MY LAST DAYS takes us deep inside the American myth of Superman and Clark Kent where no prior version of our naturalized heroic savior’s ineradicable story has dared to go. Be prepared for a wild ride on the back of the man of steel’s poignant confessional autobiography into a satirical maelstrom of hilarity and moral outrage.” — George Economou 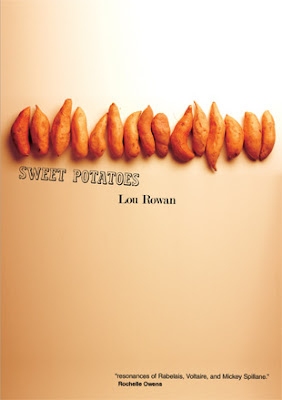 "Lou Rowan's exuberant and richly varied book presents a series of dramatic monologues whose personal and imaginary components are fused in the blaze of the author's enthusiasm. The feeling that he is doing exactly what he wants to do produces consistently lively results, no matter how downbeat the struggles described - with parents, lovers, wives good and bad, business problems, and of course the inescapable self. In the final story, a counterpoint of these voices raises the narration to a level of intensity both harrowing and irresistible..." — Harry Mathews

"The stories in Lou Rowan's collection Sweet Potatoes are brilliantly rendered in a mesh of grim and exuberantly funny shifts of highly original tale-telling. The variety of characters are utterly real and fascinatingly complex. Their daily actions and experiences offer a mesmerizing picture of much in society that is false and outrageous and yet all too forgiveably human. Rowan tunes up his one of a kind narrative voice with resonances of Rabelais, Voltaire, and Mickey Spillane." — Rochelle Owens

"These very short stories are a blend of maybe memoir, crazed case history, and raunchy comic fiction spun by a deadpan narrator with a gift for dazzling transitions." — David Antin

"With incisive wit and a remarkable eye for the human condition, Lou Rowan weaves together a collection of short stories that will arouse laughter, nostalgia, and an occasional dose of pity. In Sweet Potatoes, the author lays his characters bare, digging into their psyches, presenting their foibles, and in doing so, holding up a mirror that dares the reader to recognize himself.
Through a series of cleverly sketched vignettes told in first person and third, Rowan takes us from the sexual awakening of pubescent boys to the angst of middle-aged men. Their stories resonate because they could be every man. Precisely this effect is achieved by Rowan’s habit of naming his characters a one-letter initial in the early stories of the collection. “L intended to marry his college sweetheart and that didn’t work, but after he dropped her she produced their son, who failed to interest him. He became president of his family’s company, which went south, his career with it, and his relatives, alleging improprieties, pursued him like balance sheet furies. ” In these first two lines of the story, L, Rowan brilliantly slices up and serves his character for our amusement and pleasure. He invites us to join him in on the joke, for surely we’ve known an L, an M or suffered as a G.
For all the humor that runs through the collection, there’s a thread of tragedy that offers a counterpoint—a note of dissonance, if you will, that pierces. Nowhere is this more evident than in 'Jack’s Ladder'. The story begins with an unholy start as the protagonist Jack has his foul mood exacerbated by an even fouler day that has him walking out on his wife the next morning. It feels real. Passionate. And then Rowan turns the tables. We enter what should be the dream world to find ourselves in reality—a reality in which Jack and his wife painfully find their way back to one another after the death of their son. Poignant, heartwarming, because the seeds of hope are there for a new beginning. It’s a story that stayed with me long after I closed the covers of the book.
In the last story, 'The Accounting: A Mystery', Rowan departs from the themes that dominate the earlier shorts. Here, the author takes the reader on a madcap dash from NY to Chicago to the monasteries of Tibet. Told in multiple viewpoints, the characters form a complex knot of relationships that tangle with the Mafia, revenge, lovers spurned and lovers killed. Like the pieces of a puzzle, the twists and turns are laid out for the reader in seemingly random order to be plucked up and assembled in some fashion that makes sense. The characters are quirky and compelling, with the most likable ones being a recovering drug addict and his newfound love, the geek friend from his student days. Overall, this short drama is absorbing, amusing, and masterfully told.
Sweet Potatoes offers a rich variety of entertainment at a number of levels. Despite the brevity of the stories, Rowan’s use of description, introspection and dialog brings his characters to life in a way that’s hard to forget. Perhaps the author sums it up best when he says, “I love plot, character, surprise, love them.” - Patrizia Hayashi
Labels: Dominic Aulison James Tierney Lou Rowan Patrizia Hayashi