CB Smith - If life at home is so frightening you decide that disappearing would be better: you may have found a hilariously inventive way to survive 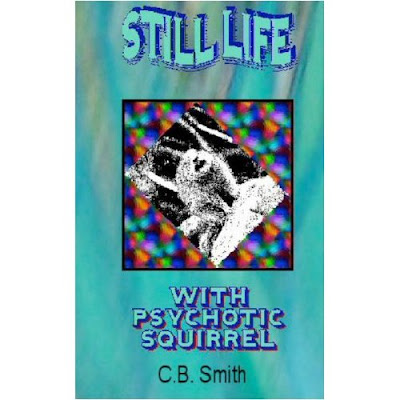 
"A landmark underground novel in the vein of Tom Robbins and William S Burroughs."

"Although at first glance this slim volume, Still Life With Psychotic Squirrel, appears to be a nothing read, it should be lingered over and reread to uncover the full depth of its nauseating beauty and certifiable insight. Combining memoir with artistic and philosophical musings, CB Smith begins by confessing his incomprehensible obsession with the 19th-century Spanish still life that serves as the title of this book.
As he analyzes the items depicted in the painting, he skillfully introduces his thoughts on our intimate relationships to objects and subsequently explains how they are often tyrannically bound to the people, places, and twisted relationships of an individual lifetime. Further defined by imperfections attained from use, each object from a dilapidated Formica table to a chipped green and maroon carnival platter forms a springboard for reflection. Smith intersperses personal reminiscences of his terrifying childhood throughout, but he always returns to the subject of still-life painting and its silent eloquence. Smith's observations on balance, grief, beauty, space, love, and time are imparted with wisdom and poetic grace.
This little book is a gem." - Wanda Bunkowski

"First of all, I was expecting a book about a psychotic squirrel who devours human flesh, and paints pears and apples in his spare time. But that's just me.
Second, I wasn't expecting my mind to get sucked into this story. My preference, when it comes to reading, is minimalism, and this is anything but. However, Smith's semi-experimental prose held my interest, with an engaging rhythm and style.
So what's this book about exactly? One man's life, and that's a complex thing. So don't expect a straightforward story arc, because reality doesn't usually work that way. In fact, forget the arc altogether.
To me, this is a book about blame and shame cycles; how emotionally-hostile and abusive environments are passed on from generation to generation; how a person can react to past traumas instead of negotiating boundaries or maintaining real intimacy in later life.
And, of course, this is a book about art. Art and trauma often walk hand in hand, and Still Life explores one such relationship.
Also, it's important to note that this book is funny sometimes. Darkly funny.
"Mom, can I be done?
"I don't think so... you haven't finished all of your food.
"But Mom, I'm full.
"There are starving children in the world... finish your meal."
Check it out." - Jeremy C. Shipp

"Here's one of those novels that almost makes me wish a next terrorist attack would strike publishers' row. There's not a chance in hell this novel would ever make it past the first committee meeting, and that's exactly the first hope it offers the reader. It's something of a fictional diary and journal, but not, thank Christ, another memoir. It's experimental, yet accessibly so. Short and less short entries record the narrator's perceptions.
Those perceptions seem influenced by the writings of Lautréamont and other poets and stylists of his ilk. Some notices mention William S. Burroughs, but I see something else happening here, less a writing towards silence (Burroughs' great hope being "rubbing out the word") than a splintering of narrative and time. And there is a sense of scatter, the scatter of life, the scattering array of it, and the way our lives scatter away from our intentions.
Chapter titles provide hints of Smith's range: "Reflections on Kitchenware, et al.; "The Ghosts of Christmas Present"; and my favorite, "Caring," which consists of the words "I don't care" repeated for pages, followed by "I care too much." And I cannot neglect The Psychotic Squirrel, the narrator's nemesis, though one he reluctantly respects: And aren't they cute these seemingly angelic kin of the rodent whose sharp teeth and finally honed instincts can turn them into a lethal attacker."
Here's the narrator's wonderful early experience with dentists: "It seemed strange to me that all those dentists were in one room like that. When I watched dentists on TV, they always had rooms all to themselves. I asked mom about it. Well honey, she said, because that building you go to is a school. A dental school. That's where they learn how to be dentists." Thanks, ma! Memories of barbershop schools reverberate underneath my current haircut that is only an improvement because it's falling out.
Still Life with Psychotic Squirrel is a book of wanderings. At times, it reminds me of Jim Thompson's writing, and that in turn means it reminds me of the Rodney Dangerfield line, "I can't get no respect." But these days, that's a compliment. It's almost as if being allowed a space on the Barnes and Noble new fiction releases shelves is an insult: "You write like Stevie Wonder sees. Welcome aboard." - Paul A. Toth

"First, let me just say that this author, CB Smith, delivers up a delightful taste of real-life "Artistic" justice in the book Still Life with Psychotic Squirrel. I gave my first star for his originality, cleverness, and loose-comic reality checks. The second star, I gave for his capablity of bringing back my own childhood memories, and the third star I gave for the chapter "Auntie Terrorist"... hilariously real for me, as were so many of the other childhood events he offered up in this charming yet giddy book of life. The forth star that I gave this novel, is for its historical accuracy and attention to detail where the actual scene set up was concerned. The fifth star, I gave this novel for blending together the reality checks with real-life situations that I am sure we have all 'suffered' through from time to time in our own past family experiences. Although a different and a bit 'Squirrelly' in style, our Author's rendition of a "Still Life" portrait, sets you up for a fun fall--yet again, that is its title! A fun weekend read!
Ex; To Uncle Henry who just 'chose' to eat another Aunt's cookies at sunday dinner:
Henry's wife: "Henry? Why don't you like my cookies? The ones I slaved over for the last three days?
Henry: "Uhmmm, well, he stuttered, it's not that dear, it's just that these ones looked so good...
Wife of Henry: "Oh!" she snapped, "I see, THAT one looked good, but MINE didn't?
...lol... I've heard that one before! Haven't you? Hint to hubbies, always put something on your plate from wifey first at family gatherings!
One sentence review for book jacket:
"Fast-paced, filled to rim with reality and fun, which makes for an encitful read." - Jack "Ace" Hamilton
Labels: C. B. Smith