Frederick Ted Castle - The blackness of her whiteness was intense: "an unholy marriage of Gertrude Stein and James Joyce" 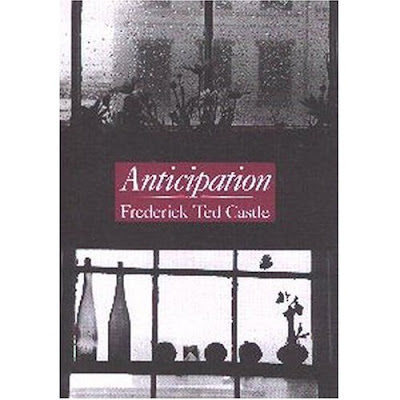 “Written when the author was about 25 years old (the writing spanned three years), Anticipation is a book full of wisdom and the laughter of youth. It could be characterized as the emergence into the world of an intriguing mentality: like James Joyce's A Portrait of the Artist as a Young Man, it contains, as the author says, "all my youthful revery." For his discursive exploitation of all kinds of narrative devices, the author has been compared to other markedly innovative writers, such as Melville and Sterne. But Frederick Ted Castle's book is really unlike any other, and almost necessarily Anticipation waited eighteen years after its completion in 1966 to be first published. It was been re-released in the Recovered Classics series in 1996. While full of poetry, it is written in a lively and readable prose style. Although abandoning many conventions, it affords compensating pleasures. Sometimes referred to as an "epic novel," Anticipation redefines both the epic and the novel: the character called "myself" becomes a modern hero not because his exploits are heroic but because of the scrutiny devoted to the interior of his psyche, especially as refracted through portraits of friends. Upon its first appearance, the reviewer for The New York Times Book Review predicted: "Anticipation will last. It is a presence one wants to have around..."

“Charms with truly authoritative confidence in the power of poetic perception to generate form, the architecture which amounts to meaning...” - Patricia Eakins

“An experiment is as rich as its effect. The wondrous quality of joyous digging in language and intellectual play that permeates Frederick Ted Castle's first novel is half the story. Or, rather, it is the only story in ''Anticipation,'' a novel in which everything that happened to Mr. Castle in the year 1963 is put down in brilliant, funny and parodistic turns. Mr. Castle's novel has a tradition - it stems from the discursiveness of Laurence Sterne (it apes ''Tristam Shandy'' in substituting photographs for blank pages) and James Joyce (it pays allegiance to ''Ulysses'' in its parodies of early literature and contemporary antinovels and high - or low - romance). For extra measure, there are diagrams, letters and notes in poor handwriting, as well as long passages of undistinguished elementary French. But, unlike Sterne and Joyce, and even the French antinovels of the 1960's, ''Anticipation'' lacks a real narrative. For some readers the unity of a writer's brilliant wandering thoughts on the human condition - and especially his own - may prove enough compensation; Mr. Castle is extravagant in spending his talents of wit and invidious humor in this provocatively experimental novel in which everything happens in the mind. Still, others will insist that Mr. Castle's previous neglect is justified. (He wrote this novel in the mid-1960's.) ''Anticipation'' will become an addiction for a few and a throwaway for others, yet it will last. It is a presence one wants to have around, but its waywardness excludes it from mainstream literature. It has everything but a center; it is a magnificent sideshow.” - Martin Tucker 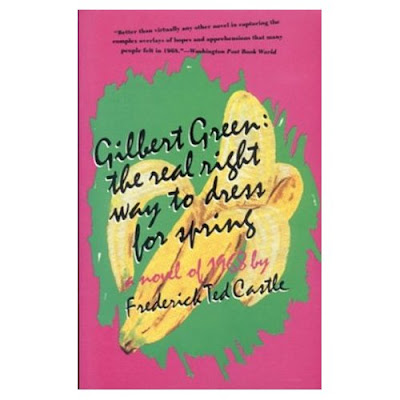 “Castle's previous novel, Anticipation, won praise for experimentalism, wit and wordplay. This novel is perhaps less experimental but certainly less witty and playful in its use of language. Set in 1968 and peopled with many of the New York art scene crowd of that era, such as Andy Warhol and his cohorts, the book is ostensibly about a songwriter, the eponymous Gilbert Green, and the people around him. Castle's admirers will find some literary excitement in his attempts to weave an almost mystical story about Green, told through shifting perspectives and occasional verse. Others may deem it bereft of the imagery and literary life that an unconventional narrative demands.”

“A compound of all the in-between moments that memory tends to edit out: the off nights, the bar talk, the transient fantasies. Since the milieu he's writing about was peculiarly enamored of such ineffable moments, Mr. Castle's method couldn't be more germane. ...Gilbert Green demands almost unlimited indulgence from the reader, but it pays back with the real air of a gone time, captured live.” - Geoffrey O'Brien

“It is a realistic novel, but the sense of reality it aims at has little or nothing to do with the worn-out conventions of novelistic realism.... The miracle of this novel is that it still seems fresh as spring, it still sings.” - John Ash

“Gilbert Green succeeds better than virtually any other that comes to mind in capturing the compex overlays of hopes and apprehensions that many people felt in 1968.” -Washington Post Book World

“Here, in short, is a 1960s paradise... History has recently ended, and there is nothing left to do but play. Maybe my memories of the 1960s are a little bit mistaken, but I recall a lot of us actually believed this stuff. Ted Castle renders that belief with visionary fidelity. Castle also renders the loss of this paradise... What seems to me most extraordinary about Gilbert Green, more than the goofy humor and the sometimes startling turns of the plain-speech prose, more than the dead-accurate set pieces of 1960s dialogue and the insider's account of Andy Warhol's Factory, is Castle's success in making the reader feel that the climax is tragic.” - The Nation

“Frederick Ted Castle says he wrote this "novel of 1968" during the winter and spring of that year, then spent the next eighteen years "editing." Yet when McPherson first published the book in 1986, reviews, though few, praised the novel's freshness of voice as much as its success in capturing the spirit of a time when, Castle writes, "we didn't have any idea . . . that there was such a thing as a history that would actually concern us." And indeed, history, the nature of one's involvement in history, and the difference between what is real and what is true are among Castle's concerns. Yet Gilbert Green is not a fictionalized version of, say, Charles Kaiser's 1968 in America, nor does Castle locate his plot within the context of the year's front-page moments as did John Updike when he used as backdrop in Rabbit Redux the moon landing and other events of the summer of '69. As Stuart Klawans, who reviewed the book for the Nation, observed, Castle's is "a 1960s paradise ... where the state, if you bother to think about it, is probably off somewhere withering away." Or so it might have seemed to Castle's characters, who are so obsessed by their own projects, relationships, and desires that the world's business is at best an excuse for Yippie-style absurdist terrorism or a bit of static barely discernible amid the loud music and navel-gazing chitchat.
How, then, does Castle evoke the sixties? In part, through his narrative voice, which is less stream-of-consciousness than a sustained exercise in free-writing that privileges vagueness and inexactness, self-conscious asides, banal poetry, and sometimes plain bad writing but in the process enacts the way such people as populate this novel thought and spoke and fumbled their way toward typically sixties sorts of acts (such as spontaneous movie-making for the simple reason that "that was what we were doing that day"). Castle also manages to capture the spirit of that time by seeing his characters as they do not see themselves--as emblematic of the period's strengths and weaknesses. And who are these people? Well, Gilbert Green is a version of Andy Warhol and the novel generally a roman a clef, Green's entourage the sort associated with Warhol's Factory and described in such books as Ultra Violet's Famous for 15 Minutes and Jean Stein's Edie: An American Biography.
Gilbert Green has, in short, much to recommend it: its sixties humor and surreal Burroughsian dreams, stretches of language poetry and an on-the-road subplot, its improvisational defiance of novelistic conventions, and moments when the amphetamine-spiel prose gets something just right, as when a character looks down upon a naked woman in bed in a dark room and notices that "the blackness of her whiteness was intense." In Castle's elliptical excursion into the way we lived then can be found an answer to why that time of potential greatness faltered tragicomically. Perhaps all the answer we need is here in this one remark: "They felt weak with laughter and drained by fantastic visions of the past and of the future. They had had a great time on the town and then they fell asleep." - Brooke Horvath
Labels: Brooke Horvath Frederick Ted Castle