Mathias Énard - 517-page long, train-like, more and more frantic sentence: a journey to the End of the world's final memories 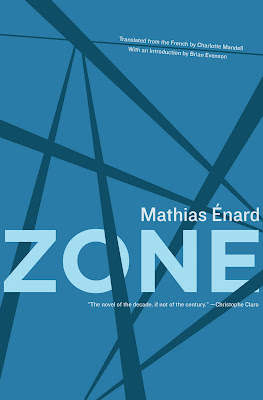 "Francis Servain Mirkovic, a French-born Croat who has been working for the French Intelligence Services for fifteen years, is traveling by train from Milan to Rome. He’s carrying a briefcase whose contents he’s selling to a representative from the Vatican; the briefcase contains a wealth of information about the violent history of the Zone—the lands of the Mediterranean basin, Spain, Algeria, Lebanon, Italy, that have become Mirkovic’s specialty.
Over the course of a single night, Mirkovic visits the sites of these tragedies in his memory and recalls the damage that his own participation in that violence—as a soldier fighting for Croatia during the Balkan Wars—has wreaked in his own life. Mirkovic hopes that this night will be his last in the Zone, that this journey will expiate his sins, and that he can disappear with Sashka, the only woman he hasn’t abandoned, forever...
One of the truly original books of the decade—and written as a single, hypnotic, propulsive, physically irresistible sentence—Mathias Énard’s Zone provides an extraordinary and panoramic view of the turmoil that has long deviled the shores of the Mediterranean."

"Homeric in its scope and grandeur, remarkable in its detail, Énard's American debut is a screaming take on history, war, and violence. Francis Servain Mirkovic, the son of a French father and a Croatian mother, is a spy whose job it is to resell stolen secrets to their legitimate owners. His "Zone" is the Mediterranean. It is the early 21st century and he is on his last mission, taking a train from Milan to Rome under a fake name and revisiting, in a blistering stream-of-consciousness (periods are few and far between), his childhood, his career, and various women, among them Sashka, the Russian painter he plans to meet in Rome; Marianne, from his youth; and Stéphanie, his fellow agent. Weighing heavily on him is his time with the Croatian army during the "Yugoslav madness," where he witnessed and took part in atrocities. As Francis's train speeds along, his story picks up momentum, becoming nearly frantic by the final stretch. Mandell's translation of the extravagant text is stunning." - Publishers Weekly
"Emulating the rhythm of a locomotive as well as the train of human thought, this modern epic by Enard is written as a single sentence, transcribing the mental wanderings of one man as he travels by train from Milan to Rome. Francis, a French Croatian intelligence agent specializing in war crimes, is carrying a list of names in a briefcase that he intends to sell to certain individuals at his destination, an event he refers to as "the end of the world." Through his thoughts and memories, "so many images linked by an uninterrupted thread," the nature of the list is slowly revealed, along with the details of his own involvement in the wars and violence of the region he calls the Zone: the Balkans, Lebanon, Israel, Egypt, Algeria, and other areas of the Mediterranean. Literary references abound, from The Iliad to Dalton Trumbo and Ezra Pound. Enard's novel is a stylistic triumph and an artistic achievement, comparable in ambition and scope to Roberto Bolaño's 2666. Accessibility is a different matter; only the most intrepid readers are advised to embark on this journey." —Forest Turner 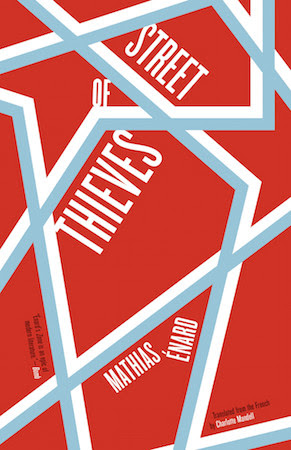 
“A tremendous accomplishment. . . . Énard’s Zone is, in short, one of the best books of the year”
—Daily Beast


Exiled from his family for religious transgressions related to his feelings for his cousin, Lakhdar finds himself on the streets of Barcelona hiding from both the police and the Muslim Group for the Propagation of Koranic Thoughts, a group he worked for in Tangier not long after being thrown out on the streets by his father.
Lakhdar’s transformations—from a boy into a man, from a devout Muslim into a sinner—take place against some of the most important events of the past few years: the violence and exciting eruption of the Arab Spring and the devastating collapse of Europe’s economy.
If all of that isn’t enough, Lakhdar reunites with a childhood friend—one who is planning an assassination, a murder Lakhdar opposes. A finalist for the prestigious Prix Goncourt, Street of Thieves solidifies Énard’s place as one of France’s most ambitious and keyed-in contemporary novelists. This book may even suprpass Énard’s earlier work, Zone, which Christophe Claro boldly declared to be “the novel of the decade, if not of the century.” (Read an Excerpt)


. . . he was good to me and I knew (or liked to believe) that he had taken me in without ulterior motives; he had given me lessons on morality, true, but no more than a father or a big brother. He would often repeat, laughing, that my detective novels were rotting my mind, that they were diabolical books that were driving me to perdition, but he never did anything to stop me from reading them, for example, and if I hadn’t seen him with my own eyes leading the group of fighters at night I would have been incapable of imagining for a single second that he could be connected, closely or remotely, with a violent action.

Street of Thieves is a feat of the imagination propelled by deep cultural familiarity and experience, an extraordinary animation of another person—a particular fictional human being who longs for old-fashioned liberty—superficially unlike the author but surely resembling most readers on a fundamental, intrinsic level. Reading this, I imagined the author inspired to tell the story of someone on the peripheries of the Arab Spring, not caught on camera and distributed around the world, someone longing for what’s so often taken for granted, the freedom to do what we’d like, to cross borders and walk hand in hand with a loved one, to read detective novels or even contemporary Euro Lit in translation.
Other than Ben Lerner’s recent 10:04, which ends with Superstorm Sandy circa Halloween 2012, I can’t think of a novel that relies so thoroughly on recent events (A Hologram for the King by Dave Eggers mentions the BP spill but it’s only a line). Novels involving 9/11 took at least three or four years to come out, right? In the final third of Énard’s Street of Thieves, the 2012 demonstrations in Barcelona take center stage. Helicopters churn overhead, rubber bullets fly, protestors smash bank windows, and streets in flames are cordoned off by cops in riot gear:


Subversion was everywhere, you could feel the violence and hatred of the boys in blue rising: they were rushing around, restlessly brandishing their long clubs, their rifles, their shields – opposite them, the young people lowered their pants to show their asses, called the cops assholes and sons of whores; a little group dismantled some metal trashcans to throw at them, others, oddly, attached a tree, maybe to turn it into a giant spear. The confrontation was unequal and reminded me of a battle of conquistadors, with armor and harquebuses, against of troop of Mayan or Aztec civilians I had seen an engraving of in a history book. Conquest was on the march.

There’s a mention of the Spanish king’s hunting trip to Africa, and a quick Google search reveals that it occurred in mid-April 2012. Inclusion of contemporary events, in part, makes this an urgent read. Pound’s famous dictum is “literature is news that stays news.” Énard’s use of the news as larger societal parallel of the narrator’s troubles comes off more natural than opportunistic or forced.
This sense of the story organically unfolding—despite what could have seemed like pedantic appropriation of news and narrator—owes a lot to the author’s genuine talent and skill. “You can’t teach height,” basketball commentators always say. Something similar applies to Énard’s sensibility and instincts:


Cities can be tamed, or rather, they tame us: they us know to behave, they make us lose, little by little, our foreign surface; they tear our outer yokel shell away from us, melt us into themselves, shape us in their image — very quickly, we abandon our way of walking, we stop looking in the air, we no longer hesitate when we enter a subway station, we have the right rhythm, we advance at the right pace, and whether you’re Moroccan, Pakistani, English, German, French, Andalusian, Catalan, or Philippine, in the end Barcelona, London, or Paris train us like dogs. We surprise ourselves one day, waiting at the pedestrian crossing for the signal to walk; we learn the language, the words of the city, its smells, its clamor . . .

Lakhadar testifies that he’s more than a Moroccan, a Frenchman, a Spaniard, a Muslim. Énard, similarly, is more than a French male writer teaching Arabic in Spain. He’s a writer whose literary identity and spirit seem unbounded. Deep knowledge of the past and presentiments of the future inform his perspectives and insights into the present. With Street of Thieves, he’s written an accessible novel of ideas and politics, propelled by longing for love and freedom. Taken together with Zone, it’s clear I’ll read everything Énard writes from now on: his language jumps across and down the page, he doesn’t fear engaging with complicated ideas, and he manages to animate living, breathing characters who savor the complexities and ambiguities, the beauties and horrors, of life.
at November 22, 2010
Email ThisBlogThis!Share to TwitterShare to FacebookShare to Pinterest
Labels: François Monti, Mathias Énard