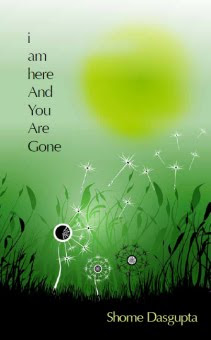 Shome Dasgupta, i am here And You Are Gone, Outside Writers Press, 2010.

“Mary and Jonas were on the playground, twirling around and around, until Hi-C came back out of their mouths. Mary’s favorite cartoon was Looney Tunes. So was Jonas’. He asked her to marry him—she said yes, and he gave her a dandelion.” – from I Am Here And You Are Gone

"Shome Dasgupta’s debut chapbook, i am here And You Are Gone, maps the lifelong bond between Mary and Jonas, childhood friends perpetually approaching something more. Dasgupta weaves their world in elegant simplicity, striping imagery and prose to an essential core while never devaluing the sentiment behind it.
i am here And You Are Gone is a love story that elevates above romanticized ideals, combining prosaic, poetic, and illustrative elements to describe a relationship in terms rarely explored in contemporary fiction."

“Shome Dasgupta writes about young love with a heartbreaking honesty and simplicity that transcends anything I’ve read in recent years. As we follow Jonas and Mary from kindergarten to senior year, we see a range of textual expression that is both innovative and wildly appealing. This book cracks powerful with youthful thunder, black echoes laced tightly with ephemeral innocence. Dasgupta’s debut hits the mark, and leaves one.” - Mel Bosworth

“From the start, I fell in love with this book. Shome Dasgupta takes on perhaps the most common of all subjects—love—and makes it somehow fresh and new. Stunning in its use of form, language and character, i am here And You Are Gone is a delight. The book and its author are remarkable. This is the first you may be hearing from Shome Dasgupta, but I can’t imagine it will be the last.” -Rob Roberge

“In i am here And You Are Gone, Shome Dasgupta writes with a sparse and mathematical elegance, creating a system of symbols and spaces with which to describe young Jonas’ growing affection for his friend Mary. Throughout the too-fast years of their youth, the two friends hurtle across what must feel to them like a lifetime, moving like two near-parallel lines approaching the same point, one set so impossibly infinite that they might never reach it together. Still their paths pull close, closer, so close that no matter how we might look we may be unable to divine what unsolvable span it is that at the last separates them–and so perhaps us–from each other.” - Matt Bell

"Lafayette, Louisiana, native Shome Dasgupta’s debut chapbook, “i am here And You Are Gone,” evokes memories of days spent in the schoolyard, that first crush and the trials of growing up. Inspired by the author’s stop at a red light where he caught a glimpse of an elementary school merry-go-round, this little book (winner of the 2010 Outside Writers Press Fiction Chapbook Contest) is an ode to childhood friends and their lasting impact on our lives.
“I remembered being out on the playground, there were flowers everywhere. I was always picking them. There were four-leaf clovers. That’s where it all began,” says Dasgupta.
The merry-go-round also gave him the name for one of his main characters, Mary, who forms a friendship with Jonas in Kindergarten. Dasgupta chronicles their school days in chapters organized by grade, so the reader follows the two friends’ relationship through their senior year of high school.
A sweet story on its own, it’s Dasgupta’s use of textual, visual elements that make this book so unconventional and charming. Rain is depicted as slashes on a page at one point, and when Mary becomes a sophomore and tries out for the cheerleading team, the words “Rah Rah Rah” are stacked for emphasis.
Dasgupta also breaks up the text with letters between Mary and Jonas, and it’s this format that announces the book’s surprising end. The author says these are love letters and that he played around with the visual elements to add pacing and interest, a style that works to perfection.
“i am here And You Are Gone” also has a poetic feel throughout, as if it’s half poem, half story, evident in the passage below.
Brief Encounter In The Museum
I hear the calling of my name in the sound of footsteps;
I do not stop until I feel a tap on my shoulder. I turn
around and see pain’s glory; we do not speak, nor do
we continue to walk, but we stand still and study each
other until we fall.

We are motionless: I am a mosquito, you are amber,
and we’re fossilized.
Dasgupta says he started out writing poetry and played around with some teen angst poems himself in high school. Music is also an influence, as is Gabriel Garcia Marquez, known for his magical realism and themes of love, and William Faulkner.
In the advance praise for “i am here And You Are Gone,” short story writer Rob Roberge is quoted as saying, “Shome Dasgupta takes on perhaps the most common of all subjects – love – and makes it somehow fresh and new. Stunning in its use of form, language and character, “i am here And You Are Gone” is a delight. The book and its author are remarkable. This is the first you may be hearing from Shome Dasgupta , but I can’t imagine it will be the last.”
I agree. In “i am here And You Are Gone,” Dasgupta manages to tell a very real story of love and loss while at the same time allowing us to experience a magical time in these characters’ lives. It may be a quick read at 88 pages, but you won’t soon forget the story of Mary and Jonas and will most likely be wondering what Dasgupta will write next.
“i am here And You Are Gone” is available from Outside Writers Collective and Press and on Amazon. Deep South is proud to have Shome Dasgupta in our hometown of Lafayette, Louisiana. He attended Episcopal School of Acadiana, and former classmates and teachers may notice a few references to his schooldays in this book. He went on to graduate from the University of Louisiana at Lafayette, receive an MFA in Creative Writing from Antioch University in Los Angeles and now teaches at South Louisiana Community College. To read more of Dasgupta’s writing, check out his website and/or read his story “XXXXXXXXXXXX” in Southern Voice fiction section. His skill with visual language also comes into play in this tale of one guy’s late-night adventure in a sugarcane field." - Erin Z. Bass
Labels: Erin Z. Bass Shome Dasgupta