Bobby Henderson – Pastafarian joke religion: The person privileged enough to be touched by a noodly appendage is never the same 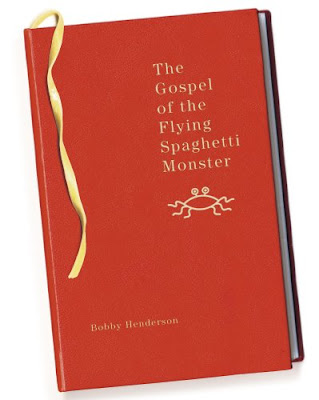 Bobby Henderson, The Gospel of the Flying Spaghetti Monster, Villard, 2006.

“An elaborate spoof on Intelligent Design, The Gospel of the Flying Spaghetti Monster is neither too elaborate nor too spoofy to succeed in nailing the fallacies of ID. It's even wackier than Jonathan Swift's suggestion that the Irish eat their children as a way to keep them from being a burden, and it may offend just as many people, but Henderson, described elsewhere as a 25-year-old "out-of-work physics major," puts satire to the same serious use that Swift did. Oh, yes, it is very funny.” - Scientific American

“Behold the Church of the Flying Spaghetti Monster (FSM), today’s fastest growing carbohydrate-based religion. According to church founder Bobby Henderson, the universe and all life within it were created by a mystical and divine being: the Flying Spaghetti Monster. What drives the FSM’s devout followers, a.k.a. Pastafarians? Some say it’s the assuring touch from the FSM’s “noodly appendage.” Then there are those who love the worship service, which is conducted in pirate talk and attended by congregants in dashing buccaneer garb. Still others are drawn to the Church’s flimsy moral standards, religious holidays every Friday, or the fact that Pastafarian heaven is way cooler: Does your heaven have a Stripper Factory and a Beer Volcano? Intelligent Design has finally met its match–and it has nothing to do with apes or the Olive Garden of Eden.
Within these pages, Bobby Henderson outlines the true facts– dispelling such malicious myths as evolution (“only a theory”), science (“only a lot of theories”), and whether we’re really descended from apes (fact: Humans share 95 percent of their DNA with chimpanzees, but they share 99.9 percent with pirates!)”

“You've heard the one about the Kansas City School Board deciding whether to teach intelligent design alongside evolution in their science classes, right? It was no joke: This actually happened, last year. Where the joke came in was when Bobby Henderson, a twentysomething physics major from Oregon, wrote the board an open letter insisting that, if intelligent design were to be taught, the theory should mention the deity of Henderson's personal (and created-just-for-the-occasion) religion: the Flying Spaghetti Monster.
This open letter proliferated its way across the World Wide Web as such cleverly constructed bits of philosophical snarkery tend to – like chain lightning. Which led, as if instantly, to T-shirts, bumper stickers, car ornaments, and a whole range of FSM paraphernalia for promoting one's personal belief in what's come to be called Pastafarianism.
Now Villard's published a trade paperback of The Gospel of the Flying Spaghetti Monster, in which chief prophet Henderson, with help from several collegiately degreed acolytes, brings us the exegesis of the Noodly One to improve our understanding of His role in the creation of all that exists. Especially the parts that include pirates.
Using altered stock photography, crude drawings, and much tongue-in-cheek bullshittery, the Gospel tells us what's wrong with the whole evolution idea, provides evidence of Pastafarianism throughout human history, explores the connection between the diminishing pirate population and global warming, and reveals what the FSM prefers that we, as his sentient creations, do with our lives. It also describes the heaven – complete with a Beer Volcano and a Stripper Factory – that awaits the true believer after bodily death.
The book is, mostly, a padded, steroidal version of Henderson's original school board letter. It's a necessary bit of comic relief in the overly serious battle between science and superstition, a volume that will appeal to people fed up with the ongoing debates over Intelligent Design and other such idiocies. As the Pastafarians solemnly intone: RAmen.” - Wayne Alan Brenner 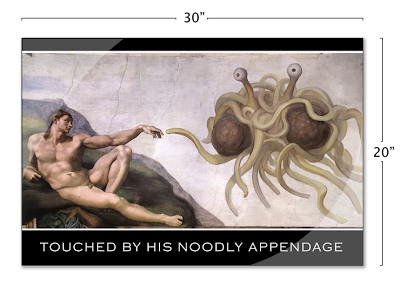 Simon Singh: Was the world created by god, evolution or pasta?

Sarah Boxer: But Is There Intelligent Spaghetti Out There?

James Langton: In the beginning there was the Flying Spaghetti Monster

Van Horn, Gavin; Lucas Johnston (2007). "Evolutionary Controversy and a Side of Pasta: The Flying Spaghetti Monster and the Subversive Function of Religious Parody". GOLEM: Journal of Religion and Monsters 2