Christopher Spranger - Hybrid of La Rochefoucauld and Frankenstein: the ominous and the ecstatic do a danse macabre in perfect unison - maxims, micro-essays, epigrams, and outbursts on various subjects 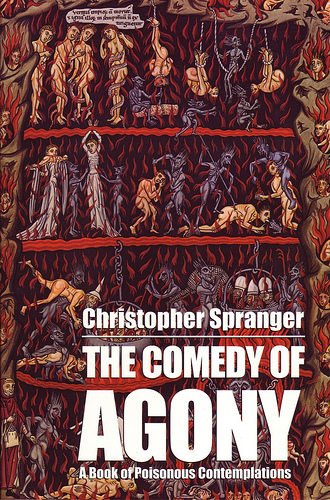 'This book is the fruit of my desire to perform simultaneously two feats impossible to perform simultaneously... to write the next Commedia, and to bring forth a volume whose every page would remain pure of the word 'God.' Needless to say, the more I tried to exclude this latter from my concerns, the more I was haunted by Him.' - Christopher Spranger

"Like some sort of hybrid of La Rochefoucauld and Frankenstein, Christopher Spranger has dusted off that venerable relic of literary taxonomy, the epigram, and reanimated it for the twenty-first century. The precocious Spranger has been compared to Cioran not only for his gravity, profundity, spookiness and gloom, but also because no one since the great Romanian has used the aphorism with such verve and vitality, obliquity and subtlety, originality and eloquence. The maxims and micro-essays that make up Spranger's The Comedy of Agony trace their ancestry to Dante as much as to Diogenes; each of the volume's gnomic distillates stings like Schopenhauer, bites like Bierce; each is a sententious sermon, an elegiac word-capsule suitable for inscription on Chamfort's tomb. Spranger's comedy does not pretend to be divine but instead attempts to illuminate the fineries of our hellish existence. The imp of perversity runs riot in the savage apothegms of Spranger's The Effort to Fall, sneering like Franklin's Poor Richard on an absinthe jag, smirking like a senile Twain snidely shaking his stick at the spiritual disease that is man. Yet, for all of its sinister charisma, the book is more than a box of infected bon-bons. Layer upon layer, Spranger underscores the dark ironies of existence with exquisite refinement and devilish delight. Charting a path through a hell of gnostic resignation, futilitarian pessimism, and the Buddhist doctrine of non-attachment, the author chisels in its walls the foibles of humankind. Each of Spranger's diminutive texts packs an explosive punch. Caustic as acid, scathing as radium, they accost the mind and taunt the soul. In an era when larger literary formats such as the novel have become stale, if not stagnant, the bite-sized prose-parcels of The Effort to Fall and The Comedy of Agony ooze literature with a capital L." - Gilbert Alter-Gilbert 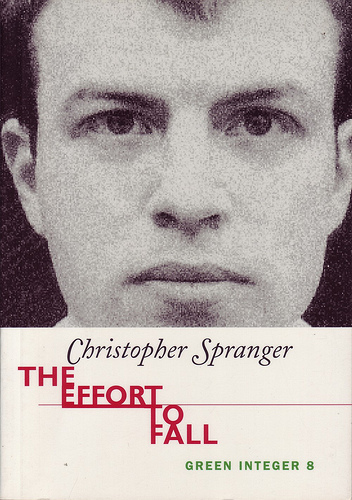 "The Effort to Fall marks the debut work of Christopher Spranger. In this work, written in his early twenties, Spranger lets his imagination roam a wide range of philosophical concerns, including issues of love, faith and belief, the role of writing in culture, and subjects ranging from history, music, and art to philosophy itself. In the tradition of the great aphorists from Pascal to Wilde, from Henri Michaux to de Chazal, Spranger brings wit and new meaning to his subjects. “The ideal aphorist? A man with the wit of an Oscar Wilde and the soul of a Gilles de Rais.”
A book of pithy and brilliant observations, The Effort to Fall is also a deep meditation on the relationship between society and destruction, on relation itself as a precursor of silence and death. Given the wisdom of this small book, it is hard to imagine it as the author’s first publication." - Gilbert Alter-Gilbert

If there is a pleasure involved in looking at things, it is the


pleasure of being neither them nor ourselves. Sight allows us to slip between the weight of our own being and that of the world and to unwind in the emptiness between them.

Crucifixion is a piece of extravagance which only a god of Christ's caliber could have gotten away with. Could a Jupiter or a Vishnu have retained his clout nailed to a cross?


The ultimate thief, music steals from us our dreams, our emotions, and our memories, and then disappears without a trace.


God does not have the monopoly on omnipresence: this is a privilege enjoyed by Injustice as well.


The writer, making every effort to appear innocent and noble, takes his revenge with the pen; while the murderer, less hypocritical, takes it with the sword.


"Would you like to add any remarks concerning your forebears and fellow practitioners of epigrammatic exposition?
- Anyone who sits down and tries to reduce the chaotic contents of his uncontrolled mind to a few meaningful sentences is insane.
Are you still trending towards somewhat larger textual formats?
- I sometimes consider writing in a more expansive way but words frighten and overwhelm me. When most of them have gone and only a few remain I feel relieved. My ambition-—assuming it can be called that-—is to write a book from which the words withdraw, yielding dominion to blank space.
What do you see as the future of mankind?
- The future of mankind is something I'd rather not see. Supposing it has one, nothing else does.
Do you view the world from an Ecclesiastes-like perspective, or do you see it as evolving?
- I believe that in debating the question of progress we distract ourselves from our essential predicament. What does it matter whether progress exists or not when the foundational materials are defective? A few steps up or a few steps down--the wood we're standing on is going to crack and we're going to fall through and break our necks either way." - Interview by Gilbert Alter-Gilbert


A selection of Christopher Spranger's aphorisms (these have not appeared in book form):

Everything is just an extension of the original question, including the answer.

On the subject of transmigration, a noted scholar writes: "One Indian philosopher took the relatively optimistic view that all, fools and wise alike, would find release after wandering through eight million four hundred thousand births." It is not often that one comes across words that inspire so much hope.

The machine is in the process of making slavery universal and work perpetual. But even Aristotle predicted it would make slavery unnecessary, the ancient philosopher as deluded on this point as the latter-day utopian. Coming from a tradition more conscious of the Satanic restlessness at the heart of our species, a tradition in which doing nothing receives its due as an unrivalled accomplishment, could an Eastern sage have made the same mistake? Zhuangzi's farmer, confronted with the student’s labor-saving device, laughed derisively--and with each passing day we are in a better position to understand why.

To the friend who mentioned that Gibbon celebrated the completion of his thirty-year task by taking a walk in his garden, I replied that I couldn’t imagine a better way of celebrating it—aside, perhaps, from sitting silently for several hours before a wall.


After which it occurred to me that Bodhidharma, the founder of Chan Buddhism, is said to have sat for nine years before a wall. I wonder what he was celebrating?


Nothing is so much in need of a good wrinkling as that which has been perfectly ironed.


I often think of how Nietzsche ran up to that donkey which was being whipped and threw his arms around it protectively, sobbing. With this one gesture he managed to express everything he'd already expressed before in his books—but now he was communicating so plainly, so directly. The carnival mask had come off.


Randomly opening the Huainanzi, I read: "If you follow limited examples and do not know how to travel through heaven and earth, you could not be more confused." No way to grasp it. No way to respond. Enraptured by a truth beyond my reach, I shut the book."
Christopher Spranger's web page