Jason Stuart Ratcliff - Fascinating train-of-thought writings from a schizophrenic: We don't want any more petty tales. Give us pure mind and self, and everything terrible and holy within you 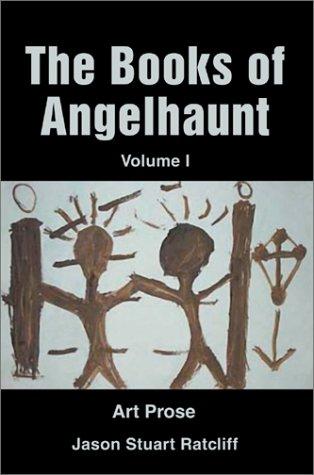 
„In these four Angelhaunt books, Jason Stuart Ratcliff explores his schizophrenia for all the creative treasures it holds within it. Ratcliff puts art prose beyond where it has ever gone, transcending the line between fiction and poetry, and creating a manifesto of sorts to the world of literary art that says, We don't want any more petty tales. Give us pure mind and self, and everything terrible and holy within you.“

„About a third of the way through Jason Stuart Ratcliff’s The Books of Angelhaunt, he intones (yes, intones), “I’m trying to install in you a sense of madness. The mad sense is a sense of mystery and the numinous. There are distinct aspects to madness: one is fragmentation, another is paranoia, another is confusion.”
In parrot of this, I’ll simply say there are three distinct aspects to this large collection of plotless rants: one is fragmentation, another is paranoia, another is confusion. However, you should not mistake this statement for a negative value judgment. While Angelhaunt, Volume I may be fragmented, paranoiac, and occasionally confusing, it is as often (and sometimes simultaneously) scintillating, poetic, and wittily surreal.
The collection, ostensibly, is Ratcliff’s exploration of his schizophrenia “for all the creative treasures it holds.” “We don’t want tales and stories,” he rails from the back cover. “Give us pure mind and self, and everything terrible and holy within us.” Believe it or not, this is a fair advertisement for the material that lies between the covers of this challenging and ambitious work. Its blend of sacred and profane tailoring in a prosy-poetic suit reminded me more than a little of the poetry and essays of the slightly deranged but brilliant French writer Antonin Artaud and of some of the more freeform work of William Burroughs and Henry Miller. Sometimes confusing, always thought-provoking, and often rewarding.
The first book “Cabeza de Vaca” is the most successful, in large part because it has the most cohesive structure of the four Angelhaunt texts. Taking his lead and name from the anthropo-social writings of the 16th century Spanish explorer (whose travels in book form made it onto the aforementioned Henry Miller’s list of 100 most influential books), the author weaves a fanciful documentation wherein de Vaca/Ratcliff comments on the lifestyles of a series of surreal indigenous peoples, as well as taking part in obscene rituals and interactions with a character known only as the Moroccan Negro. Despite the fact that the author comes right out and says the year of the writing is 1534, the narrative actually makes quantum jumps both temporally and rationally. (Better make that “irrationally.”) In reality, this is case study madness based on Ratcliff’s modern-day observation (note the Clinton ecstasy cult among others), but it is a pure and lovely madness, at turns fascinating and maddening, often hypnotic. In “Cabeza de Vaca,” the author comes closest to featuring real and ongoing characters, and as such it grabs the reader more successfully than the other three books.
Book two, “A Lone Brain Locked in a Small Apartment” is divided into three parts and veers between first person anecdotes, rants, raves, utter nonsense, and semi-prophetic ramblings. A kind of Anti-Whitman, Ratcliff unreels a twisted song of himself where “plot is a limitation of freedom; logic likewise is a limitation of freedom.” This may be true, but without a mild temperance of one or the other, prose can break down into unreadability, as in this section:
“... inside  wishing  ladder  Jacob  proper  psychology  medication  vindictive  mistake  wrong  love  twin  Mexico  all  him  themselves hope improper unbroken treatment threading  call me angel missing votive candles prime fine trinket stabbed shot murdered zebra  hat  kiln debauchery  justice  cried intelligible  fermented  yeast  barley ...”
Granted, this is may be automatic writing or some exceedingly complex riddle of words; however, we must care enough to explore further, and nonsensical passages like this make it hard for even the staunch reader to want to do so. Employing an experimental free-form technique in fiction is roughly tantamount to tossing your readers onto the back of a crazed bronco: the timid will jump off instantly, while some of the more adventurous will go along with the hard bucks and turns—that is until you start bucking towards the cliff’s edge. At some point even the hardiest will dismount and let you buck over the side and tumble away to literary obscurity. For the most part, Ratcliff turns from this utter edge in time to keep from losing the reader—but not always.
The third installment, “Constellations: a manifesto” is a bit uneven as well, containing much of esoteric value but dropping in and out of the continuity parade, not always to great effect. A “dialogue” between The Penis and The Anus is quite hilarious, and when Ratcliff pursues an issue to any length it is usually interesting, but the lapses in even this kind of twisted logic leave one occasionally disgruntled and distant. This rarefied style could conceivably achieve hyper-luminescence by applying the barest modicum of editorial sense and continuity, but that may be asking too much given Ratcliff’s stern anti-sense agenda.
The fourth book, “The American Revelation Dictionary, Alpha to Acheron” has many of the same drawbacks and strengths as the earlier books. This dictionary-style listing of words and “meanings” (read: abstract ruminations often having little or nothing to do with Webster’s meaning) are frustrating and fascinating. Ratcliff drops this hint as to the genesis of this semantic work:

acephalous: Yes  well the demons and the angels both gave him to understand what the words in that dictionary meant.
acequia: And his mind was very delirious and disorganized?
acerate: Yes his mind was very delirious and disorganized.
acerb: And he would sit and read that dictionary for hours?
acerbate: Yes he would sit and read that dictionary for hours.
acerbity: And this book is what he read?
acerose: Yes, this book is what he read.
There are a few slight weaknesses in Ratcliff’s prose style, though nothing egregious. His occasional repetitive use of simple auxiliary verbs and simple structures in adjacent sentences sometimes imbues Angelhaunt with an almost adolescent tone. This works now and then, especially in the more “prophetic” passages where the staccato sounds a bit like chant; also in some measure this tone imparts a kind of endearing bewildered innocence to the narrator in his profane and surreal world. In other places, however, it undermines the literary weight of the text. (I should also say that much of this work leans more towards Dada than actual surrealism.)
The very bulk of Angelhaunt (Volume I!!!) is its biggest drawback, and given the challenging nature of the work, one wonders why JSR didn’t choose to edit it down to a more manageable size or simply cut out one or two of the books (they aren’t especially dependent on each other). At an edited 200, 250 pages, I might have been willing to dub this a work of prime literary significance; at 541 pages ($26.95 softcover!), it shows much flab, flaw, and excess. This is Ratcliff’s intent of course—to reflect the truth of the diseased mind—and I can’t find it in my heart to upbraid him too roundly. Better a mad, majestic dash at something grand than a mild considered assay into the mainstream; but ... best to write the mad majestic attempt and edit it into something more than vaguely coherent.
I will say that of the many experimental works we receive for review, this one comes closer to literary success (within a hair’s breadth) than most. More often than not Ratcliff’s style, approach, and ideas are weirdly stimulating—on multiple levels. Sex, death, spirit, mind, and bodily fluids hold places of high esteem in the Angelhaunt universe, and Ratcliff has a gift for rooting out the obscenity and grandeur latent in each and all. We will watch his development with great excitement.
Those easily offended by profane and obscene language or acts would be better off reading elsewhere, but those with hardier intellectual/sensual constitutions should hunker down and dig in. Angelhaunt is a hearth of crazy blazing neurons, and if you’re able to suspend belief in mainstream literary standards and practices, this book might just knock your block clean off. Recommended.“ – The Absinthe Literary Review

Jason Stuart Ratcliff was born in California in 1972 and grew up in Aurora, Colorado. At the age of 17 he was diagnosed with schizophrenia and spent the next 2 years in various institutions, including what he considers the longest year of my life at the often physically rough Cleo Wallace Center in Westminster, Colorado. He currently lives in Denver.

„Fascinating train-of-thought writings from a schizophrenic. Ratcliff careens across the borders of profundity and complete nonsense. The content varies; descriptions of fantasy worlds and details of his life which may or may not be real. Some highlights include his fear of owning a hammer (due to the potential damage he fears he could inflict to his property and neighbors), fanatical cult-like worship of the US President, waking up covered in blood, strange demons, etc. His seemingly limitless creativity is inspiring, even if rooted in sickness.“ - overlook1977 at Amazon.com

I know exactly how I'll die. I'll be sleeping in my apartment, and two people--probably a man and a woman--will break in. The man will tie me up on my bed. The woman will then sit on my chest, and I won't be able to breathe till I suffocate. It won't be a particularly painful death, though it will involve quite a bit of terror. After I'm dead, the woman will take a knife from my kitchen, and open up my chest. She will take out my evil heart. Then they will both leave, without touching a thing in my apartment, and use my evil heart in some ceremony. I will be quite old by then, but I will still be living in this apartment, doing exactly what I do now. I'm not exactly afraid of that day--but I look forward to its fruit more than the commission of the act itself. The day before it happens I will wake up knowing that this is the day, and I won't do a thing to stop it.


Read it at Google Books


Read Volume 2
About the author