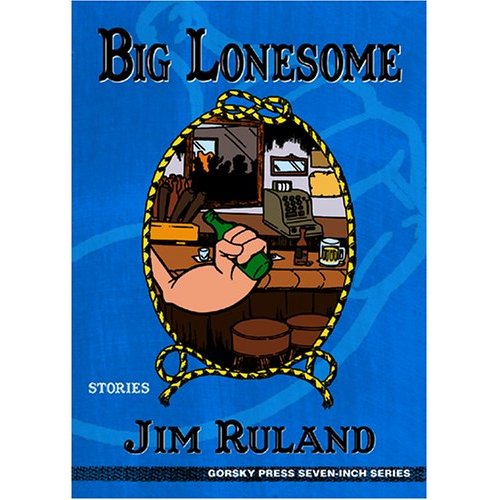 "It's an overstuffed quesadilla of a short story collection. There's some historical fiction that ranges from the Blitz in Belfast to the Chicago Haymarket Riots. There's some crime fiction. At least one sailor story. A stalker's diary from her time in the crawlspace of a stripper's house. Dick Tracy, Popeye the Sailor, and the Big Bad Wolf all make appearances. There's a conflicted catechism about a messed up love triangle. And, in the title story, a 19th century orphan gets mixed up with a clairvoyant school teacher and an Indian named Tonka who may or may not be a robot."

"Wildly imaginative tales of America's past and present. Understanding that history is nothing but a fable purged of grit and grime, Ruland transforms historical fiction into something slick, brutal and weird. Whether he's spinning a lurid yarn about the previous adventures of Popeye, imagining Dick Tracy as a San Fernando Valley police detective, or retelling the story of Little Red Riding Hood in Nazi Germany, Ruland's tales are full of crime and punishment. He isn't afraid to set a teenage mob story in St. Petersburg, Florida, or tell the story of an unlucky pair of pants in the style of a catechism--and every line resonates with the truth of lessons learned the hard way."

"I’m reading Jim’s story collection Big Lonesome right now and I’m really impressed by his voice (this strange cocktail of hard-boiled pulp and surfer sage that straddles generations and genres) which, for some weird reason, makes you trust that he’s going to take you on an interesting ride and possibly show you something special that you haven’t seen before." - Chris Heavener

"Here's a writer with guts and heart and vision, someone to remind us of the possibilities of fiction. Big Lonesome is strange and exciting." - Chris Bachelder

"Jim Ruland’s Big Lonesome isn’t merely a collection of clever, funny stories. More than just a clever author, Ruland is adept at creating precise, bizarre yet completely honest studies of the human condition while surprising us at every turn.
In “Night Soil Man,” the employees of an Irish zoo (owned by the Belfast Corporation) must have the “specimens removed or eliminated” lest a Nazi air raid result in “dangerous animals unleashed on the streets.” The employees have to get good and drunk before taking their guns to do their duty. They eventually are primed for the hunt, though young Simon—the person in charge of cleaning the “night soil” left by the animals—lets his mind wander: “The first animal he comes to is a tapir. What in bloody hell is a tapir? The plaque on the fence is no help. Ungulate. Nonruminant. Nocturnal. But is it dangerous? All Simon knows for certain is that it craps like a pig and looks like one too. A pig with a funny nose.” Though Ruland could have played the entire story for laughs and left it at that (which would have been quite an accomplishment for most writers), he goes further and takes us to a place where we are truly moved by this horrible wartime corporate decision.
It is true that you will laugh aloud at such pieces as “Kessler Has No Lucky Pants,” in which an interviewer poses in-depth questions to an unnamed respondent regarding the fact that a person named Kessler doesn’t own any lucky pants. Why is this important? The answer: “There are days when a certain something extra is required of us and on those certain something extra days we are accustomed to reaching into the closet and finding (on an extra special hanger perhaps?) a pair of lucky pants.” So true, but so odd. Yet Ruland is able to turn the Q&A into something beyond a one-note joke as we learn more about this poor schlemiel who doesn’t own any lucky pants and who is stumbling through life making the kind of mistakes many of us have made.
Some of the stories will make you titter nervously, such as “Still Beautiful,” which takes the art of stalking an ex-lover to new heights. (If you don’t get chills by the end of this story, congratulations, you’re a Martian.)
The rest of Ruland’s collection is strong as well. The title story takes western bank robbing mythos to revisionist heaven. In stories such as “Dick Tracy on the Moon,” “Red Cap” and “The Previous Adventures of Popeye the Sailor,” the author manhandles cultural icons and twists them close to the breaking point, but not quite. He’s not afraid to challenge our assumptions, and in doing so we get to look at the world from a slightly off-kilter angle.
There are no disappointments in this collection; each story offers something different while displaying a mastery of language and an empathetic understanding of what makes us human. Ruland is a remarkable writer who has produced a debut collection that cannot be ignored." - Daniel Olivas

"The thought that consistently kept coming up for me when I read your stories in the book Big Lonesome, was how effective the use of (at-times minor or tangential) history is in many pieces. It’s as if you found these curious little footnotes in marginal history texts, and then dug your detective heels in and polished up a gem (“A Terrible Thing in a Place Like This” is a prime example, in my mind).
- Thank you. It’s funny you should mention that story because I just got an interesting email about it. It started something like this: “Dear Jim Ruland. Did you send a story called “A Terrible Thing in a Place Like This” to The New Yorker twelve years ago?” Apparently, he stumbled on the story in his files and wrote to tell me how much he liked it when he discovered it in the slush pile as a reader at The New Yorker, but wasn’t able to get it published. Just goes to show you never know what goes on behind the scenes at a magazine or literary journal, the futility of reading too much into rejection letters, etc. They never tell the whole story. Nothing ever does. Half-truths are so much more tantalizing.
But “Terrible Thing” started with a happy accident. I became interested in the Haymarket Riots in Chicago and decided to read the Chicago Tribune in the days leading up to the incident to get a better sense of the mood of the city, and I found this wonderful expose of a hog slaughtering facility that makes Upton Sinclair’s The Jungle look like a Sunday school lesson. The expose hijacked my story, made me feel this world in a fresh and startling way. I had to use it. So it was a case of looking for one thing and finding something vastly different. Since that letter I’ve been thinking about that setting a lot. I just might return to it. Or highjack it again. We’ll see.
There is almost a kind of journalistic element at play — like your readers are going to learn something about a time or a place or a population, as they spend time in your book. Are you a big researcher when you work?
- Yes, but in a casual, reckless way. I’m always poring over old books, advertisements, and photographs, looking for points of access. The danger is that history lies. Photographs are staged or posed. Advertising is cultural folklore. Histories are hook-driven arguments molded to fit agendas, settle scores, whitewash wrong-doing. I always try to remember that when we speak of history, we’re usually talking about a crime, and both sides of the law will have their own version of events.
That said, if that stuff is part of the culture my characters swim in, it’s my duty to make use of it. My wife likes to tell the story of a visit to the downtown Los Angeles Public Library. I was researching the boxer John L. Sullivan and came back to our table with a giant stack of books and a crazy smile on my face. I was just so happy! I guess you could say I like research too much. It’s been a problem for me in the past because it can be a huge a distraction. There was a time when I could have taught a class on German Naval Operations in the Atlantic Theater during World War II. Now, of course, I’ve forgotten most of it.
Where does story writing start for you, and do you use history to find characters, events, situations within which you can operate as a writer?
- That’s a great question, and one I’m often unable to answer. The novel I’ve been working on the last two years, which is somewhat autobiographical and set in an Indian casino, has no origin story. There’s no flash of inspiration or insight I can point to and say “That’s when I knew…” When I latch onto something that catches my interest, I want to know everything about it, which leads to tangents, footnotes, etc. From there I seek out primary materials: letters, speeches, diaries, statements from the gallows. The actual words that people used–which is not the same thing as the truth–but is closer than anything I’m going to see on the History Channel. That takes a while, a long courtship before the commitment of actual writing. So to answer your question, I would say I “use” history to find events and situations to apply to my fiction, though that sounds kind of bloodless. My fiction, which often nudges up against one genre or another, is typically event driven. This is why I’m drawn to counterfactual tales, stories that pose the question “What if?” because it gives me the opportunity to create my own version of events over which I have complete authority.
To what degree does “truth” become a factor in the story, if at all?
- If there’s truth, it’s my own. Right now I’m playing around with a story about debtor’s hospitals: you check out when you’re all paid up. I read a story in the Los Angeles Times about this situation in Nigeria. It wasn’t that big of a leap to wonder “What if that happened here?” - Interview by Matty Byloos

“Dim eyes down the length of the bar swivel in our direction, the ripple effect of their cattle-prodded curiosity is like an old television warming up, weird distortions yielding to something banal and dull.” – From the story “The Eggman,” by Jim Ruland.

"Eastwood” by Jim Ruland from So Say We All on Vimeo