Shana Moulton -A tender and enigmatic assemblage almost entirely devoid of words, which reads like a challenging and hysterical existential essay, an empathic exploration of modern spiritualism, a cynical contextual analysis of the marketing of the new age, a personal memoir, a mockery of a certain trend towards neo-mysticism in modern art or a map through “the decadent maze of spiritual liberation” 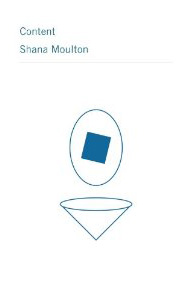 
"For this book I was thinking about Prevention magazine and things I wanted to put on paper if I were to die soon. Which is not how I usually think when I'm making something, but I've never made a book before so that was my approach. It is basically summing up my philosophy. A list of contributors: Jacob Ciocci, Tressie Horton, Craig LeBlang, Chuck Moulton, Vivian Moulton, Daisy Press, Vivian Puhn, Lucy Stein, Charles Wolski." 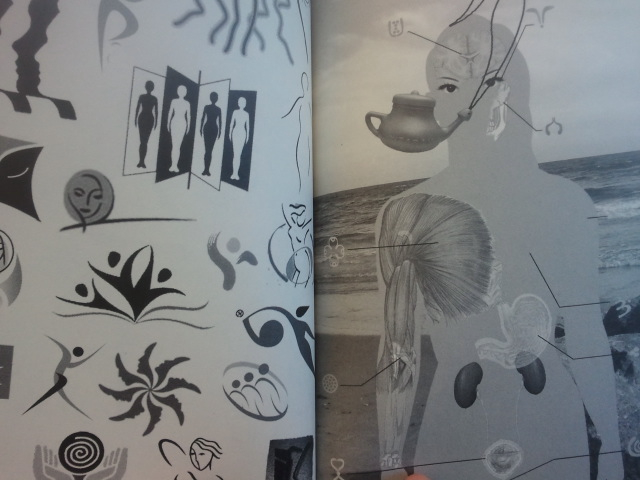 „Shana Moulton’s collection of found and altered images, The Blazing Fireplace of Guardianship, is the Winter 2012 edition of the Content series. This is a tender and enigmatic assemblage almost entirely devoid of words, which reads like a challenging and hysterical existential essay, an empathic exploration of modern spiritualism, a cynical contextual analysis of the marketing of the new age, a personal memoir, a mockery of a certain trend towards neo-mysticism in modern art or a map through “the decadent maze of spiritual liberation.”
Eighty pages of black and white images, sometimes adorned with a doodle or bit of text, a bit of collaging, but mostly left untouched, are brought together in this visual essay to create a beautiful, humorous and ruminative consideration of how we understand spiritualism. What we buy or find or do or take to help us understand or “get at” this thing called spiritualism.
Those familiar with Shana Moulton’s video and performance work (which Adam wrote about here) will recognize some of her visual elements and conceptual tropes, as well as the delicate balance between humor and reverence. It is intellectually and emotionally disarming; rave culture, the omnipresence of hands, waterfalls, and Jonathan Livingston Seagull all figure into her autobiographical (and/or universal) symbology. Through Moulton’s lens a piece of chemical sated plastic for removing blackheads from a person’s nose takes on an existential and romantic power as a symbol of potential psychic freedom, a giver of mystical qualities or a carpet ride to a spiritual journey; an ad for restless leg syndrome is transformed into an out of body experience. It is this poetic mastery—this ability to transform the banal into the worshipful, the silly into the sublime and back again–and a “sincere heart” which enables her to juggle such objects and images without slipping into the cruelty of mockery or the maudlin proselytism of the unquestioning believer." - Stephanie Barber "Whispering Pines 10 is an opera written by Shana Moulton and Nick Hallett, performed in a multimedia environment of 3-channel video incorporating interactive "live animation" techniques, hacked objects, and original electronic music. In what is essentially an extended, live episode of Shana Moulton's eponymous video serial, the narrative of Whispering Pines 10 focuses on the daily routine of a reclusive hypochondriac named Cynthia, Moulton's alter ego and sole protagonist of the work. Cynthia's reality is a sequence of private moments in which she seeks health and total happiness within her virtual home–represented by a "set" of multiple, interactive video projections–but ultimately settles for fad cures and new age kitsch, creating situations in turn comic, contemplative, and surreal. The mundane objects in Cynthia's possession act as portals into her own overactive subconscious, wherein hallucinatory sequences explore the nature of material and spiritual concerns in contemporary culture."

"Shana Moulton doesn't seem to be feeling well. Her wrists and neck ache from too much time on the computer. Her migraines are so painful she vomits on the floor. In fact she feels awful„anxious and depressed„spending days in bed or on her couch, obsessively kneading a fluorescent stress-pillow.
In the video series Whispering Pines, Moulton chronicles her desperate quest for relief from physical pain and negative thoughts. Through six hysterical episodes, Moulton turns to the promise, and products, of new age spirituality„ trying everything to find a sense of peace and well-being. She buys a plug-in waterfall. She gets reflexology. She reads The Feeling Good Handbook, fantasizing about the book's creepy author, Dr. David Burns. Wearing a neck brace, she even stiffly follows the moves of "Positive Moves," an exercise tape touting the physical benefits of a cheerful state of mind.
Moulton does find a few brief, though unexpected moments of comfort. Her electric blanket springs to life and embraces her. She drinks a batch of Crystal Light, to a trippy, Alice in Wonderland-like effect. Each episode synthesizes performance art and animation, brilliantly achieved with low-fi video effects. Electric-blue tears zigzag down Moulton's face as she cries in frustration. Robotic voices and a mystical Pegasus come into, and then spin out of the frame. Hot pink and teal furniture dresses the set, mostly confined to her apartment. Appearing frumpier than her 30 years, Moulton mopes around her surreal sanctuary in a terrycloth housecoat, with no apparent plan to venture out.
Yet, an Internet portal gives Moulton outside hope. A Google search directs her to "Healing Hands," a new-age retreat in California run by Lady Nova, whom Moulton meets in a garden adorned with windsocks and dozens of plastic hands. The treatment Moulton receives is less alternative medicine and more make-believe, but she finally feels great. With her face painted like a butterfly„and newfound gratification„she tears off her clothing and runs into the woods, where her body joins with nature, dissolving into a hallucinatory kaleidoscope of spiraling rainbows. She stretches and spins her arms furiously, performing something like yoga but closer to "Global Groove," and with exhausted, wide-eyed release, she collapses onto the grass.
Between its streams of synthesized music and therapeutic products, Moulton's work could be seen simply as a send-up of spiritual salvation. Her videos are hilarious, largely due to her awkward, self-effacing and uninhibited performances, yet her candor lifts it above the merely comedic. Her crazy and embarrassing sashay through the woods is genuinely amazing„she casts off composure, dignity and reason to risk real vulnerability. It's sweet and almost bewildering, notably different from the brash and impenetrable psychedelia of Pipilotti Rist. And it's refreshingly far from the current trend of coolly referencing hippie utopia, by making, for example, dream-catcher sculptures "about" transcendence. As goofy and pathetic as her spiritual quests are, and as far-out as they trip into the After Effects cosmos, Moulton is not so much trying for transcendence as for the less-fashionable path to sincerity and self-acceptance.
Ultimately, the physical world proves too much for Moulton„as electric stimuli repeatedly disturb any serenity, her grip on reality slips. Her constructions are so stimulating, however, that they skillfully and purposefully distract from her darker themes of isolation and uncertainty. But when therapy and spirituality unmistakably fail to bring lasting peace, Moulton is left to create for herself an elementary lesson in idealism. In a pivotal departure, through a beautiful animation drawn like an old educational film, the painted butterfly lifts off her face and floats into a watery field. The butterfly blinks and hovers, leaving behind Moulton's body and the clutter of the material world. It flutters over starfish, seashells and pine trees, searching for perfection, but settles on these natural forms of balance and stability." - Jen Schwarting 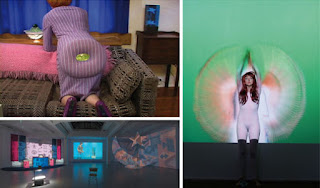 Shana Moulton, The Mountain Where Everything is Upside Down (2008) Duration: 4:49

"Video artist Shana Moulton's The Mountain Where Everything Is Upside Down is even better, immersing the viewer in a hallucinatory workout room where the artist's alter-ego„a hypochondriac named Cynthia„achieves ecstatic rapture after trepanning her skull with a magic crystal. As she often does, Moulton scrambles the lexicons of new age spirituality with fitness and beauty fads to comment on mankind's desperate need to put its faith in something. Of course, these shorts„garishly colorful, freewheeling in their use of disparate cultural signifiers„succeed on the level of spectacle. Much of the work here strives for more than flashy visuals, but, in this case, that flash feels very substantial." 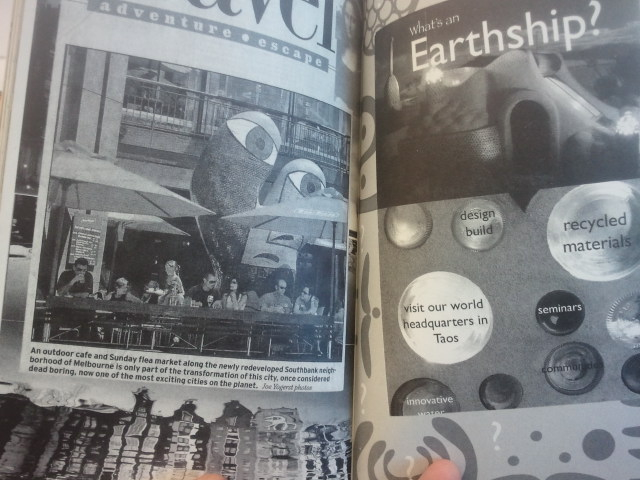 The Object Whisperer: Shana Moulton's Whispering Pines
at May 24, 2012
Email ThisBlogThis!Share to TwitterShare to FacebookShare to Pinterest