A Thousand Forests in One Acorn: An Anthology of Spanish-Language Fiction - brings together twenty-eight of the most important Spanish-language writers of the twentieth century 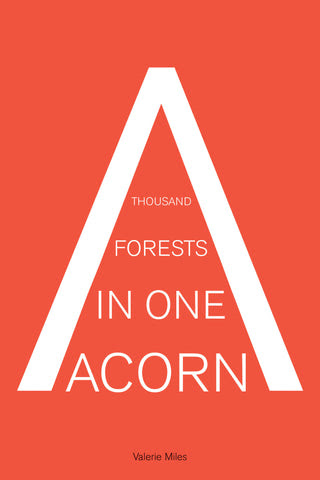 A Thousand Forests in One Acorn: An Anthology of Spanish-Language Fiction, Valerie Miles, ed., Open Letters, 2015.


A Thousand Forests in One Acorn: An Anthology of Spanish-Language Fiction brings together twenty-eight of the most important Spanish-language writers of the twentieth century—several of which will be familiar to English-language readers, like Carlos Fuentes, Javier Marías, and Mario Vargas Llosa, and many who will be new revelations, such as Aurora Venturini, Sergio Pitol, and Elvio Gandolfo—and provides them with a chance to discuss their careers and explain the aesthetic influences behind the pieces they chose to include in this volume. Unlike other anthologies, the stories and excerpts collected here were selected by the authors themselves and represent the “high point” of their writing career.
Valerie Miles—translator, editor, and co-founder of Granta en español—not only curated perhaps the greatest cross-section of contemporary Spanish-language literature to be anthologized, but also brings to this collection original interviews with every author, along with biographic prefaces before each, in order to best introduce the reader to the author’s entire oeuvre and his or her literary impact.
Breathtaking in scope and historical detail, this anthology will no doubt become a fixture in personal literary collections, as well as a go-to resource for classrooms and libraries alike.

One breezy August afternoon in the village of Cashiers, North Carolina, I accompanied my mother to the local library. Despite a population of some 200 souls, the library is impressive and well-sponsored by the families who spend their summers in the mountains. They had received donations of estate books as part of the civic tradition of raising funds for community projects and we went to browse through what was available. A book edited by Whit Burnett—idea by John Pen—caught my eye, titled This is My Best. Over 150 self-chosen and complete masterpieces, and the reasons for their selection. As I flipped through the pages, I began to realize what an extraordinary piece of literary history it was. Published by Dial Press in 1942, the editor had asked the influential writers of the time to “edit their entire lifetime output to select the one unit which in their own, uninfluenced opinion represents their best creative moment. A book composed over many years, the focusing of many lifetime viewpoints, a public revelation of the private opinions of our best authors on how they look upon themselves, and what, in their writings, they most value.”
[. . .]
Ralph Waldo Emerson wrote in his essay on History that there is one mind common to all individual men and therefore the whole of history exists in one man, all of history lies folded into a single individual experience. “The creation of a thousand forests is in one acorn.” He also wrote that “The fact narrated must correspond to something in me to be credible or intelligible. As we read, we must become Greeks, Romans, Turks, priest and king, martyr and executioner, must fasten these images to some reality in our secret experience.” A little bit like taking a walk through Baudelaire’s forest of symbols that nod to all men in understanding.
As an American who has spent half a life in Spain working in publishing, I had long specialized in providing authors in translation for a Spanish language audience. So I found the idea of putting together a Spanish language version of this anthology a fascinating proposal for a literary adventure through some of the most celebrated writing in the language during the second half of the 20th century. To root out the acorn, the kernel, the driving obsession of a writer, of knowing what he or she, in the quiet of their study, considers the best representation of that obsession. To listen to the individual voices and fasten the images to some reality in my secret experience, walk among the nodding symbols; to be a lonely child growing up in Peru, a young man in Madrid whose lover dies in bed before they can consummate the act, a painter in Tahiti who finds inspiration on a stormy night or a mother who chooses power over love for her son’s future in a world of magical creatures. Perhaps, by living out these secret experiences, I might discover some occult map of the forest by its trees.
A Thousand Forests in One Acorn is much less ambitious in size and scope than Whit Burnett’s original. I suppose it is fitting for the new century and much could be and is being written on the current state of attention spans. Here there are 28 writers and they are all narrators of fiction. It’s worth noting that should in no way be considered a canon, not even a personal one, but simply a selection of some of the important writers of the 20th century who have been awarded prizes and widely acclaimed and celebrated in their countries. Space would never allow me to include all the writers whose work I admire and there are writers who would be considered more or less canonical who are not here, many of whom were invited but who were not able to participate—Gabriel García Márquez, Fernando del Paso, Fernando Vallejo, César Aira, José Emilio Pacheco and William Opsina, among others. Sadly, others were invited whom we have lost before the process could begin, namely Guillermo Cabrera Infante and Daniel Sada. The late Carlos Fuentes was one of the last writers with whom I had the opportunity to work, his words having now passed into literary history.
[. . .]
Organized chronologically by age beginning with the Argentine writer Aurora Ventur-ini, who received a prize from Borges as a girl and from young readers just recently, the anthology gathers the work of some of the best writers in the Spanish language of the second half of the 20th century. The youngest writer included, Evelio Rosero, was born in 1953. The premise is that the younger the writer, the more difficult it is to think that they have already written their best pages. If the anthology is to comply with a function of being an historical document, at least the bulk of the writers should be able to choose something that might be considered the best writing of their entire career.


I don’t review a lot of anthologies on this site, but when one like A Thousand Forests in One Acorn (2014; excerpts translated from the Spanish by many (see below)) comes around, I really cannot wait to introduce others to it. Subtitled An Anthology of Spanish-Language Fiction, this 715-page book is the product of four years of work, particularly on the part of its editor, Valerie Miles. Time well spent, I say.
In her prologue, Miles tells of going to a local library with her mother some years ago. There she found “an extraordinary piece of literary history”: Whit Burnett’s 1942 anthology This Is My Best: Over 150 Self-Chosen and Complete Masterpieces, Together with Their Reasons for Their Selection, featuring work by William Faulkner, Pearl Buck, Sinclair Lewis, Ernest Hemingway, Willa Cather, Theodore Dreiser, Wallace Stevens, Langston Hughes, among many others. In this book, these writers selected their favorite pieces of their own writing and explained why they felt that way. Miles carried this valuable resource and piece of history around for years, many of which have been spent in Spain experiencing and promoting Spanish-language fiction. One day, she decided to take the premise of This Is My Best and apply it to her beloved corner of the literary world.
Not quite as ambitious as the English-language predecessor, A Thousand Forests in One Acorn highlights 28 authors (and Miles notes that readers should not consider this a canon, “not even a personal one,” as several authors, for several reasons, were unable to participate). I’m thrilled with what we do have here, especially since many of the authors are relatively unknown in the English-speaking world — some have not even been translated before! There are a lot of new perspectives to explore here.
The book is set up in this way.
First, Miles has written a biographical preface to each authors section (beginning with the oldest author in the group and going to the youngest — I’ll list them all below).
Second, each author answers questions based on three different themes: “The Torture of Doctor Johnson,” in which the author is asked what his or her selected piece is and why they chose it; “In Conversation with the Dead,” in which the author discusses influences and traditions and friends that have affected their work; then “Coda” digs into some of the authors’ peculiarities, which are not always limited to their literary work but can, for example, move to their political careers, as with Mario Vargas Llosa.
Third, we get the selection, often an excerpt (or two — or four) from one of the author’s novels. While excerpts often annoy me, here they served their purpose, allowing the author to examine what they consider to be the best few pages of their work.
Lastly, each section ends with a list of the author’s work in Spanish, a list of their English translations (as I mentioned above, often few, as in the case of Alfredo Bryce Echenique, who has been publishing regularly since 1968 and yet has only two English translations to his name, and sometimes nonexistent, as is the case with Cristina Fernández Cubas, who has been publishing regularly since 1980), and a list of awards and recognitions.
It’s a great book, one I’ve been carrying around for a few months, now, and that I’ve loved diving into. - Trevor Berrett


Miles compiles an impressive anthology of Spanish-language authors' self-submissions. The result, titled after an Emerson quote, is less of a definitive canon than an attempt to "root out the acorn, […] the driving obsession of a writer." Nevertheless, the 28 participating fiction writers represent some of the best of their respective literatures: including Carlos Fuentes (Mexican), Aurora Venturini (Argentinian), Mario Vargas Llosa (Peruvian), and Ramiro Pinilla (Spanish), among many others. Each section consists of a short biography (conveniently marked off by inked page edges), an interview, a selection of the author's choosing, and finally a bibliography of works and awards. Almost all of the selections are literary works of rare, remarkable quality, but the real pleasure is reading them in the context of the interviews. Here, authors explain their submission choice (Alberto Ruy Sánchez calls it "the pain of choosing"); they recount influences (Faulkner makes frequent appearances, as do family members—says Fuentes, "[W]rite […] for your grandmothers wherever they are"); and they discuss everything from writing techniques to fiction's "obligation" to politics. Ordered chronologically by authors' dates of birth, the collection begins with the rich works of the most mature authors, and ends slightly less impressively with younger authors who, though worthwhile, may have yet to write their best pages. With its myriad themes, including class conflict (Esther Tusquets), disillusionment with utopian ideals (Juan Marsé), and instability of identity (Antonio Muñoz Molina), the collection amply rewards both the casual reader and the scholar seeking insight into authors' thought processes. - Publishers Weekly

at October 01, 2015
Email ThisBlogThis!Share to TwitterShare to FacebookShare to Pinterest