Irena Haiduk - The Divine can imagine things that The Human cannot imagine. It is in this space that Irena Haiduk’s work lives its perpetually challenged life: where that which we cannot imagine gets imagined. This art is a magnet that extracts psychic metal. 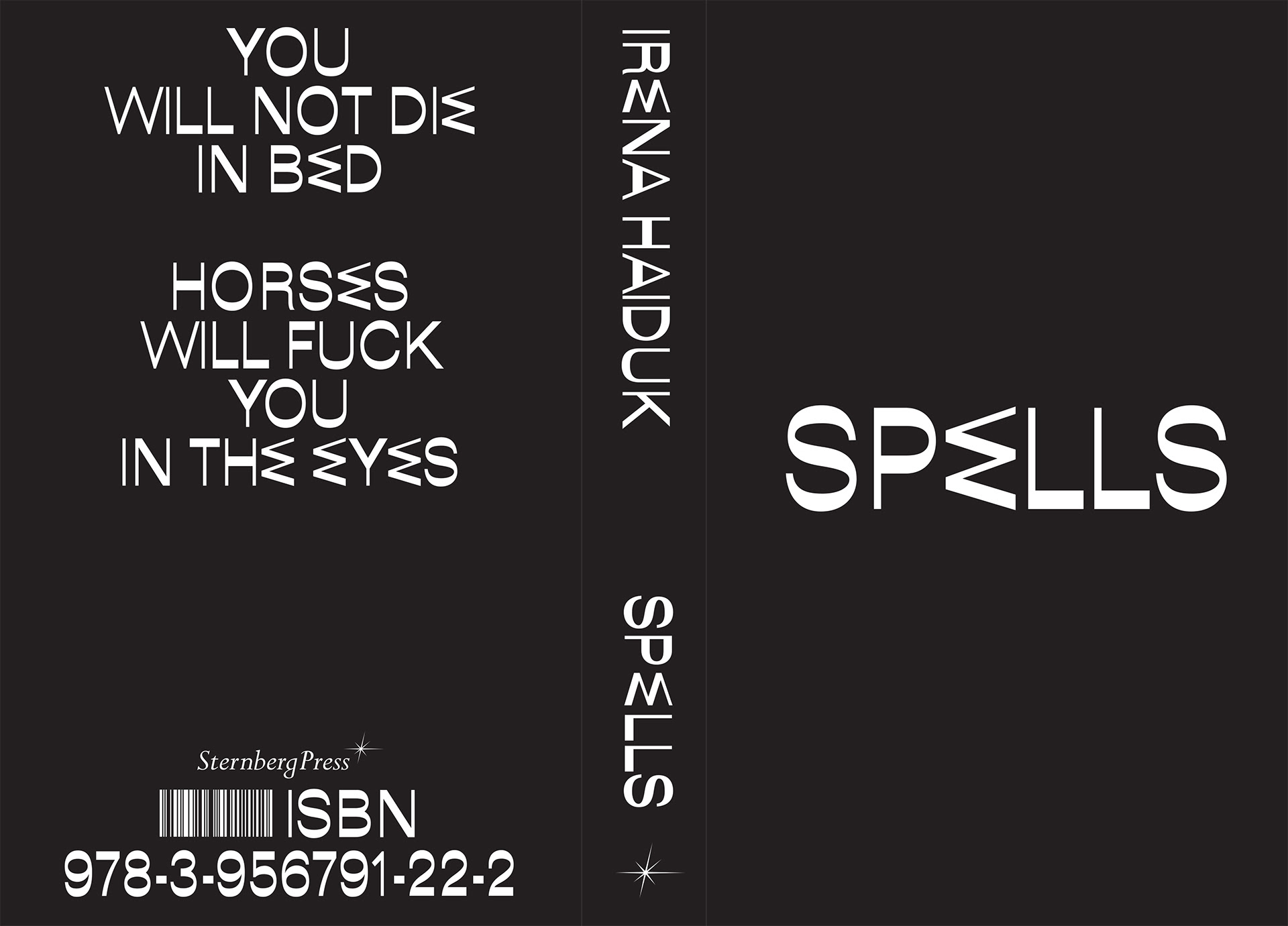 What is Human? What is Divine? The Divine not only can do things that The Human cannot imagine, The Divine can imagine things that The Human cannot imagine. It is in this space that Irena Haiduk’s work lives its perpetually challenged life: where that which we cannot imagine gets imagined. This art is a magnet that extracts psychic metal.—From the introduction
Spells is the first collection of Irena Haiduk’s writing, gathering her texts and limited-edition publications since 2007. Moving through a wide range of formats, the book encompasses manifestos, music scores, forecasts, conversions, translations, architectural programs, and other difficult-to-categorize works. With sharp teeth and a killer instinct, Haiduk leads the way to a sunny spot where every soul suffers infinite injustice.


The following texts orbit  SEDUCTIVE EXACTING REALISM. They can be read individually, but together they really cook.

"To the West: When you say that we are a cultured people, you actually mean that we understand the subtleties and complexities of your culture. You mean that we should dream your dreams, since you do not have or acknowledge any others, but that we should live our own lives, since we cannot have yours."
(From Ivo Andric's Black Notebook, Belgrade,1948) 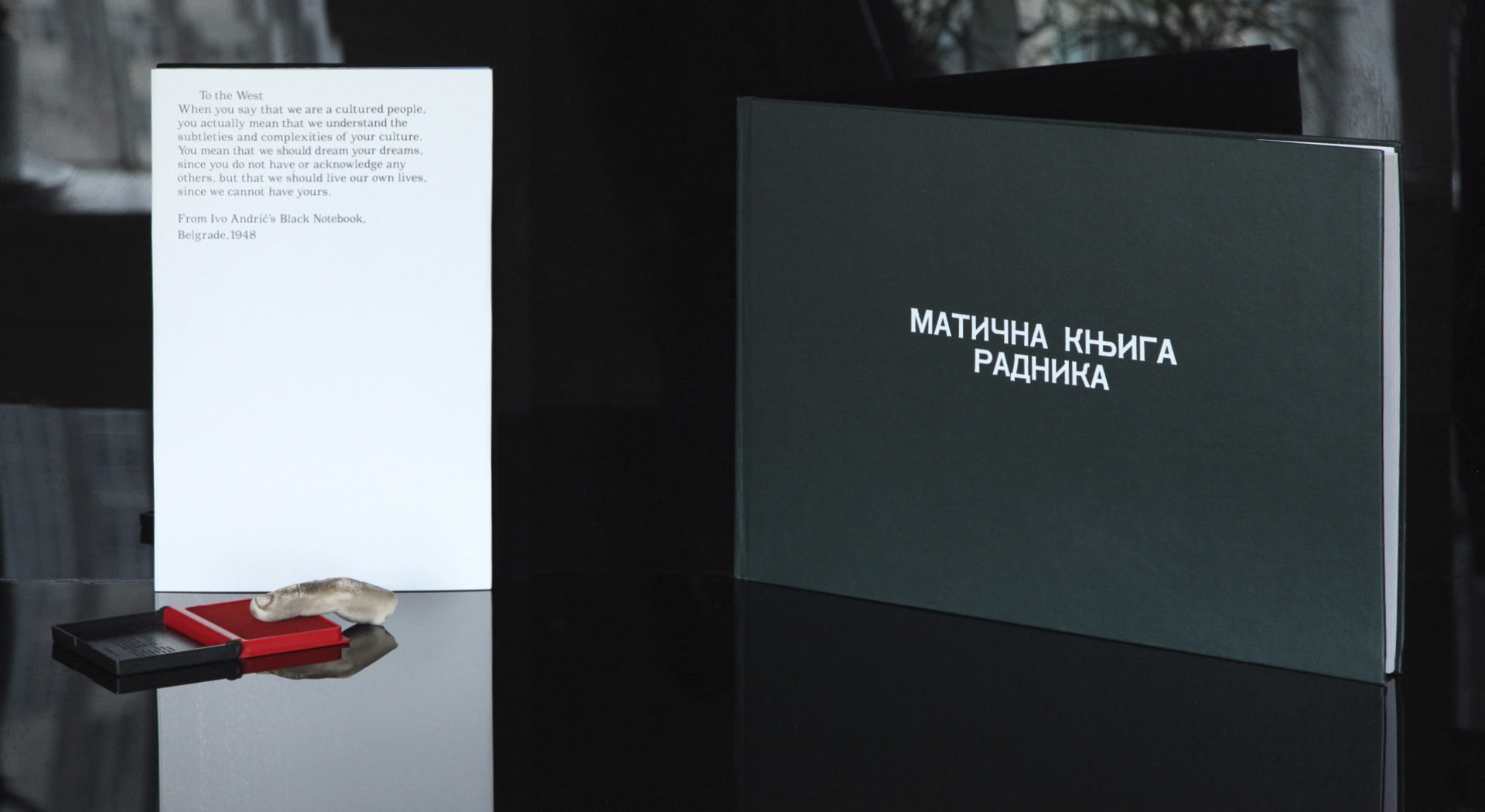 The Borosana shoe was first developed over a nine-year period (1960-69) at Borovo Rubber Industry Headquarters in Vukovar, Yugoslavia. After being designed and tested by the Borovo female workforce and an orthopedic surgeon, the shoe was mandatory for Yugoslav women working in the public sector. Borosana was launched in 1969, in white and navy colors, featuring an ergonomic platform, calculated as ideal for nine hours of standing without hurting the wearer’s spine. In the declining years of Yugoslav communism the model was withdrawn from mass production. Fabrication was abandoned when Vukovar became a war zone in 1991.

Each time this project is exhibited Borosana becomes the official work shoe of the host institution advancing the constructivist maxim of great utilitarian design in service of the working woman. The shoe extends the architecture of labor and provides the wearers with a distinction between labor time and leisure time. Borovo remains the last public Yugoslav infrastructure. The inability to legally split and privatize the company’s public assets prevents Yugoslavia from fully formally splitting to this day. With every new step Yugoslavia persists (insists). 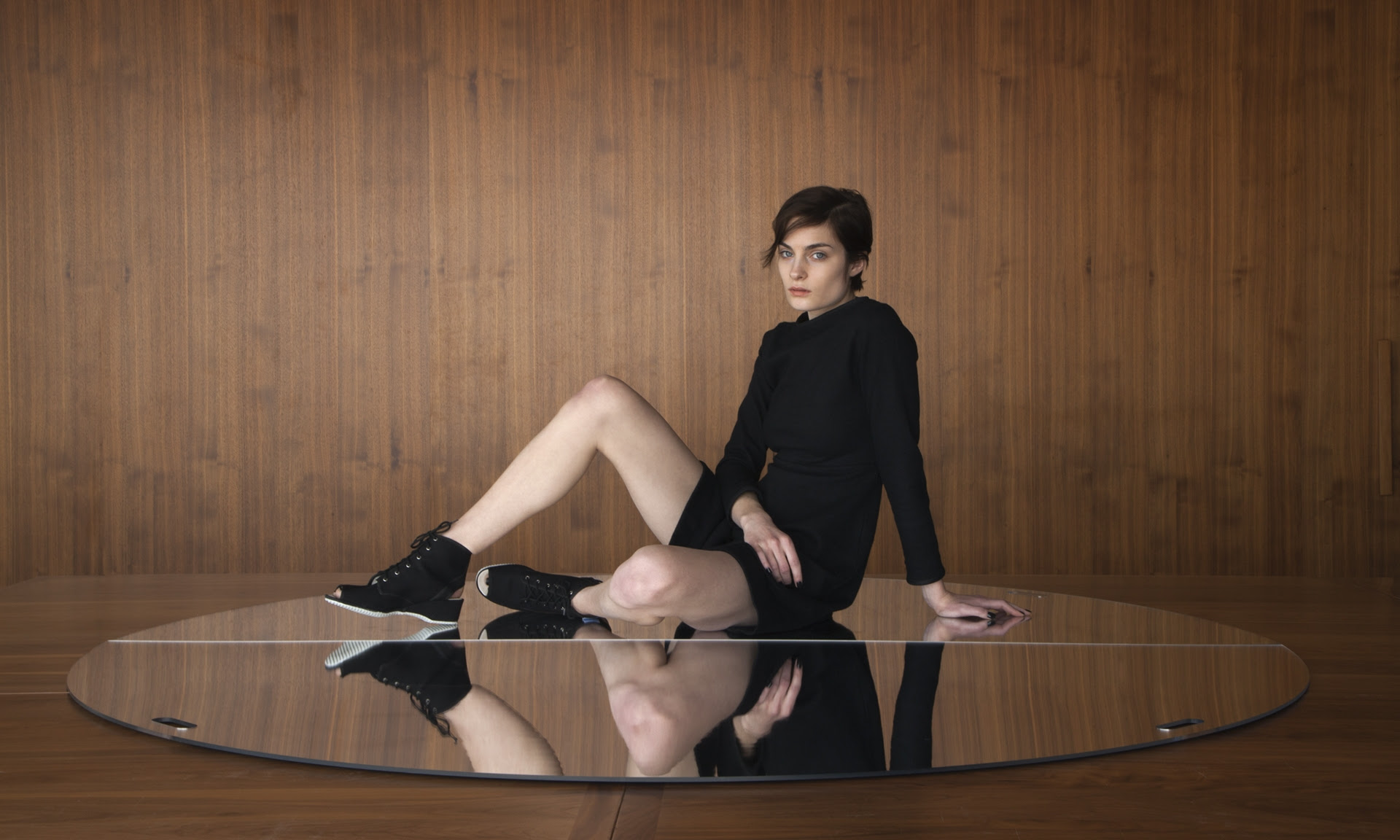 "After I am finished, I dig out the eyes, cut off the nose, the tongue; I break the fingers, legs, arms, and lastly, I gut. I set the body aside to cool down. Then, I pause. I start thinking about the mortal carcass. What did he think a moment ago, yesterday, last year? Did he want me to forgive him or ease his well-deserved suffering? I imagine him in various stages of life and in everyday situations. I cover him in salt, wrap him in rags, drain the fat and press him, gradually and carefully, to avoid breaking any bones, extracting all the blood left in the meat. Next, I wash him repeatedly to remove the salt, hook and hang him in a dark, well-ventilated room. The surrounding air is paramount to the final quality of the prosciutto. I wait patiently. After he is completely dry, I slice and eat him."

A dossier and translation of Jedenje Bogova (When Gods Eat Themselves), the disputed diary of the chief officer at the WWII concentration camp Jasenovac. Published independently in Yugoslavia by Goran Cuckovic in 1983, this book was reprinted five times and became highly sought after in the mid 1980s. In 1995, some of the quotes from this text were printed on Serbian paramilitary banners in Srebrenica. Translated and augmented by Irena Haiduk on the occasion of the exhibition “Night of the World” (2013), this text was integrated into a group of related works. 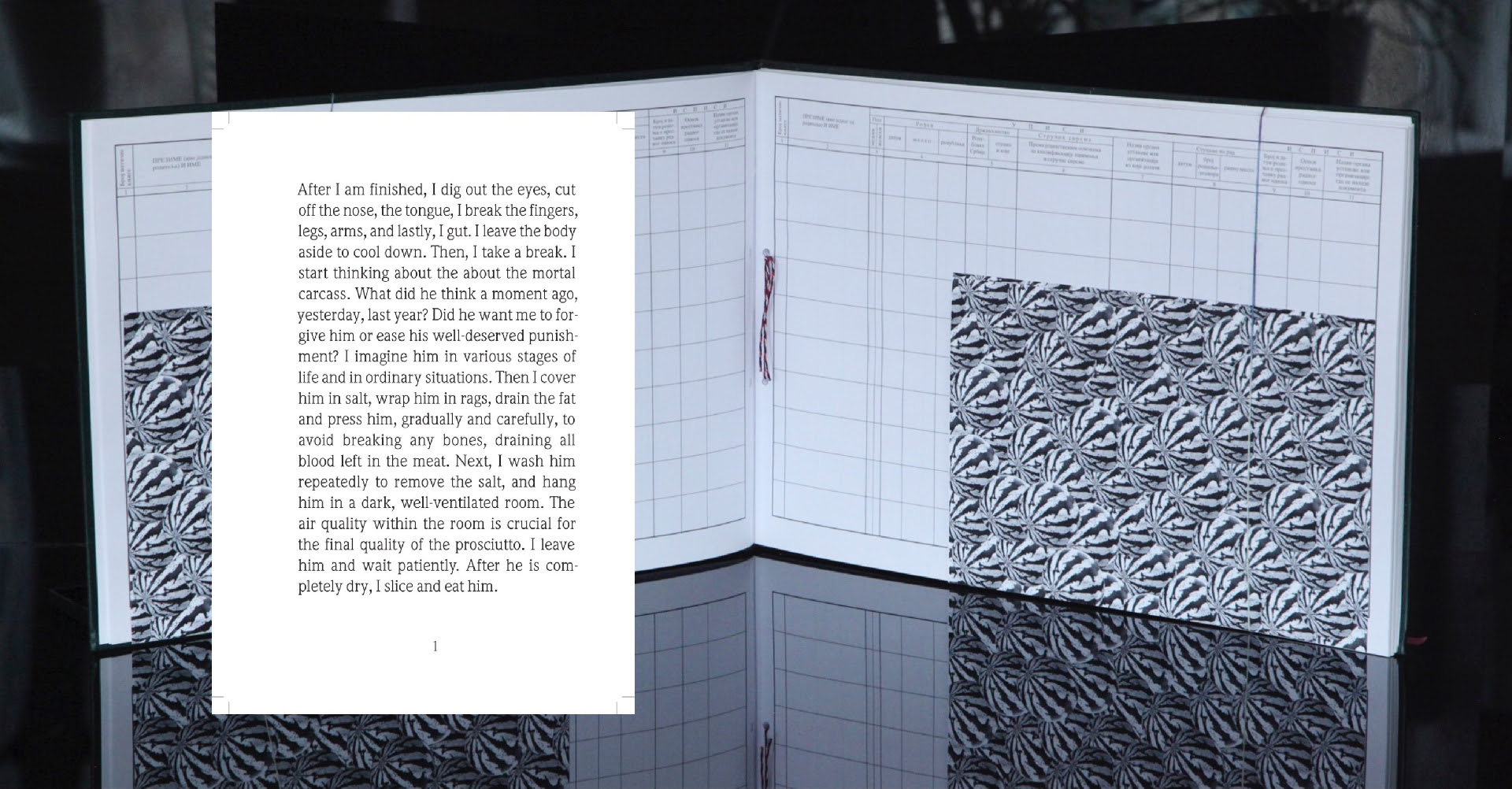 A shipwreck anthem dedicated to the SS Patria II, which carried the International Congress of Modern Architecture from Marseille to Athens and back in the Summer of 1933. The performance of this song inaugurated the The Gesture Guild (2010), an occult consultancy preparing visitors for the moment when factory wages equalize in the First and Third Worlds.

The Dark Departments have joined forces in forming the Gesture Guild, a bureau for the recovery and acquisition of voluntary gestures. The public, afflicted with recession-based involuntary movement due to the loss of solid surfaces and time-space incongruity, can join garment manufacturing programs in search of preparation techniques for wage equalisation. 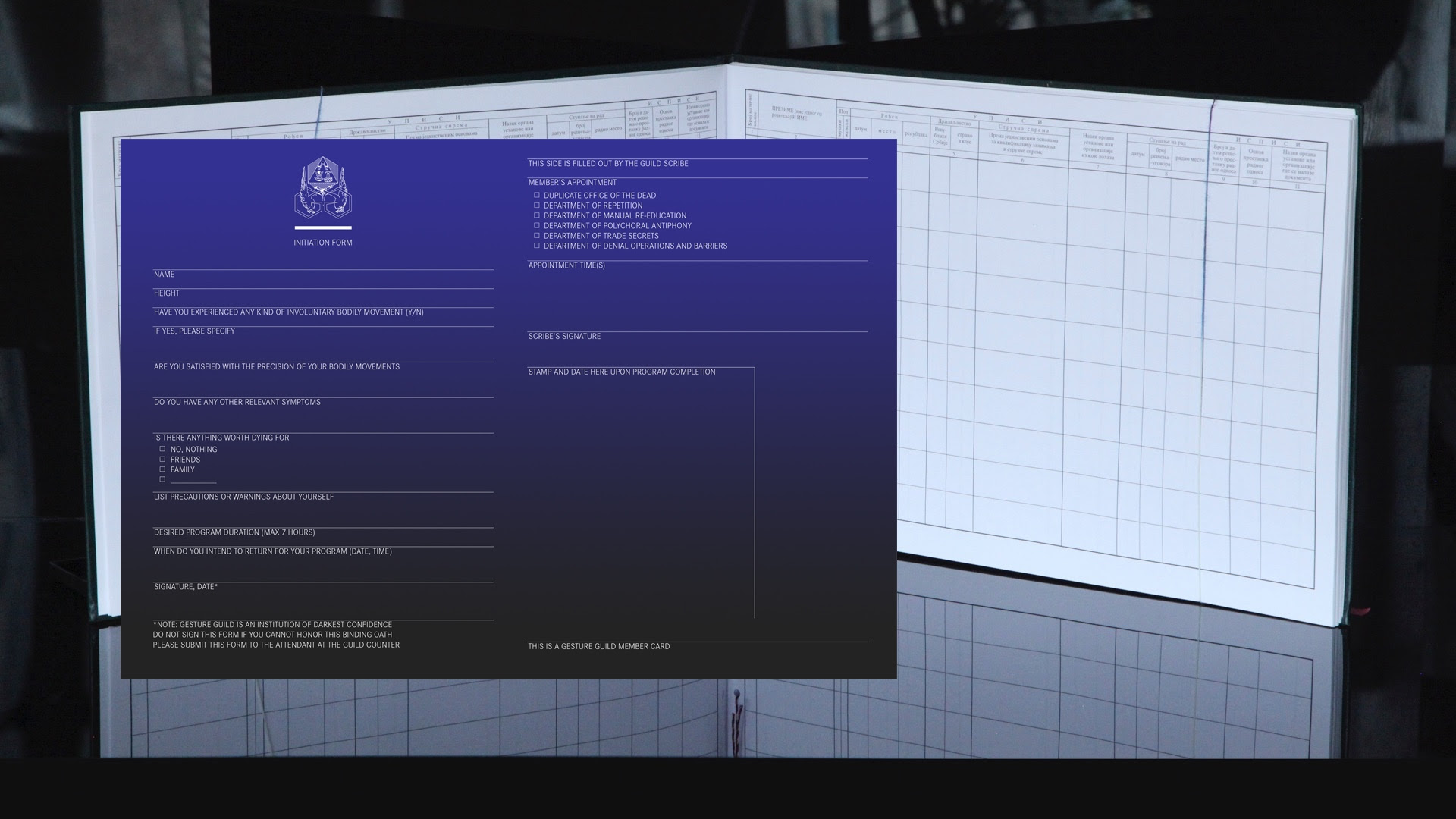 This index is a Swiss Weltformat-size archive of narratives telling the deaths of the great white men of Minimalism and Conceptual art, in the guise of ongoing Serbian narco-mafia assassinations and retaliations.

The texts create a tabloid killing spree/gang war, unfolding before and shortly after the artists’ arrival in Switzerland for the opening of the first major international survey of Conceptual art, “Live In Your Head: When Attitudes Become Form,” curated by Harald Szeemann for Kunsthalle Bern in 1969. 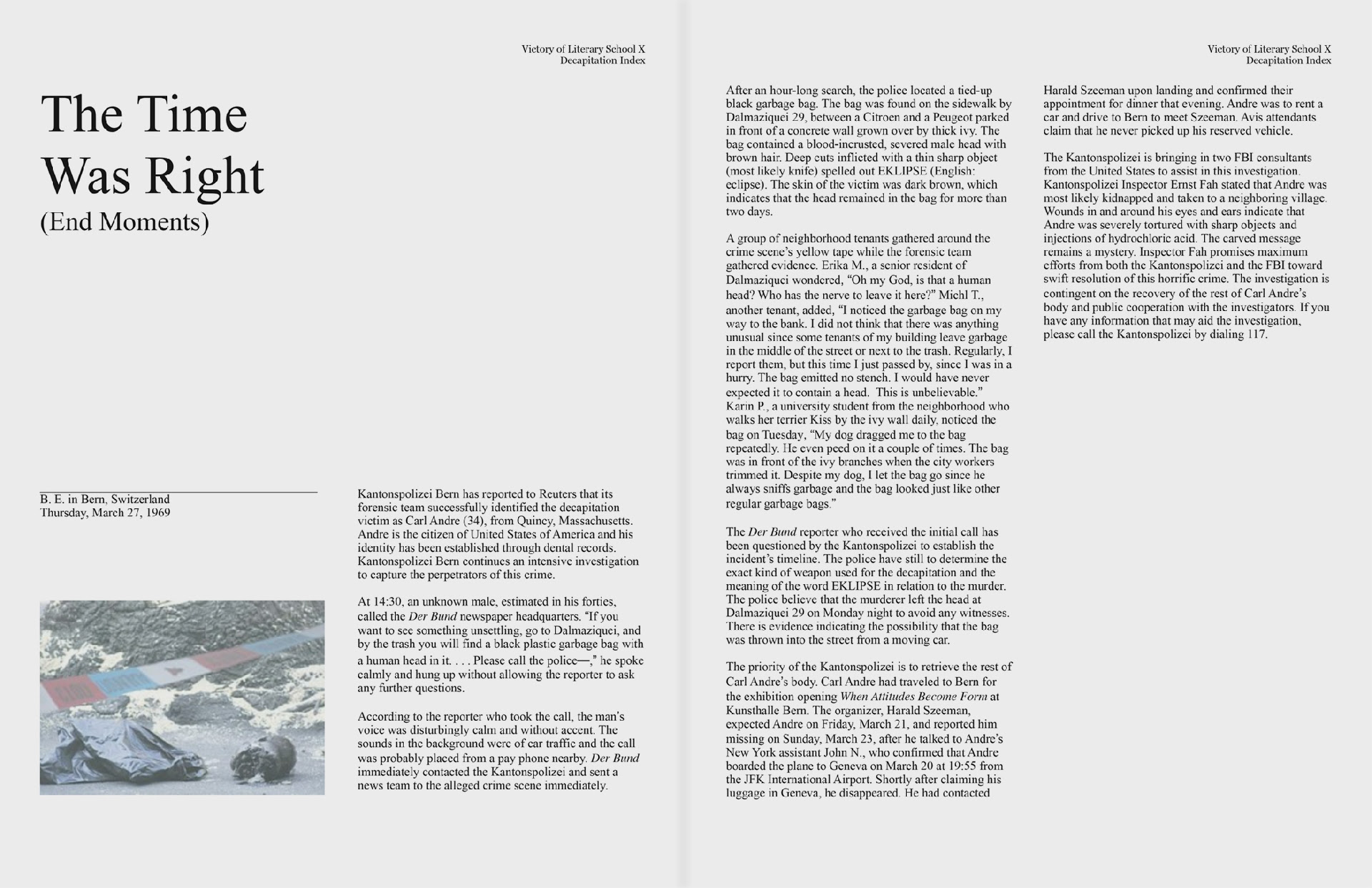 Double LP cover for the sludge band, the Melvins.

The design was etched into a black aluminium leaf and effected by a pile of amplifiers during the band's performance at Blum and Poe, Los Angeles. The aluminium sheet was crumpled by the force of the sound itself and kicked by the band members during the performance. The result was scanned for an LP cover with the following track names: BRAIN, BLOOD, BLOOMS. 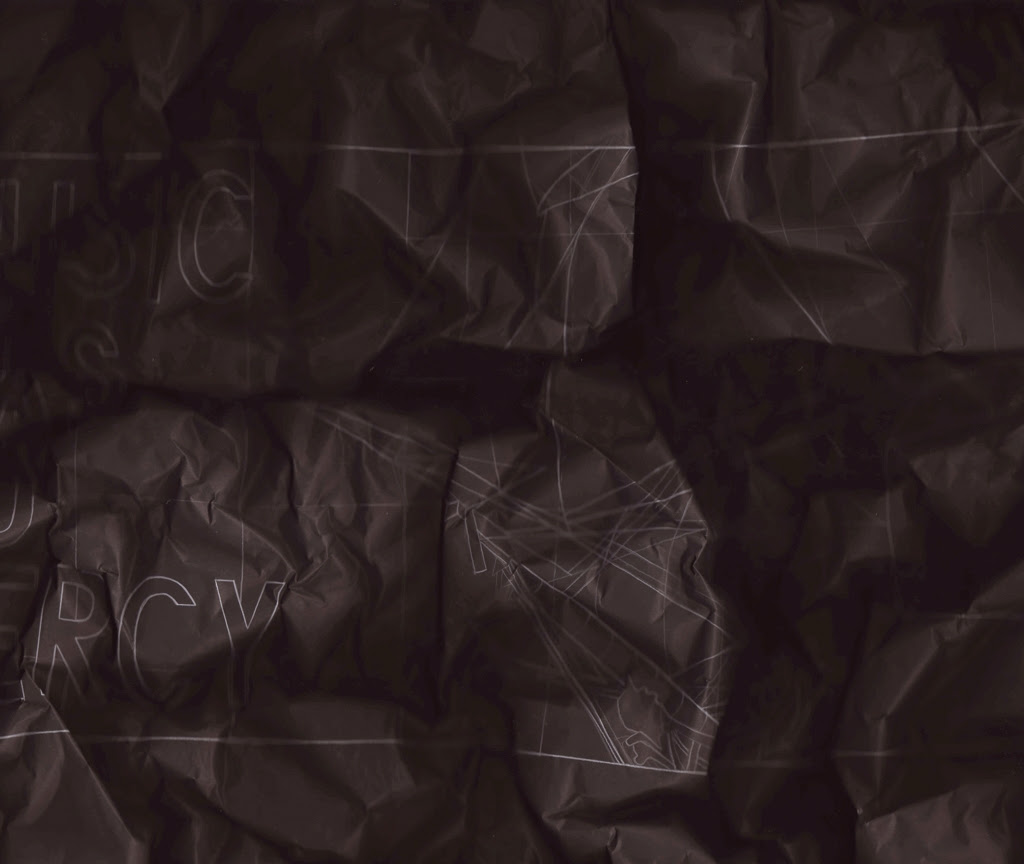 Music for miners and workers under ground.

Designed to test the limits of the french horn instrument, this score can be performed only by Giovanni Punto, Dennis Brain and Barry Tuckwell in its entirety. Since it requires two resurrections (Brain and Punto) Diaboliad stipulates a Satanic pact. The original score is printed with inkjet ash and each time it is touched, it smears, staining the hands of the reader black.