Abel Posse - With a crew of prostitutes, representatives of multinationals, priests, a bull-fighter and his bull, a rabbi, Swedenborg the theologian, a prototype of Karl Marx, peasants, and Nietzsche looking for proof that God is dead, Columbus sets sail for paradise 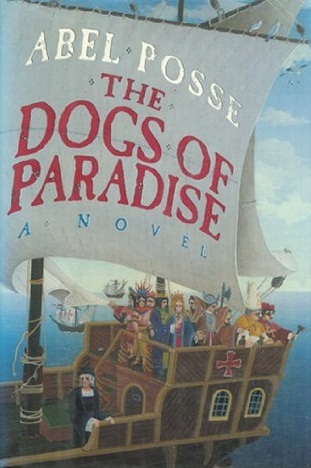 
Brilliant, profound and startlingly comic, here is a transformation of the old stories about the discovery of the Americas by distinguished Argentinian author Abel Posse. Ranging from the decadent Spanish court to the shores of the Mediterranean to the tropical Earthly Paradise, the Admiral of the Ocean Sea triumphantly finds the New World.
The medieval Spanish state and the New World in the early years of its discovery by Europeans are the backdrops for a revisionist historical farce that will be best appreciated by those already familiar with the personalities and events of the period. The disjointed narrative renders with Rabelaisian gusto (and, frequently, crudity) several settings: Aztec and Inca societies; the passionate, cruel court of Isabella and Ferdinand; the lonely wanderings of Christopher Columbus as he moves toward his fateful mission of finding Earthly Paradise. Posse, a former member of the Argentinian diplomatic corps whose previous novels have been published in Latin America, employs the fashionable technique of viewing history through a decidedly 20th-century lens (a character's body is described as "Picassoesque") to offer some provocative insights into these icons of Spanish history, but the overheated machismo permeating the novel may annoy some. Nevertheless, this is a worthwhile addition to the bookshelves of Latin American literature aficionados.
Christopher Columbus is the central character in this provocative novel by Argentinian author Posse. He presents the epic voyage of 1492 as a danse macabre, a lethal meeting of cultures that results in torture and death for the natives of the New World. Ferdinand and Isabella give a Spanish preview of fascist dictatorship to come while the Spanish Inquisition sets a grisly new standard for religious intolerance. Posse offers American readers a fresh chance to sample the astonishing creativity of Latin American writers. He blends the humor of Woody Allen and the dark images of Ingmar Bergman into a haunting account of man's inhumanity to man in the 15th century.


The medieval Spanish state and the New World in the early years of its discovery by Europeans are the backdrops for a revisionist historical farce that will be best appreciated by those already familiar with the personalities and events of the period. The disjointed narrative renders with Rabelaisian gusto (and, frequently, crudity) several settings: Aztec and Inca societies; the passionate, cruel court of Isabella and Ferdinand; the lonely wanderings of Christopher Columbus as he moves toward his fateful mission of finding Earthly Paradise. Posse, a former member of the Argentinian diplomatic corps whose previous novels have been published in Latin America, employs the fashionable technique of viewing history through a decidedly 20th-century lens (a character's body is described as ``Picassoesque'') to offer some provocative insights into these icons of Spanish history, but the overheated machismo permeating the novel may annoy some. Nevertheless, this is a worthwhile addition to the bookshelves of Latin American literature aficionados. - Publishers Weekly


Argentinian writer Posse, translated into English for the first time, joins those other Latin American writers who dazzle us with their verbal virtuosity, flair for magic realism, and incomparable interplay of the sacred and the profane. Mindful perhaps of that approaching half-millenium celebration, Posse makes Christopher Columbus the central character of the novel. But Posse's Columbus is a mystic, a sensual lover, and a utopian--not the usual crass fortune-seeker of the history books, though he is shrewd enough to play on other men's greed. Breaking with family tradition, he becomes a sailor, with a deep sense of kinship for the sea--his webbed feet are a sign of his amphibian nature. As a descendant of the prophet Isaiah, he also has a divine mission--to discover Paradise, from which man was expelled at the Fall. Convinced that it lies to the west, he prevails--after many setbacks and amorous adventures--to persuade beautiful Queen Isabella, who, according to Posse, is the lusty creator (along with her husband Ferdinand) of the great Spanish empire and the Renaissance, to provide the money. With a crew of prostitutes, representatives of multinationals, priests, a bull-fighter and his bull, a rabbi, Swedenborg the theologian, a prototype of Karl Marx, peasants, and Nietzsche looking for proof that God is dead, Columbus sets sail for paradise. For a brief while, Columbus and that motley but most symbolic crew--progenitors of the subsequent ills of both North and South America--enjoy their earthly paradise. Soon, however, the urge to act, to organize, to do--""the longest-continuing crime of doing in America""--takes over, and paradise is again lost. Bawdy, witty, and fast-paced, as well as serious and unobtrusively erudite, Posse's novel is an imaginative--and yet on its own terms convincing--insight into a man who really did change the world. A marvelous addition to the genre. - Kirkus Reviews

The Romulo Gallegos Prize, awarded periodically by the Venezuelan Government for distinguished achievement in Spanish-language fiction, has been pretty well on the mark since giving the initial honor in 1967 to Mario Vargas Llosa for ''The Green House.'' In due course, the prize was won by Gabriel Garcia Marquez for ''One Hundred Years of Solitude'' and Carlos Fuentes for ''Terra Nostra.'' These authors and their works are by now well known to the reading public. Other honorees, such as Fernando del Paso of Mexico, have had inexplicably bad luck in getting published here. In any case, ''The Dogs of Paradise,'' by the Argentine writer and diplomat Abel Posse, won the Gallegos Prize in 1987; here we have it in a splendid English version by Margaret Sayers Peden.
There is a resemblance among some of the works that have found favor with the Caracas committee, since they often reflect two parallel tendencies in contemporary Spanish-American fiction - the historicizing of fiction and the fictionalizing of history. The two phenomena are interdependent, but work with each other. Authors seem to delight in ''doing a number'' on archetypal fictional characters from the hoary past, and also to distort, whether for parodic or celebratory purposes, characters and situations from momentous historical epochs. Their common literary paternity might be variously traced to Jorge Luis Borges's translation of Virginia Woolf's ''Orlando,'' that spiffy burlesque of the pompous Victorian biography (much admired by Mr. Garcia Marquez), not to mention other put-ons such as Marcel Schwob's ''Vies Imaginaires,'' Borges's ''Universal History of Infamy'' and, on the other side of things, the metahistorical fictions of the Cuban writer Alejo Carpentier in ''The Kingdom of This World,'' with its resplendent Haitian setting.
Abel Posse has taken a different tack, with the Spanish language and the history of Spain and Spanish America. His compulsively imaginative weaving of fact and fiction gives a most instructive example of the consequences of just plain going over the top. His subject is appropriately grandiose, as befits a novel about the marriage of Fernando and Isabel - the forging of Hispanic political and spiritual unity, the conjugation of the visionary Columbus with the realpolitik practiced by the Spanish state, the catastrophic expulsion of the Jews and later the Moors from Spain, the four voyages of Columbus, the discovery and conquest of America, the temporary displeasure of Fernando (''He was sent in search of gold and daemons, and he comes to us with angels' feathers!''), the arrest of Columbus, his return to Spain in chains, his vindication by the belatedly grateful royal couple.
The chronology respects historical events; the readily recognizable dates go from 1461 to 1500 or thereabouts, and there is a cast of the usual suspects along with the above-named: Henry IV (The Impotent), Juana la Loca, Torquemada, Rodrigo de Borja (Borgia in Italian), otherwise known as Pope Alexander VI. But lest we think that ''The Dogs of Paradise'' might be an example of the tainted genre known as the ''historical novel,'' the author takes care to note at the beginning that ''this is a work of fiction. Names, characters, places, and incidents are either the product of the author's imagination or are used fictitiously.''
This does seem to be the case. No riffling through the Britannica, no historical dictionary will quite prepare the reader for this secularized vision of the events about to be ''celebrated'' in the year 1992. In Mr. Posse's delirious scheme, Columbus has wild cravings for kinky sex, while the battles on the marriage bed between Fernando and Isabel find horrific duplication in the other, more terrestrial geography under their combined command. In a telling passage, Mr. Posse gives us the basic idea: ''The kingdom was consolidating, gradually. Meanwhile, a secret, personal war was being waged parallel to the external one recorded by historians (history records only the grandiloquent, the visible, acts whose results are cathedrals and processions; that is why history composed for official consumption is so banal). The fact is that there was a struggle of enormous transcendency going on between Fernando and Isabel. A war of bodies and sexes that was the true foundation of the contemporary Western world, and its subsequent horrors.''

Advertisement
Continue reading the main story
Mr. Posse plays fast and loose with every fact at his command, as he has every right to do, since he is evolving a subterranean theory about the meaning of history in Spanish America between 1492 and 1986. He makes clever use of deliberate anachronism and violent telescoping of events - the four Columbus voyages, for instance, are conflated into one - and all are cast in a new genre we might call surrealist history.
At times, Abel Posse's portentous language seems to want to give imaginative invention a bad name - ''As the dawn of August 3rd, 1492, crept near, its rosy fingers unbuttoned the Jesuitical cassock of night. More than a day was dawning.'' I should say. One might quibble with the language, but the search for the terrestrial Eden is at the heart of Columbus's fictive mission, in Mr. Posse's view, and so Latin America and its somber history must be ''read'' as an impulse toward Utopia, still not brought to earth in the forms and social structures proper to the spirit of the continent. Up to now, it has been lorded over by ideological imports from somewhere else. As he said in a recent interview, ''Spanish America is like a great protoplasm, not at all yet defined and still seeking out its own form.''
The reader lays down ''The Dogs of Paradise'' with a strong but not especially favorable impression, left by verbal excess and page-by-page delirium. Decades ago, Alejo Carpentier declared his independence from the Surrealists who had guided his literary apprenticeship, and in so doing he complained about what he called their ''bureaucracy of the marvelous.'' Abel Posse has magical talents indeed, but one does wonder whether a reading of the implacable prestidigitation in ''The Dogs of Paradise'' - all 301 pages of it - might not elicit the same weary plaint from even the most benevolent reader today. - ALEXANDER COLEMAN
https://www.nytimes.com/1990/03/18/books/fernando-vs-isabel.html