Richard Huelsenbeck - his memoirs bring to life the concerns—intellectual, artistic, and political—of the individuals involved in the Dada movement and document the controversies within the movement and in response to it. 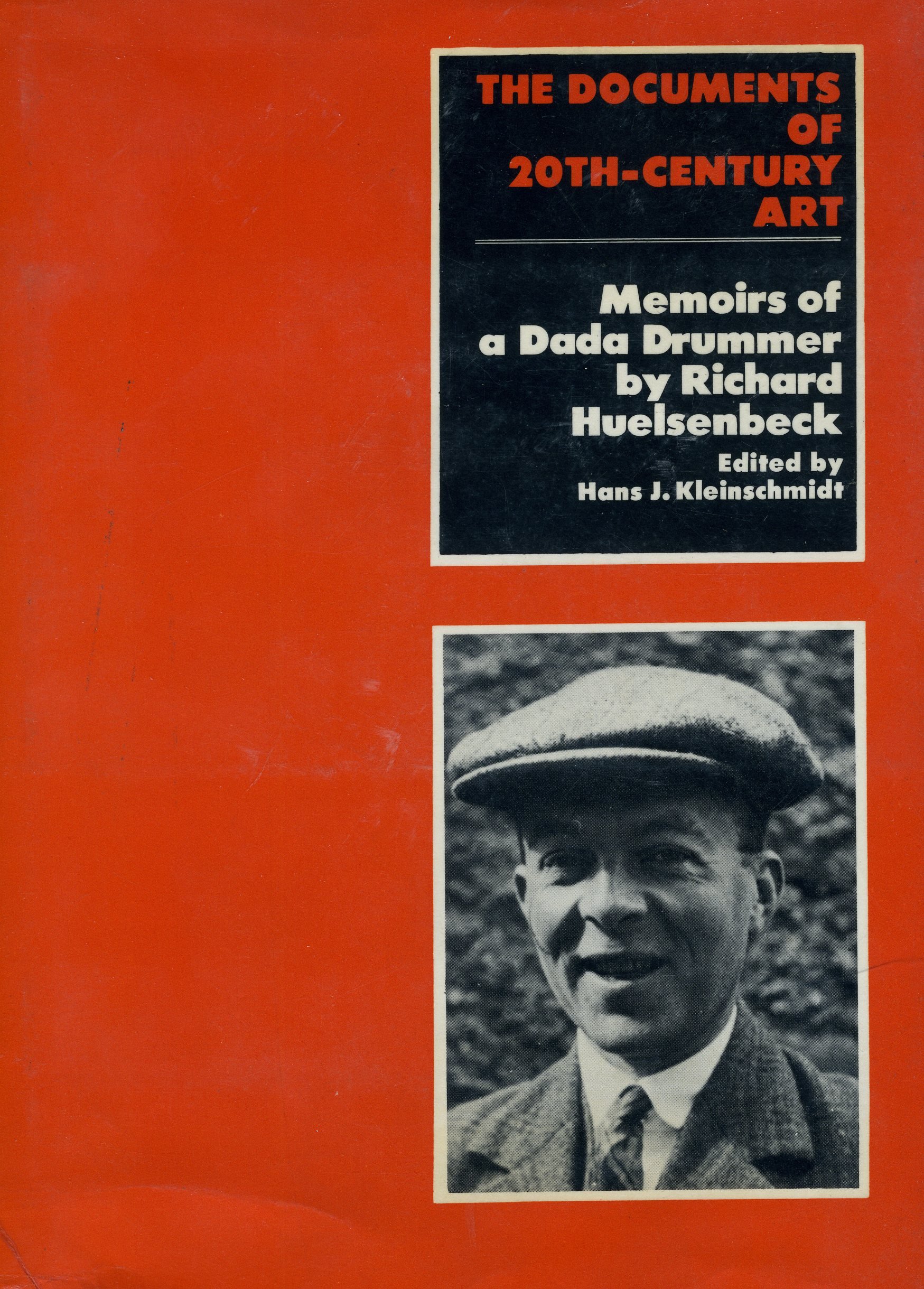 Huelsenbeck’s memoirs bring to life the concerns—intellectual, artistic, and political—of the individuals involved in the Dada movement and document the controversies within the movement and in response to it.

"Have we ever had more reasons for blowing red-hot smoke out of our noses or being prouder? We killed a quarter of a century, we killed several centuries for the sake of what is to come. You can call it what you like: surgery, kleptomania, calligraphy; for all we can say is: We are, we have worked some—revolution, reaction, extra! extra! we are—we are— Dada first and foremost—first and foremost a word, whose fantasticness is incomprehensible." —HUELSENBECK


Huelsenbeck's chosen role for the literary-revolutionary Dada evenings at Cabaret Voltaire (see also Ball, above) was the reading of ""sound-poems"" with the inevitable refrain umba, umba and the beating of a drum (like Oskar from the Grass novel?). His absurdist collection of poetry Phantastische Gebete brought great distress to his mother, who no doubt could not understand what had come over her son the doctor. He liked to think of himself as ""the first existentialist"" and of Sartre, who has proclaimed ""Moi, je suis le nouveau dada,"" as an accredited follower. What distinguishes this ""moralist-cum-mischief-maker"" from the deeply philosophical Hugo Ball is the very evident pagan pleasure he takes in having ""annoyed the world,"" his enthusiasm for deeming and re-defining the spirit of Dada, and for promoting its values (epater le bourgeois) on both sides of the Atlantic. Huelsenbeck, who fled Germany after Hitler, obtained an American medical license thanks to the intervention of Albert Einstein and practiced psychoanalysis with Karen Horney. Many of the short essays here -- including homage to Arp, Duchamp, Tinguely, Grosz and disrespect for co-founder Tzara -- date from the '50's and '60's. ""Psychoanalytical Notes on Modern Art"" and ""Modern Art and Totalitarian Regimes"" are noteworthy pieces on the origins of aesthetic subjectivity and abstractionism. Insofar as it can be explained in the conventions of language (""You cannot and probably should not understand Dada. It will always remain a living part of the essentially inexplicable""), Huelsenbeck is the movement's foremost interpreter. - Kirkus Reviews


Richard Huelsenbeck grew up in Dortmund, Westphalia, where his father was a chemist. He aspired to become a writer and was greatly influenced by the poetry and prose of the German romantic poet Heinrich Heine, whose irony and mocking satire of society he wanted to emulate. At the age of nineteen, he went to Munich, where he pursued medicine for a year before beginning his study of German literature and art history. In Munich Huelsenbeck met Hugo Ball, who would become a decisive influence on his intellectual development. He began to frequent the cafés in the bohemian district of Munich where artists and writers associated with expressionism gathered, and through Ball began to publish some of his writings. When Huelsenbeck went to study philosophy at the Sorbonne for the winter semester of 1912-1913, he contributed as a "Paris correspondent" to Revolution, an "excessively modern and polemical" periodical begun by Ball and his friend Hans Leybold. Ball's critique of Germany and its bourgeois social system reinforced Huelsenbeck's own beliefs and inspired him toward more radical means of expression.
Huelsenbeck followed Ball to Berlin in 1914, where he continued to study German literature and began to publish poems, essays, and book reviews in Die Aktion, an art and literature journal associated with radical politics, published by Franz Pfemfert. Huelsenbeck volunteered for military service in August 1914, just after the war began. He served several months in a field artillery unit but did not see the front and was released from service because of neuralgia, a condition characterized by intense nerve pain. Huelsenbeck and Ball became increasingly opposed to the war and to the intensity of German nationalist sentiment. In the spring of 1915, they organized several gatherings to protest the war effort and to commemorate fallen poets. However, the audience who arrived expecting a solemn memorial was shocked when Huelsenbeck began reciting "Negro" poems. Huelsenbeck's aggressive literature recitals at these "expressionist evenings" were deliberately intended to provoke his listeners, and it was this insolent attitude that most characterized his contribution to Zurich Dada's Cabaret Voltaire events.
Huelsenbeck went to Zurich at Ball's request, arriving at the Cabaret Voltaire in mid-to-late February of 1916. Ball recorded his arrival in his diary and wrote: "He pleads for stronger rhythm (Negro rhythm). He would prefer to drum literature into the ground." When Huelsenbeck performed, he adopted an arrogant and offensive posture, brandishing his cane at the audience and reciting his poems, according to Marcel Janco, "as if they were insults." His poetry attacked the church, the fatherland, and the canon of German literature (Friedrich von Schiller and Johann Wolfgang von Goethe), and was accompanied by big drums, roars, whistles, and laughter. Huelsenbeck's use of a military drum alluded to the proximity of the war, demanding an immediate and uninhibited bodily response from the audience.
After Ball left Zurich in July 1916, Huelsenbeck developed stomach complaints and constantly talked about returning to Germany. His father's ill health precipitated his return in December 1916; by early 1917 he was in Berlin, where he introduced Dada ideas from Zurich and subsequently became the organizer, promoter, and historian of Dada. In January 1918 he delivered the "Dada-Rede in Deutschland" [First Dada Speech in Germany], and in April read a Dada manifesto. By the end of 1920, Huelsenbeck had already begun to chronicle the history of Dada. After the First International Dada Fair closed, he edited and published Dada Almanach, the first Dada anthology. En avant Dada, also published in 1920 and subtitled "The History of Dadaism," indicates the extent to which Huelsenbeck considered the movement to be at an end.
Throughout his Dada years, Huelsenbeck had been continually advancing his study of medicine and began to practice in 1920. He also enthusiastically pursued a career in journalism, becoming a permanent correspondent for several Berlin newspapers and a popular author of travel diaries compiled during his stints around the world as a ship's surgeon. Beginning in 1933, Huelsenbeck was repeatedly investigated by the Nazi authorities. Forbidden to write and in constant fear of imminent arrest, he finally obtained passage for himself to the United States in 1936. By 1939 he was practicing medicine and psychiatry in Long Island, New York, under the name Charles R. Hulbeck. His Memoirs of a Dada Drummer, written in 1969, offers lively reminiscences of his Dada experiences.
http://web.archive.org/web/20160516153440/http://www.nga.gov/exhibitions/2006/dada/artists/huelsenbeck.shtm
at November 11, 2019
Email ThisBlogThis!Share to TwitterShare to FacebookShare to Pinterest
Labels: Carl Wilhelm Richard Hülsenbeck, Richard Huelsenbeck