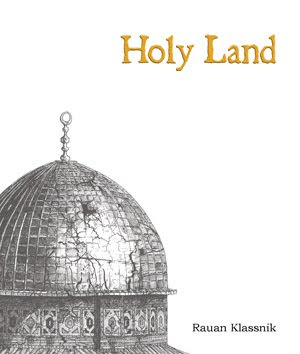 
"Rauan Klassnik's HOLY LAND is not a book for the faint of heart. His poems - dreamlike fables that conflate the domestic and quotidian with the dangerous and the perverse - are bathed in tears and blood: a trip to the bank becomes a journey to Auschwitz; bullets and gore find equivalence in rivers, birds and lush grass. In Klassnik's startling vision, 'the world knows what you want, and it knows what you need. It brings you bodies. And it brings you a gun'. Rauan Klassnik was born in Johannesburg, South Africa. In his early teens he moved to Dallas, Texas with his family. Much of his time is now spent in Mexico."


"Most everything about this book is dark. It contains five sections, each with a cryptic title: I. Wounded; II. Death; III. In the Shape of a Storm; IV. All Night: Forever; V. Holy Land. Though there is little hope that these grimly titled sections will contain heartening poems, one still turns to the first poem with an open mind. Here are the first two lines of the first prose poem: “There’s a child in the ditch by the side of the road. She’s the source of every drop of blood.”
It’s difficult to see how this opening could be anything but horrifying, murderous and haunting, but there is something under the surface at work. The idea that every “drop of blood” is spilled from one body is an idea that connects every human, even in the face of tragedy. Rather than feeling isolated, it vindicates the notion that we're fettered to one another through common human suffering and experience. We are often ignorant of our reliance upon one another, our human dependence, and sometimes, it takes extreme calamity for curtains to be drawn.
Interconnectedness is an important principle for Klassnik. Also in the first poem: “…Over the long, dazzling fields they come: one small piece of time, chained to the next, howling and deep. They stomp and they spit. You belong to them.” These lines end the poem, and they’re wonderful. Time is scary, unknowable, constant, and we are in some sense enslaved by it, Klassnik offers. There is nothing we can do to stop it. The same idea is at the core of LCD Soundsystem’s “Someone Great”— I maintain the year’s greatest song: “…and it keeps coming till the day it stops.” The concept is both harrowing and qualifying. We have a simple choice: give in or press on. Deal with it or check out. Let’s hope we are inspired by the challenge, let’s hope we are arrogant enough to believe we deserve to go on.
The few clement moments in the book are crisp: “Tomorrow we’re going to wrestle in the tall grass and laugh.” They’re also unexpected and nourishing. The narrator is somehow able to think of the future even when there is no imaginable escape. The sentiment behind Robert Creeley’s scene, “the darkness sur- / ounds us, what // can we do against / it, or else, shall we & / why not, buy a goddamn big car…” is present in many of Klassnik’s poems; there’s dread, but he’s not always ready to surrender to it.
Though the lives of many are not quite so afflicted, Klassnik is able to enrapture his reader no matter where he or she is coming from. He uses images and experiences that every individual is sure to connect with. For instance, after difficulty or in dole, we look to a shower to be refreshing and fortifying; however, often showers can feel like an extension of the depression, a wet way to wallow in our misery, to indulge in self-pity. Klassnik writes: “I’m slumped in the shower: marbles glinting like chimes made of bone.” There is a moment of pain while the narrator waits for the water to relieve, but the focus shifts to something more reflective and internal: “…Pain, someone told me, turns to rain. My heart’s filled with grass, clouds, and children crying.”
Things are bad in this book, and it works. It strikes an impeccable balance of helplessness and action. What are disappointing are the narrator’s crude moments. At several points in the book, there are surprising turns of bawdiness as in the second poem: “A rat climbed out of her cunt (or maybe her asshole).” Yeah, why the parentheses?
Well, most suffering and violence is okay in this book. It makes its point. But when animals are used to make a point, I’m unimpressed. For instance, “People mean well. Then they grab your dog and beat him to death in front of you.” No matter how wronged one feels by life, by God, by people, leave the dogs out of it. Leave the bleeding to the humans, even the human children." - Melinda Wilson

"In Rauan Klassnik's new book of short prose poems, Holy Land, the first piece brings us a child in a ditch, possibly bleeding, alongside machetes with angels sharpening the blades, and beasts stomping and spitting. "You belong to them," the voice of the narrator assures us, in reference to the beasts. The world Klassnik conjures over the course of the book follows the promise of this poem closely.
The angels do not disappear, nor do the children or the blood or the beasts. All are held together in excruciating juxtaposition. Excruciating in just the way the poet intends. Nightmares pervade his Holy Land, dream images of a lover's smashed face and the green of contemporary Auschwitz.
"Blood, like the tail of a horse, splashed all over my chest," we are told in the poem featuring the lover's smashed face, which appears in the book's first section, called Wounded. Through all these untitled poems, blood layers thickly over a dystopian landscape where even "the sound of leaves turning red" takes on a sanguinary tinge. The word blood appears in every other poem though certain sections of the book. W.S. Merwin comes to mind, his broken-necked mice pushing balls of blood seeming to shadow Klassnik's images.
The poems line up before the reader and open fire, but not all at once. In careful succession, they rip into the flesh. Unlike those prose poems which lose tension and concision in the absence of line breaks, and whose composition seems perhaps too casual, Klassnik's works are dense and tightly packed with blunt themes. Made of five to ten short sentences strung together in a paragraph, their thematic unities are death, blood, wounds, alienation, brutal sex and divine abdication. To the latter theme, one poem begins "Talking to God's like jerking off."
Yet the poems, for all their unity, maintain distinct identities through the force of their individuated settings, sound, action, and images. These are cinematic pieces, little Buñuel films that slice the eyeballs of the viewer and awaken her ears to their pulse. The sound of the poems is carefully managed, rhythmically taut, and unafraid of grabbing the attention with loud notes at key moments; "We splash, shout, and chase it out."
Given the subject of the works, the broken rhythms often come like blows, though a brief reverie on the skill of a sushi chef provides a moment ecstatic reflection: "Everything he does - each wrap, each cut - says we are immortal." The center of the poem yields "eternity tightening around us" as the narrator sits with his wife in the restaurant marveling at his surroundings. But it is framed by a beginning sentence depicting a man who is waiting to be hung, and a final sentence on him going to the gallows, accompanied by the couple.
What are we to make of contrasts like this? The poet means to highlight subtler ironies than simply the simultaneity of death in life. His violence has a deeper purpose. But it is not until the book begins to sink in that this becomes evident. The sushi/hangman poem offers us, in addition to a dead lobster on a plate of ice and presumably some delicious tuna rolls, the hope of the condemned. He looks at his guards "as though they would tell him he had a chance," and proceeds singing to his demise. It is not a wholly cruel hope here, but rather one of the poet's essential virtues, the chant of the living against time. That the couple accompanies the man to the gallows demonstrates a solidarity with his circumstance that elevates the living by association with death, at least one met in song.
Death by the end of the book becomes one of Klassnik's vices, but his repeated indulgence in it reveals more to us than the vices of many of his contemporaries. The legion of poets raised imitating Ashbery's "Daffy Duck in Hollywood" don't seem part of the same world as Klassnik. His influences seem to come to him through the realm of Ted Hughes and Robert Bly more than the New York School.
Perhaps sex is also a vice here, where kissing takes place in an abattoir, and "to really break someone in requires abuse, confinement, systematic rape." But relationships, for all the nightmares they inspire in these pages, are also the locus of greatest redemption in the book. A poem about driving through the trees indicates a narrator who has become light, who encourages us to "hold each other and kiss.” This admonition resonates all the more deeply by its placement in the middle of a book which also says "Her body is perfect. Bruised and broken." A short poem about girls carrying kittens in a cage over a rocky landscape also, in a touchingly simple way, sustains whatever innocence is left by the time we arrive at the heart of Klassnik's Holy Land. New life is possible, but only when carefully conveyed over a treacherous frontier. Klassnik has written a book full of dark preoccupations that is worth our time to contemplate and understand." - Phil Hopkins

"The prose poems of Rauan Klassnik are short. When reading he sped through his pages of poems and I wasn’t sure when one began and one ended. Not that I paid attention to that at the time. I was afraid that my head would be too full of feelings–those feelings that are just hot spheres of images and nothing else, that I might see it all at once and either die or become enlightened, or maybe both.
Read the Rest…
When he read, tearing through his poems and spitting out his words like rocks from a sling shot, I tried to catch them: to almost take a mental photo of the feeling, mark down its color and weight, and put it in my purse. I’d attach ideas later, when I had some time alone.
Later the images float back in front of my eyes, not quite done with me: “A girl on a payphone begging.” And I shudder: “There’s a child in a ditch by the side of the road. She’s the source of every drop of blood.” And I am moved to keep looking and listening.
Some poems are shocking. Shocking like, “Whoa, I can’t believe he said that or that anyone else but me ever had that thought.” All of them force the reader’s head into the words like a hand behind her head pushing her into the water, only to let her up just in time, gasping and scared and grateful. Each poem–and each but four or five sentences long–contains whole worlds I knew were out there, but was too afraid to look at straight on." - Llalan
Labels: Llalan Melinda Wilson Phil Hopkins Rauan Klassnik