Urs Allemann - There is no life and no death, only a longing for them, a fear of them 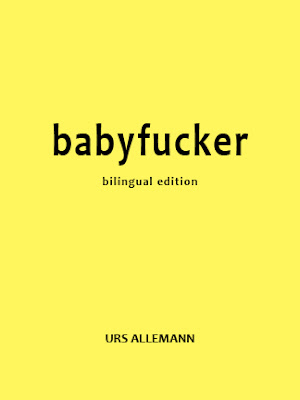 «A Beckettian character, who may or may not be trapped in a room with four baskets full of infants, focuses obsessively on a single sentence—“I fuck babies.” This virtuoso text by Swiss experimental writer Urs Allemann won the prestigious Ingeborg Bachmann Preis des Landes Kärnten in 1991 and caused one of the biggest literary scandals in the post-1945 German-speaking world. Translated now for the first time in a new-bilingual edition, Babyfucker will change your idea of what literature can be and do. Babyfucker belongs in the canon of twentieth-century provocations that includes Bataille’s The Story of the Eye, Delany’s Hogg, and Cooper’s Frisk.»

“A stunning, exquisite, perfect, and difficult little benchmark of a novel that makes literature that pre-dates it seem deprived.” —Dennis Cooper

“In the impressive logical consistency of this narrative, in its other logic, there is no life and no death, only a longing for them, a fear of them.” —Heinz Schafroth

“An experimental text like those of Beckett and the Cabaret Voltaire Dadists.” —Klaus Amann

“The figure Allemann gives voice to is stranded in the middle of an incomplete maturation process, an infantile monstrosity unable to raise itself out of the chthonic fluids of human prehistory.” —Juliane Vogel

«Babyfucker is far more disturbing than the title suggests. The book, written by a Swiss author, spawned a controversy in Germany in 1991. It begins unabashedly with the sentence “I fuck babies,” which the narrator declares to be his sentence. It is the reader’s sentence, too. However, there are no detailed representations of infant pedophilia. There is terse, detached description of an impossible garret, filled with baskets of babies, supplied with a spigot and drain for morphine-laced milk; trepidation at humanity and new life; a man who sees himself in the mirror as a baby — then as made up, limb by limb, of babies. If there are specific sexual visions here, they must belong mainly to the reader, not the text. Among other unsettling things, the volume (which is yellow and pink, tiny, and cute) shows the reader’s involvement in literary atrocities, in any violation committed by shared imagination.» - Nick Montfort

«This is a book to talk about. This is a book you want to carry around with you, just so people can ask you what it’s about. Last week, as I was sitting at a cafe in South Bend, this slender volume lying on top of my usual stack of library books. It’s cover is a lovely yellow, it’s spine an unobtrusive pink. But the title! The title is what interests people most. So someone asks me: What’s that you’re reading? And I say: Babyfucker. Just like that. And that person responds: Hmm. There’s no follow-up question. I have to force their discomfort. I say: It’s a book about a man who fucks babies, or not. It’s this little Beckettian book, this man obsessed with the sentence, ‘I fuck babies,’ constantly repeating, ‘I fuck babies. That’s my sentence.’ Whether or not he actually fucks the babies is irrelevant to the reader, but to that person standing by your chair at the cafe, that’s the only question that matters. Here’s the thing, I haven’t even started touching the substance or the incredible writing in this book, but it’s all solid. This is an inadequate review of a truly stunning book, but I’ve only managed to do exactly what I’ve criticized that person at the cafe of doing: getting lost in the spectacle.» - Lily Hoang

"What does one do with a problem like Babyfucker? When it was first published and nominated for the Ingeborg Bachmann Preis des Landes Kärnten in 1991, the scandal—we're told—was of such monstrous proportions that the book itself was virtually ignored in the squabbles that followed, and a Swiss Beckett was more or less (forgive me) strangled in his cradle. Most of the fuss focused with Puritanical misdirection on Allemann’s admittedly eyebrow-raising title, which—a tricky business for potential apologists—is immediately reinforced by Babyfucker’s fractured, telegraphic narrator: "I fuck babies," is how he introduces himself, and perhaps those with weak constitutions will venture no further. To stop there, however, is to let your scruples deprive you of a severe and ugly gem; and while I would hate to diminish the shock value of the book, let’s be clear: There is no babyfucking here, in the sense of a “scene of babyfucking,” a Sadean blow-by-blow; though, certainly, there is much talk of babyfucking—until, in fact, the phrase could as easily be “I fuck geraniums.” “Babies” are indeed present, but they are rubber, unreal: they do not age; the narrator, supine and immobile (as all our great heroes), picks them up, throws them around, and they bounce; he is surrounded by four creels full of babies (north, south, east, and west), into which, he claims, he can reach at will. And while one supposes there might, in the wide world, be a geophagist who salivates reading about Molloy’s stone sucking, it would take a pedophile of similarly abstract bent to find even a hint of pornographic intent in Babyfucker. The narrator isn’t even certain what sort of genitals he has, let alone how to use them, and it is in this rampant indeterminacy that the book becomes an act less of cultural provocation (certainly to name your book Babyfucker is also to say, “Yes, I have written a book called Babyfucker—and what of it?”) than a raking of the ashes of the novel—what Beckett left us of the novel—until they again give off heat. Here one finds a text both revolting and comforting—comforting because, god help us, Allemann demonstrates that literature can always be made, even if you need to fuck a few babies to get the job done." - Jeremy M. Davies

"Peter Smith writes that "Der Spiegel magazine includes the 'Allemann affair' as one of only three cultural events on its list of the top forty-five scandals between 1949 and 1999 [in Germany]". And, as willing as I usually tend to be to suspend moral or ethical judgments on literature, I'm tempted to glower at this book, hunkered down like an accommodated goose on a Thanksgiving dinner table: unwelcome and foreign. And, as if in protest to this book, my iced americano just delivered a dollop of brown water on the cover, right over the word "-yfuck." Who, I must ask, is Urs Allemann? And what has he written that pricks at the confusing conservative part of myself that I thought I had suppressed years ago?
My ability to apprehend this book aesthetically required two readings. The first reading was to adapt my mind to seeing choice words used in the same sentence: "I fuck babies." If ever an opening sentence broke balls as effectively as this one, I have yet to hear about it. Or see it. Or think of it. The only people who can read a sentence like that and not be jerked into a new level of consciousness are, well, pedophiles, who might find this piece of literature particularly fruitful in its accessibility and relatability. I am not a pedophile; therefore, reading "I fuck babies" is challenging, but intriguing, and allowed me to read all the way through—twice.
The first time I read this, I was desensitized to the language towards the end and fell into the impression that this book was purely masturbatory. I believed that Allemann's only effort was to shock and awe. I focused on the surface details that belied my efforts to really dig in. I saw things like: "I don't intend to look in the mirror. I don't intend to fuck babies with the mirror's wooden handle. Like an idiot. Paul's bumhole. My bumhole. Linda's bumhole. O. O. The baby bumholes". The sentence is revolting, but I keep reading.
The second reading was productive. Found a story that wasn't hyper-indie in the tasteless sense. I learned about Linda, the narrator's wife? lover? stalker? And I learned about Paul, who likes Linda and who may be himself: "But Paul. If we if I am made of babies. But Linda". And the pain the narrator's enduring by way of Linda, whose love for him is torturous. In short: this is the creepiest and most original love story I've ever encountered. The babies are like speed, alcohol, sex, fisting: a way to forget. By the end, though, he's entertaining the idea of fucking Linda, who, by the final two pages of the book, in the final scene, is giving birth to a baby, I presume, the narrator will want to fuck.
At the end I pity the Babyfucker. Not afraid. Not that. Never that. He's not a criminal. He gives the babies morphine. He gives himself to absolute suffering, struggling: "Nauseous. I just felt nauseous. Sick. Now I feel sick to my stomach" (15). Linda's fault. Paul's fault. Not babies' fault. The Babyfucker hasn't, at least, withdrawn from himself. He's honest with himself—aware of his patheticism. He rapes babies. The babies grow large. And he hasn't withdrawn from Linda: "Linda claims that I too was once a baby. Like her. Like Paul. Supposedly I too once had a name. Like Paul. Like her. Looks like her. She brought me a mirror [...] I'm not a baby. Never been one".
Read. The. Book.
Give it a chance. Give the Babyfucker some time, some love, some therapy, some morphine, a Fleshjack©." - Arin Fisher