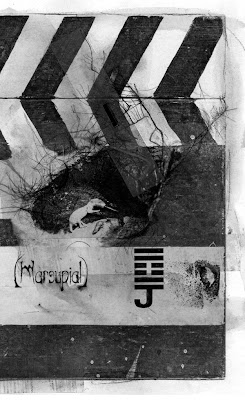 "Marsupial is a fragmented novel about somebody out of place within the cathartic context of the making of a movie overseas."

“Although MARSUPIAL is heavily allusive (quantum mechanics, I Ching, Trojan War, biomorphology, etc.), the allusions are neither the point nor the extratextual reason standing silently behind their literary proxies—as if pulling away the curtain of the story would reveal the true meaning behind each character and event. Rather, the allusions are used sometimes as material springboards and sometimes as the method by which an idea or event is transformed into each other.” —Keith Nathan Brown

"though dubbed elsewhere the first lynchian novel, MARSUPIAL reminded me most often of cronenberg’s NAKED LUNCH, where an unflappable main character nods straight-faced through a bizarre and constantly morphing scenery. witty and — due to its sense of nostalgia for a just-left dream or a long-left city — oddly melancholic. a relatively simple story line anchors the book: a young man comes to Paris to work as a stand-in for his actor-brother during an arty-ish B-movie shoot. on top of that simple narrative’s foundation is built a complex, shifting and dreamy mis-en-scene perhaps as obsessively art-directed as one by richard foreman. white’s repeating concerns include: crayfish biomorphism of all kinds, lacanian fascination/alienation from our own bodies, mothers, brothers, sibling rivalry, paranoia, and the french. an obsessively rendered dreamworld that leaves a long-lingering aftertaste of heartache, MARSUPIAL is a fascinating read.
should be said too: derek white, the DIY master who runs calamari press, has done himself one better on this book’s design, which is graced with a beautifully gritty cover (and from which, his name is defiantly absent) and which also has his trademark collages interspersed throughout." - Eugene Lim 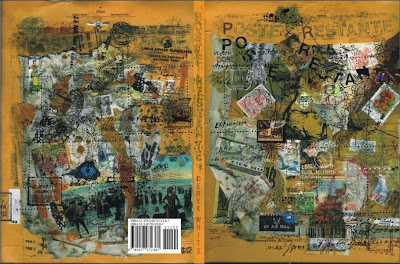 "Poste Restante is a collection of text and image fragments (postcards, if you will, sent from the subconscious) by Derek White. From the forward:
Whenever I dream about "home," it's never where I am residing at the time. For that matter, whenever I dream of a place, say, Maldives or the Plaza de Toros in Seville, it's never the place but an idealized concept of one, perhaps amalgamated with other places, including absurd ones I have never been to or that might not even exist. Yet. The same is true of people. Say, Madonna or Captain Beefheart. Or even elementary particles such as quarks or gauge bosons. Or the relationships in between.
The nocturnal histories contained here were transcribed in the dark, in the wake of sleep when I couldn't always see what, in fact, I was writing. These are merely the residuals, in translated words and images, that clung to my feet as I woke up and walked across the floorboards of where I was living at the time. This is all I can say with any degree of certainty without sacrificing knowledge of place for where I was going with it.
When a letter or parcel is addressed and postmarked, you are assured that it passed through human hands and physical devices to reach its intended destination. It is a validation. A proof of concept. A collapse of its wave function. Poste Restante (literally, 'post remaining' or 'residual mail') is an ad hoc destination for mail sent to recipients who are just passing through a place they do not permanently reside. It's what you say when you don't have a place you call "home."

"White calls the pieces in Poste Resante "residuals," and that may well be the best description. Like memory and it's closest collaborator, imagination, they are built out of that which remains: both dross and deep beauty. The whole feels honest, unsettingly accurate, fresh." - Laird Hunt
"Although there are threads that continue between stories, some of the same characters and places, and more than a heaping spoonful of physics and math (add some paranoia and we're ready for the crying to begin on the auction for White's subconscious) there is no real narrative thread that links them. Like dreams, these stories rise from the ether and then disappear back from whence they came." - Robert Bell

"In his introduction to Poste Restante (translation: “residual mail”), Derek White describes his book as a collection of “nocturnal histories” written “in the wake of sleep.” To put it another way, Poste Restante is a sort of dream journal. Over the course of twenty years, while living in various places around the world (South Dakota, the Cook Islands), White wrote fiction while the dream world still clung to him, in an effort to document his life travels through intuition. There’s rarely any clear connection between story and place—stories written in New York and Arizona take place in India and Panama—but White is less interested in facts than in the unstable, representational nature of locations in dreams, which he calls the “idealized concept” of a place. So, in this sense, the book is actually a dream-travel journal.
Without reading the introduction, Poste Restante seems like a collection of very short stories with signed dates, places, and surreal scenarios. Labeling these “dreams” is just a way of giving White’s imagination free reign. Yet his ability to clearly translate the logic of dream-life is what makes this a specialized, noteworthy work of fiction. His descriptions border on Dada: “A rooster with razor blades strapped to his feet was displayed in a fish tank in the rear of the restaurant.” His actions seem linked by a chain of nonsequiturs: “I continued running lost through the streets. Finding a litter of stray puppies, I kept the runt. My feet kept running but I wasn’t going anywhere.” In one story, he gets so excited about being at a Radiohead concert that he takes off in flight, and then crashes, making “a crater in the ground the exact shape of (his) body—like in the cartoons.”
Also included are charts, drawings, photographs, and pieces of imaginary mail. Sometimes this material makes its way into the story—a stamp with a rattlesnake is next to a story about rattlesnakes—and clarifies the text (he actually labels them Exhibit A, B, etc.). But sometimes the images just add an undecipherable ambiguity, and while this can be frustrating, it’s also what makes this the sort of labyrinthine artifact you want to keep on your shelf to savor for many years.
Published in places like Pindelyboz, elimae, and Snow Monkey, the stories in Poste Restante represent some of the most enigmatic work being published on flash-fiction websites and in journals around the country. White demonstrates the elasticity of the genre and how the compressed format can allow for some of the wildest creative leaps in new fiction. Most notably, though, he shows how seemingly disparate shorts can react when lined up together. With a subject as hermetic as dream-life, the collection could easily crumble apart as episodic nonsense, but White places himself inside the narrative and becomes the connective tissue that keeps everything flowing. From one sentence to another, he remolds himself, from a fictional character to a memoirist, from a Panamanian boy to an albino, ultimately becoming a wraithlike figure looming throughout the pages. He communicates not only his “idealized concepts” of location and dream but also something personal about the dreamer. By never consigning himself to a distinctive personality, he re-creates the amorphous aspects of “the self” in dreams and builds a transcendent voice, as complex as those heard in David Markson’s fiction, and as eerily formless as the narrators of our own indescribable dreams." —Ross Simonini

"In the foreword to his new collection, Derek White reveals how most of the 34 short pieces were composed in the dark while coming in or out of sleep. Poste Restante is the latest in a magnficent line of publications from a small independent press called Calamari Press, presided over by Mr. White. In roughly four years they've managed to forge a reputation not only for linguistic excellence but for writing with unmistakable identity, including titles by aesthetically innovative authors such as Peter Markus and John Olson. Like William Burroughs or Ben Marcus before him, White trolls a terrain known to most only under the influence of via heavy sedation or REM. The stories here are multi-layered and often turn in on themselves. Characters shift identities; they are transformed by their surroundings. As disparate images and unrealities collide into one another, they mesh the mystical with the familial, the folklorish with pop culture.
To White's credit, the stories do not suffer from the brand of symbolic rambling that often accompany fiction hewn from dreamstates. His plots, while often shape-shifting, veering from one end to another, manage to absorb the reader rather than maintaining the impenetrability of hieroglyphics. Each individual unit has its own history, its own assumed background if you will; and together they form a collage, a sort of textbook of hidden minds. As often as it is intense or surreal or nightmarish, the stories use their fanaticism to make you chuckle or squeeze your knee. In "Field Trip to an Emergent Volcano," Johnny Rotten and Jesus Christ take children out on a field trip to active volcano; in "Body of Evidence," a man bowls by throwing himself down the lane. Rather than exploiting their strangeness, though, the stories seem to feed off one another. Like the detached sentimentality often evoked after time spent in one's own dreams, the stories seem hungry to communicate the things humming within them; they want to transfer their energy into a remote location.
Beyond the bedtime logic and bizarre landscape, it is White's often playful and incantatory language that turns the head. The sentences seem to linger a while after they're gone. Like Lydia Davis, White can turn a phrase, and is adept at honing his sentences down to their barest, most effective ends. It is partially because his words are so rhymthmic and even soothing that the stories are able to mimic the dreamstate they channel from so well. They slip in the back door and snake around you. Soon you're neck-high where you hadn't realized you were wading.
The title Poste Restante refers to mail that is held over by the post office, an intermediary destination for things sent to people who have no particular place it can be delivered. Appropriately, embedded within the text are a series of "Exhibits," collaged images often as textured and provocative as the stories themselves. Together they invoke a sort of handbook to the dreamworld, a placebo substitute for sleeping pills. Poste Restante is worthy of sitting on your nightstand to help nurse you in and out of elsewhere." - Blake Butler
Labels: Blake Butler Derek White Erik Davis Eugene Lim Keith nathan Brown Ross Simonini