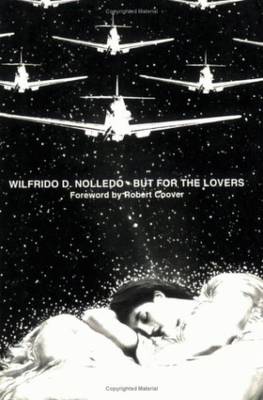 Wilfrido D. Nolledo, But for the Lovers

"In the years since its original publication, But for the Lovers has acquired an underground reputation as one of the most remarkable novels about World War II, doing for the Pacific war theater what Joseph Heller's Catch-22 did for the European one. Set in the Philippines, But for the Lovers depicts the survival of a cross-section of Filipinos during the Japanese Occupation and the American Liberation.
The cast is enormous, including an old man who used to wander the countryside entertaining children, a young girl raped by Japanese soldiers, guerrilla messengers bringing word of the coming of the American army, and a Japanese major who views the war as the first step of the liberation of the Asian people from Western civilization.
This extraordinary novel is no less remarkable for the power and the beauty of its language than for the exotic and magical world it creates. Ranging from hallucinatory lyricism to documentary realism, from black humor sketches to scenes of horror and degradation, But for the Lovers is a rich and complex exploration of language, history, and mythology."

"For his first English novel, this Filipino author received high praise, including that of LJ's reviewer who claimed Nolledo "[has] perfect control of technique, and appears, enviably, to be able to write almost as he pleases". The novel is set in Manila during the Japanese occupation as the American invasion is beginning. This remains an "important novel."

"The book shows the Philippines as a land of people struggling for hope, surviving against the tyranny of the Japanese as they await General MacArthur's return. But for the Lovers is a classic story of love, war, and freedom." - Explanasian

"This is a strange, compelling book that has the tortuous complexity and is fraught with the labyrinthine terrors of a dream..." - Publishers Weekly

"[Nolledo's] deliberately disjointed style merges personalities and events into one stunning nightmarewith a momentum all its own, and a built-in, kaleidoscopic continuity." - Martin Levin

"There's some ongoing discussion on Filipino-American novels on the Flips Listserve. A series of titles was shared.
Then Paolo Javier mentioned,
THE text that really got me back into reading Philippine Literature was W. Nolledo's BUT FOR THE LOVERS. This book was a real watershed read for me in college, but I didn't so much read it as read THROUGH it...opened my eyes (& heart) to the phil lit section in my college library, which was surprisingly vast (I attended the University of British Columbia)((go figure)). They even had a first edition of the book, published in '71 i think (!!). so do check it out...
I immediately and enthusiastically zipped out the following post to the Flips List: "I am so happy Paolo mentioned Wilfrido D. Nolledo's novel, BUT FOR THE LOVERS! This is one of my top two favorite novels ever written by a Filipino author."
I'm a bit surprised now at realizing I've never blathered enthusiastically about this book before. I've long wished to see the type of consistency in energy as well as diction as I've seen in this book... particularly when (in my experience) it's not as mentioned as frequently by those who would teach or create *lists* of Filipino American literature.
Here's a one-paragraph excerpt:
Whenever the boy was away, Hidalgo gave imitations of foliage to the girl. This recital carried him into: alder, myrtle, deodar, linden. He shaped sepal in his hands and spoke of fatal fragrances. On this personal stage the old Spaniard performed with love and variety for he knew his blushing audience would follow him into the restlessness of his art. He had only to mimic the mating call of cauliflowers and she would reward him with unfeigned, even tearful laughter. Posturing on his wriggly cane, he would amble into center light and venture in the delicate rhythm of liche. In his preludes, he was always gay, flamboyant. To this she curtsied, joining him breathlessly, his father's book of dichos in her hand; and together they would take a bow.
THAT is a Prose Poem in itself, and yet that paragraph is obviously just one of many in a 316-page book.
Definitely, let's recover this novel out of its undeserved (relative) obscurity. This is the kind of book that, had it been touted over other (cough) choices, would have eased the global reputation of Filipino literature being great writing. Indeed, according to Robert Coover's introduction in the Dalkey edition, this novel was published in 1970 by E.P. Dutton and its editor was the legendary Hal Scharlatt who died (not yet forty) on an indoor tennis court. Coover says that, "Without Scharlatt, Nolledo had no one in the industry to champion his writing. Thus it was that one of the best books of the decade, abandoned by its own publisher, came and went virtually without notice.
Well...what a shame! And don't let us be naive in believing that writing well suffices for marketing and distribution purposes. Writing well suffices for... writing well. Marketing and distribution is something else. So let's spread the word on Nolledo's novel... TODAY.
So, okay: I was enthused. I am still enthusiastic. Note that Coover didn't call this novel one of the *best Filipino novels* out there; Coover called it "one of the best books of the decade" regardless of the author's ethnicity. So Nolledo has never received the attention he deserves—and it's time to rectify that. Apparently, Melissa Nolledo-Christoffels (Nolledo's daughter) is setting up a website that hopefully will serve to introduce Nolledo to a new generation of readers. Great! I look forward to it. Until then, here's another excerpt from Nolledo's novel, BUT FOR THE LOVERS.
Prologue:
HE WAS BEGINNING TO EAT FLOWERS and the crescent moon was in his eyes when he awoke again. One night long ago when they had intercepted a code from the enemy on the shortwave and had not needed him anymore, they pulled out their tents, mantled him with leaves, and left him. They left him a rifle, a buri basket and a book of psalms, for the major had decreed in defense of this murder: Let the little legionnaire lie here and die; it is written, it shall be read. But the boy went on sleeping and did not die and when he awakened it was to see (it was to find himself alone) a bird, a whitewinged maya dart in from the west, perhaps headed for the monsoon. Steadying the Springfield, he cocked the hammer with a quivering thumb, and waited. It flew away, whatever it was, and now he squinted up and remembered that it was the first time in a long spell he had seen the sky, and he thought: It is longer, lonelier and lovelier than any of my prayers. He sighted the nimbus—an eagle in captivity—and fired." - Eileen Tabios

"...There are certain things you can not stop. The Fall of Bastille for example. The revolutions in Russia for example. The revolutions in China for example. And then, you can't stop reading a book entitled "But For The Lovers by Wilfrido Nolledo".
Wilfrido who?
Well and well again! Wilfrido Nolledo's book ain't an easy read. At least to me. I wanted to give up its reading after the first fifty pages because, well, it requires somethin' to comprehend, I say somethin' because it is not your typical novel where you see men walkin' and talkin' and plottin' in an expected order. It's a novel that drives me crazy even now because I still don't know what that somethin' is.
It bombards me with millions of images in a stack revealed without any arrangement. The order becomes clear only somewhere close to the end. But in the end I don't know anymore if the characters were real or symbols. Weird really.
Is this novel a poem in prose? Or prose in poem? Would a poet understand it better than me who is non-poet? Is this novel about World War Two (it's time frame) or is it about history (characters composed of natives, Spanish, Japanese, Americans) or is it a social commentary ( struggle between a businesswoman(Tira) and her impoverished tenants) or is it about brutality ( heads rolling, women being raped, Japanese soldiers murdered ) or is it just plain wild ( an exotic dancer turns into a male, a landlady demands to be f---- by male tenants who could not pay rents, and the worst of all, a woman biting a lethargic man's penis until the head is cut off as the building collapses on both, ouch!) or is it about love (Amoran and "the" Filipino girl whose name isn't mentioned) or is it about the Philippines symbolized by "the" Filipino girl whose name can not be mentioned? I can go on and on sharing with you the images and theories that linger in my mind - believe me - there are lots of them in this novel. But some images I can no longer recall. And there is also the big possibility of me misinterpreting these images.
Was this novel written when Salvador Dali was hot?
Another thing about it is its English mastery where every word seems to be plucked out of a mountain of words. Like a novel that painstakingly weighed the use of words. It reminds of the current lamentation of Filipino educators who claim that the lustre of Filipino English in the 1960's has been totally wiped out in this generation.
Was it written in the midst of hallucination? Or some psychedelic imagination in multiple colors like the Hippie colors of the late sixties?
Was it written at a time Pablo Picasso was hot?
Was it written using magic realism to the max?
I may never be able to tell you anything about this novel that came out of our country when we were still the best Asians around.
It is a novel whose style is as contemporary and experimental as our time today. But it is not an easy read. It is not one you'd consider a potential bestseller.
And finally, But For The Lovers reminds me again of the Filipino generation who witnessed the destruction of our country because of the savagery of war. The same generation who wept loud as they saw their Philippine flag replace the American and Japanese flags after the Liberation. The same Filipino generation who built the Philippines as one wealthy and intelligent and peaceful nation in the decade fifties and sixties. The same Filipino generation who are rolling on their graves in disgust and anger at the current generation who don't seem to give a damn about the country that was trusted to them." - Alex Maskara more