Patrick Lawler’s novel is about resonance, echoes, and naming; about hiding inside of names; about standing completely still; and about the fractalization of family. Connect the dots. Connect the secrets. Mother. Father. Sisters. Brother. Every character wears a variety of masks, and every place is also someplace else.

Read it at Google Books

When you step inside Patrick Lawler’s Rescuers of Skydivers Search Among the Clouds, you will find yourself hovering in the clouds, among a family and a town, and in the world of one of fiction’s most inventive writers.
Patrick Lawler’s novel is about resonance, echoes, and naming; about hiding inside of names; about standing completely still; and about the fractalization of family. Connect the dots. Connect the secrets. Mother. Father. Sisters. Brother. Every character wears a variety of masks, and every place is also someplace else.
Rescuers of Skydivers Search Among the Clouds is a reconfiguring of narrative—how stories exist inside stories, how place exists inside self, how self exists inside others, and how parachutists exist inside clouds.

“I love Rescuers of Skydivers Search Among the Clouds. Domestic myth, fairy tale, troubled and clear—this novel moves me to tears.”--Kate Bernheimer

“Rescuers of Skydivers Search Among the Clouds in its headlong descent into the atomistic atmosphere of language never attains a terminal velocity, or more exactly, it creates a velocity that terminates the notion of termination. The book is unstoppable in its amazing folds of folds, its pleats and pleas, its Mobius confabulation and textual texture. It falls and floats. It levitates longingly. Patrick Lawler’s book pulls an infinite load of G’s and just as many gees!”—Michael Martone

Patrick Lawler, Feeding the Fear of the Earth, Many Mountains Moving Press, 2006.

FEEDING THE FEAR OF THE EARTH is an outrageously original collection," Susan Terris writes of the Many Mountains Moving Poetry Book Contest winner. "Reaching across time and space and cultures and genders, Patrick Lawler gathers characters as diverse as Christopher Smart, Ed McMahon, and Rosa Parks. Ecological and ethereal, political and historical, philosophical and physical, this astonishing book is a place where anyone who has walked the earth can rub up against anyone else" - Linda Tomol 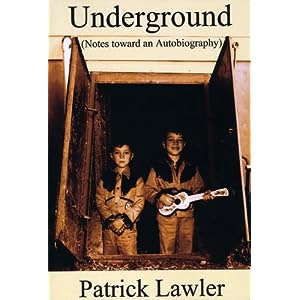 "Patrick Lawler's new book UNDERGROUND (NOTES TOWARD AN AUTOBIOGRAPHY) is a unique and fascinating volume: part interview, part poetry, part elegy for his father, part examination of how a son with this particular father became a writer and a poet. You will be in awe at how Lawler, a boy who spent seven years living with his family in a cellar with no books—just a magic word box—transformed himself and came to terms with his father's idiosynchrasies as well as his own. 'At One of my Father's Funerals, I was Humphrey Bogart' is a knockout piece! Read this, read it all. Find out how Lawler discovers that an ending 'blossoms into multiple beginnings.'"—Susan Terris


Underground was published by a small press called Many Mountain Moving Press, which seems to be the one-man operation of Jeffrey Ethan Lee. Unexpectedly, I found myself quite affected by the book, which is, indeed, a sort of memoir, or more precisely, the account of a father rendered by a son. Unexpectedly, since generally I am quite suspicious of any rendering of world or word into binaries, such as dark/light; interior/exterior; above/beneath; shadow/sun, etc. For some reason, I accepted such tropes in the context of this book, a fact that I am still mulling over. Underground is structured as an alternation between an interview with the author by Paul B. Roth that appeared in Bitter Oleander in 2009 and selections of Lawler's poetry (these seem to date from the 1990s to the present). Although Underground is already a hybrid-genre text (poems, interview, a few photos, bio of father, bio of author), strangely enough, I felt myself wanting it to go even further in that direction. I found the alternation between interview sections and poems a bit too predictable.

When the author chose the title Underground, he was not using a metaphor. For, as he states at the beginning of the interview with Paul Roth: "As a child I lived in a cellar for seven years. We had intended to live in a house like everyone else, but my father broke his back and only the cellar was finished." (5) The cellar (the beneath) and the father (broken) are the two primary concerns or motifs of the book.
There's much language in Underground that I found appealing & evocative. The following is but a sample:
"but my destiny was to be a root."
"I'd take out/ the thin insides of pens for veins."
"I leave the rivers running all night."
"I watched things die around my father's hands." 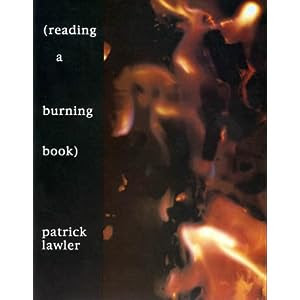 This, Patrick Lawler's second book-length collection, is his follow-up to the critically praised A Drowning Man Is Never Tall Enough, and affirmation that he is truly one of the up and coming poets of his generation. Restricted by nothing, he lives on the edge without hesitation or fear. He is a poet for our time.


How lovely, to find poetry where I should never have thought to find anything of the kind. Imagine a book with a tarnished title, further soiled by the parenthesis in which it appears. Imagine, in the same vein, that this book is issued by a publisher with the unlucky designation Basfal Books. Now you have what I had when I first laid eyes on (reading a burning book), words already weary unto death with their preening in the lower case. But then one has oneself a look inside at what Mr. Patrick Lawler has wrought -- and sees, blasing back, very life, burning and burning, the mind prudently, but never anxiously, watchful in the shade. Thank God, thank God -- here is a poet. - Gordon Lish

Leaving "the mystery intact in every clue," Lawler's first book exposes, shocks and stirs us. - Newsday

In the case of Patrick Lawler, however, verbal brilliance is put in the service of deep philosophic probing...- Booklist

[A Drowning Man Is Never Tall Enough] is the genuine thing, not imitative but full of its own humilities and hubris, as all great literature is. The book is a wonder. - Bin Ramke

I'm given all sorts of pleasure by such immediate poems as "The Front," such skills as inform "Is (Is Not)," such structural accomplishments as "Stone Music," and -- clearly -- the progressions of the whole final section. - Philip Booth 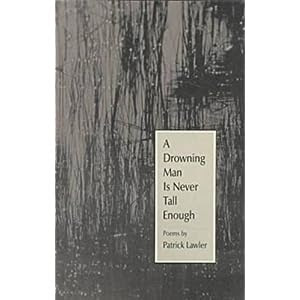 Patrick Lawler moves into the slender lines of shattered glass, the spaces between lyric and narrative, between metamorphosis and mutation. From the artful surface of a Russian novel, rich with symbolism and white bears, to a survivor's unwillingness to immerse himself in life or leave it, the poems in A Drowning Man Is Never Tall Enough hunger for a language beyond the solid, for the fragmentation that makes a scene complete.


Brilliance in poetry isn't always to be coveted; sometimes a poet is so blinded by the gorgeous phrase that meaning seems irrelevant—a feeling the reader rarely shares. In the case of Patrick Lawler, however, verbal brilliance is put in the service of deep philosophic probing: the question is 'how to distinguish / evil from benign absurdity' in a world where the 'dark dream names' of wars are brought to us nightly in 'talking light.' The poet, struck with the loss of moral certainty, finds even language slips away from what it tries to pin down... This fine first book should appeal to readers who share Lawler's concern for the moral and the real. - Booklist


I've heard a few of Lawler's public reads, and I browsed through an interview he once had, and I was impressed. Then I got lucky. I had him as a professor at college in a creative writing and poetry class, and I got a chance to speak with the mysterious man. I expected this genius to arrive in a suit; prim and proper with his hair slicked back, holding an attitude of superiority. I was in for a rude awakening. He dressed casually, acted casually, and I thought he was instead an average Joe who lucked out with a book or two. Wrong again. He walked into class and treated every person there as if we had all been old friends, and we held strange conversations of how to paint sculptures, and how a single word can say so much in a poem. He blew us all out of the water with his casualty and spunk. Patrick Lawler is a genius, as a teacher AND as a writer, but mostly as a person. After he revealed a bit of his life to class, I couldn't help but to be intrigued. I asked to have an interview with him, and now I realize there is a method to the madness. I understand now why he is who he is, and how he created such masterful pieces. After growing up in a cellar, and having an alcoholic father who broke his back and wore a strange brace was a perfect inspiration for Lawler's poetry. His life is far from boring. Lawler is a strange man that chooses to hide behind the scenes of a small college hoping to go by unnoticed, but he deserves to be put high on a pedestal and be praised for his work, and this set of poetry he has created in A Drowning Man is Never Tall Enough is just a small bite out of the life and times of the hidden genius that is Patrick Lawler. Thank you for everything Professor Lawler. - Eden J. Gideon

The Zeno Question by Patrick Lawler