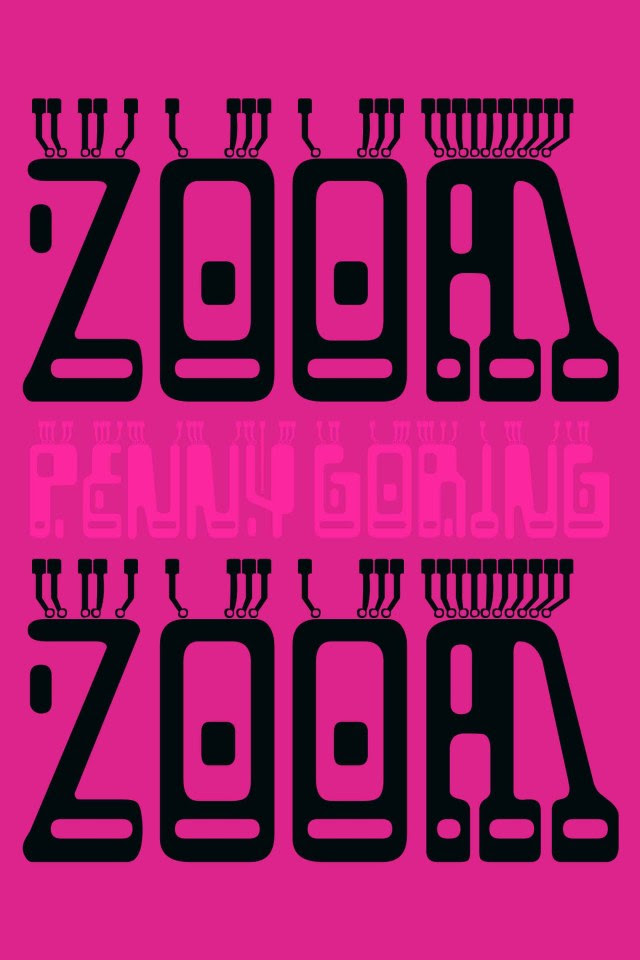 I’m not sure where to start with this review.

Maybe here. Cities across England are descending into chaos; the world is making little sense as riots break out and smoke darkens the skyline. As such, I feel I can’t give this book my full attention – my brain is processing Twitter and news feeds faster than it can process what I am simultaneously typing.
But then, Penny Goring’s The Zoom Zoom doesn’t make sense. It revels in chaotic tumbles of clashing words and disjointed structures, disenchanted and disturbing characters. Apologies if that seems like an opportunistic segue from serious social disorder to a book. It’s not opportunism; it’s about wanting to focus on something that is black and white, tangible and comprehensible, in order to understand the world: a book.
But The Zoom Zoom is not a nicely packaged narrative, nor is it filled with familiar structures, and for that reason, my night has descended into absurdity as I flick back over notes about lecherous, tentacled men and trios of neon wigs whilst breaking news reports broken glass and fire in all my regular haunts. Penny Goring has a fearless approach to creating text, throwing words at the page, making collages from half-remembered experiences of dark tunnels – both physical and metaphorical – and the seaside. And dolls. In talking about her approach, she explains how she moved away from painting – which “became stifling” – to writing which presents her with endless possibilities.
The Zoom Zoom is published by the “brave, bold and innovative” Eight Cuts, who also brought us The Dead Beat by Cody James. Founder Dan Holloway described Goring’s work to DJ Eratic:
As a writer, Penny uses language in the same way a stick of dynamite can blast open a mine. There will be shards and slivers, but a perfect opening and then, a gloriously dark, incandescent space in which to lose yourself among rubble and bones and diamonds.
The simple take on The Zoom Zoom is that, yes, it is a collection of short stories and poems, but they only resemble the classic forms if you live in a sensory deprivation tank.
And this, dear reader, is another reason I feel I’d be selling the book short if I were to try and give you a synopsis of each story, a critique of the poetic styles used. It’s honestly like nothing I’ve ever read before. My criticisms lie in how I’d have done it differently, had I tried to paint those characters and encounters with words. But this is Goring’s show and she steals it with sweet, sleazy, salacious and sometimes sickening turns of phrase combined with a beautifully playful approach to rhythm and structure. My advice is pick it up, be blinded by the shocking pink cover and let the wave wash over you. I typed notes into my phone whilst reading this and the first section says: “T Rex, candy pink wig, trashy-sleaze-sci-fi, incestuous, rhythmic, bold and garish, Bowie, slurping daisy chain, grotesque, frenetic, raw, Gregg Araki, Samuel Beckett…”
Whatever else The Zoom Zoom may be, it’s honest and it’s powerful and it makes me giddy to think there are publishers and writers working together to explore the possibilities of language.
And to return, almost, to the beginning of this review, I’m tipping my hat to Eight Cuts. Not just for taking a chance and publishing exciting, raw and honest new writing, but also for offering up their stock, their site and their ideas to save Afflecks Palace, a place where I misspent my youth. Last night it was one of many victims of looting and destruction in Manchester. It has survived before, it can again. As words can, and do, in all their many beautiful and sometimes disorienting forms.- Alex Herod


“Reading Penny Goring’s poetry and prose and prose/poetry, is so refreshing and startling an experience, that it makes me think writing is going to be ok in the 21st century. Hers is a voice so fresh and so honest that it is very difficult not to make comparisons with some of the ‘greats’, especially poets. But she is unique and so I will just urge you to read her words for yourself.” Quiet Riot Girl


“This book of poems or stories or whatever they are – but what do the niceties of form and genre matter here? – sings and swears and screams, raises welts and cicatrices of violent torments, shits tears of fury and frustration, hums with the heartbeat of witchy womanhood and big big universe-love. It laughs a lot, throatily, tossing its head back like a barroom babe encircled by admirers all agog.” - Jim Zovich

“precisely and exquisitely controlled…It has the trappings of dark fantasy, but it is also uncompromisingly true. It is about love, the way it can distort as well as ennoble, twist us from delirious joy to monstrous jealousy with the randomness of a hanged body in the wind. What Penny Goring writes about is difficult, awkward and uncomfortable. It is also essential and she writes about it damn well.” - Words With Jam

The Zoom Zoom by Penny Goring

Under the massive mossy wings of a praying angel we hold hands and dance around the graves. When we are dizzy we lie flat on our backs amongst the toppled urns and dead flowers.
The other girls kneel down and place their skinny forefingers at strategic points beneath us, and with their eyes screwed up, concentrating really hard, they sing the songs we taught them.
We know the right words – we know exactly what we are doing, and it works, every time.
We rise vertically and bob unsupported high above the tombstones. Drifting upwards on the cobwebbed breeze, hair and skirts a-swishing, we look for all the world like three flying rag-dolls.
ZOOM! ZOOM! Darkling girls.
Aloof and rare, we soar. 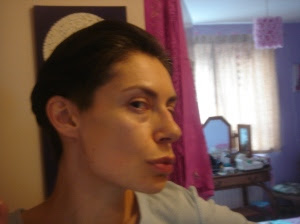 One of the most exciting things about your work is that you’re not afraid of language. A lot of writers would be terrified of putting the words together that you do. Do you think people have had their imagination scared out of them?


Penny Goring has produced a strange little cookbook that is also a hotel guide, a book of Poetry and a short history of some of the Royal National Lifeboat Institute, The Hotel guide is what it says on the cover and gives a list of the Pride of Britain Hotels that the chefs who provided the recipes work for. Some of the recipes I think are written by chefs who have their heads a little to close to their own exhaust pipe, and are in my humble opinion a waste of good fish. But, then, suddenly, there are recipes that bring back memories of childhood, sitting on the beach at Sker, eating fresh Lobster cooked in newspaper on a fire on the beach, so I gave the rest of the book a second chance and with over forty mouthwatering seafood dishes I am glad that I did as there are some superb recipes.
The Poems and Limericks are very amusing, and all have a nautical theme and the artwork is very good, but the history of the Royal National Lifeboat Stations make this a very interesting little book giving details of some of the heroic rescues that have taken place around the country in the past.
This is a quirky little book that I really like and would make a nice gift for any fisherman or boat owner that I would buy. - tropper66


Temporary Passport by Penny Goring
It is late in the twentieth century and I'm on my hands and knees for you. Down on the boards of this stationary freight train, it's dark and your coat is our tent. Toulon: too long ago to clearly remember your hands or the feel of your mouth.
On a speeding train I took off my knickers and the open window grabbed them from my hands. We were glugging red wine from plastic flagons, going to Nice to beg on the beach.
Those sand-blasted beggars were feral, stole your knife as we slept under sheets of damp chipboard. You forced me to shop-lift a tin of sardines, if it wasn't for you we would starve.
Busking in Brussels was futile, me screaming and you on the bongos, all you'd accept from your father, before he returned to New York. Plastic flowers bunched in my carrier bag, eyebrows unplucked, hair greasily grasping the wind.
Marseilles with a flimsy message propped at my feet, slumped against a wall trying to look hungry, my puppy fat making it difficult. You always watching from a distance, making sure I was safe.
Poverty was too much for me. You said I was too much for you.
At Bettina's expecting a welcome, we weren't wanted at all, but she fed us and took us to the nightclub where her boyfriend was a DJ. Our contest to see who could pull first, you seemed gleeful when I won hands down. All I did was stick my head out, under the lights at the bar.
He was a good-looking Belgian, singer in a band he said, and he wanted to buy me a dress. He came round the next day so I had a shower and he took us all out for coffee and chocolates, then dined and seduced me alone. You were angry I didn't bring a doggy bag back, I was numb with cocaine.
Eating raw cabbage in Oxford watching lots of uppity yahs, we danced with exuberance at their party, heathens, wild for them all. You shagged some girl on the staircase, I nicked a tenner from her dressing-table drawer. It was then you knew I was yours.
I was relieved we lost her before Paris, even though the guards beat you up. I stood frozen, train jolting, as they took turns to punch you and called you ‘roast beef', your teeth flashing broken and whiter against your open mouth slashed with red.
They threw us from their cells early morning, we walked silent streets swigging milk from the doorsteps and I loved you, your beauty coagulated in blood.
I drew you for three days in Calais, my pencil recording your fantastic face, I should have held onto those drawings, I'd have something left of you now.
You never answer my letters but you still come looking for me. You find me at night when I'm trying to sleep and tell me all about why you can't stay.

i imagined myself & i was phlox saxifrage pompom ranunculus

& i loved the painted tongue

& i wore the rattlesnake

at poppy anemone ceremonies & across myrtle mimosa until morning

i worshipped the ornamental onion

my mouth a red wet saxifrage

*
i want to stand where no shadows fall