Arno Camenisch - The four main (unnamed) characters are a dairyman, his farmhand, a cowherd, and a swineherd, who all live and work in close proximity–but this is no Heidi 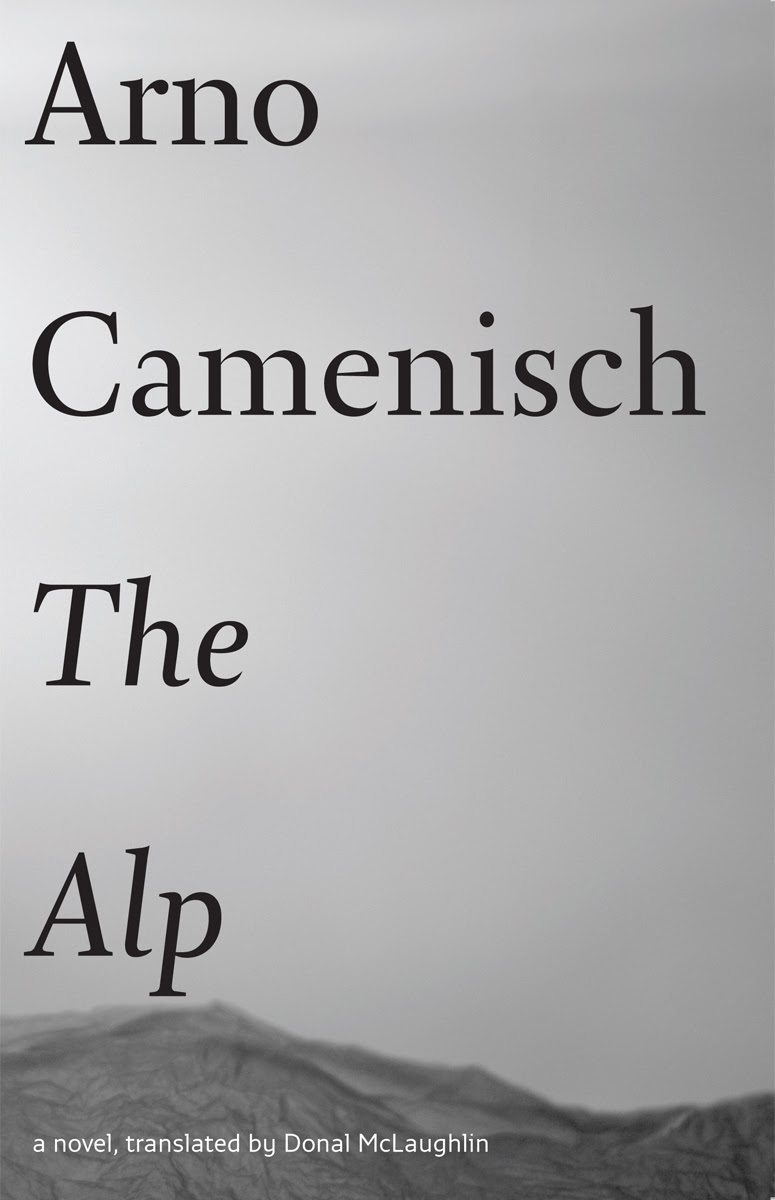 Arno Camenisch, The Alp. Trans. by Donal McLaughlin. Dalkey Archive Press, 2014.The Alp is set in the Swiss Alps, by the Sez Ner (so also the title of the original):
Sez Ner is the center of Surselva. A modest height, it has everything that makes a mountain a mountain. The steep slopes, the shadows, the ridges, the peak, the cairn, the cross. At the back of the mountain, the rock face to crash to your death from. Unassuming, it stands there, putting up with whatever goes on round about
The novel focuses on the summer-season near the foot of the mountain, when the farmers bring up their cows to graze (and the story closes with cows being led down, back to the farms, at the end of the season).
The Alp, presented in a few hundred short passages and scenes, describes events and episodes from the summer. Four central, recurring characters, on whom much of the story (to the extent it is a story ...) focuses remain unnamed, described only by their positions: dairyman, farmhand, cowherd, and swineherd -- though Camenisch identifies many other locals by name (and notes of the animals: "The cows have names, the pigs don't"). The four aren't simply representative types, either, defined solely by their duties, but their nominal anonymity is an effective way of having them stand out against some of the more incidental but named characters.
The area is a popular tourist destination, and the locals are frequently confronted by groups of these largely clueless outsiders. There's other outside interference, too, from the priest, giving his blessings, to the agricultural inspectors, to the annoying guy who insists on coming in his Porsche. It's a life of contrasts, and while a more modern world intrudes, the basics remain unchanged -- repeatedly made clear, as also in a scene where the dairyman tries to listen to the "radio with the bent aerial", getting only static, the sounds around him instead:
The wheel on the wheelbarrow squeaks. The rooster's standing on the edge of the fountain, crowing.
The novel is a sequence of events, (relatively) major and minor, but with little allowed to stand out: if one thing happens, it's quickly displaced by the next occurrence, and there's always something to keep them busy, preventing them from lingering over anything. Along with the more mundane: someone gets run over in the village, there's a fire, a cow has to be put down, another tears one of its horns off, a ram breaks its legs, "Georg has shot himself in the foot" (literally). But it's all part and parcel of life in the shadows of the Sez Ner.
Occasionally, thoughts darken:
What would it be like to sink into the bog. Up to your knees. Up to your hips. Up to your neck, and then completely.
While not expressed, that seems to be a feeling and concern shared by these characters, who could see themselves stuck in the bog that is their lives, and wondering how deeply they've been sucked in .....
While there are reminders of just how harsh nature can be here -- some tourists nearly freeze to death on the mountain -- the summer is a time of relative comfortable ease. But it's a short season -- and, as one character suggests:
Morality is a frost, says Luis. And frost arrives early here, and stops late. The first frost burns any green shoots. It clears the hillside. What remains has always been there. You can depend on frost.
If not interlopers to the extent of the tourists, the central characters and their animals are also only visitors on the hillside. By the end of the novel they are in retreat, preparing to take cover for the long months until the next summer; they can only take on nature for so long.
It's a neat depiction of contemporary life in some of the darker reaches of the Swiss Alps. The original, presented in both German and Romansh (Rhaeto-Romanic -- the local Sursilvan dialect, to be exact) surely manages to convey the atmosphere even better, but even this essentially monolingual translation offers a rich, deep portrait of a certain kind of country-life.
The Alp is a thin book -- less than eighty pages of text -- but still rewarding; the first in a trilogy (which Dalkey Archive Press will be publishing in its entirety), it will be interesting to see how Camenisch builds on this small but sturdy foundation. - M.A.Orthofer

Four characters, identified only by their occupations, spend the Swiss summer working, drinking, brooding, and sleeping. Around them, as things fall apart, tourist gawk, soldiers train, and what passes for progress looms. That sums up this very short novel, a series of vignettes translated from Swiss-German and the lesser known language of Rhaeto-Romanic, itself an amalgamation of ancient bits of pre-Roman contact tongues, as well as what thousands of years have created where Teutonic and Italian varieties meet, where the Alps isolate a few to carry on today.
These few, in Arno Camenisch's spare telling, create their own hierarchy. Beckett might have conjured up such a quartet, and the Irish-born, Scots-raised translator Donal McLaughlin conveys the low-key happenings in suitably stringent, spare, sour prose. Neither Camenisch nor McLaughlin appear to pander to crowd pleasing, and they favor a detached if exacting take on this setting.
This combination of detail and distance creates a hermetic feel within stoic scenes. People, others with proper names, come and go, but these tend to remain rather sketchy, glimpsed rather than known more deeply. This stance reflects the attitude of the four main characters, who must remain at the foot of Sez Ner, the original title of this novella. Translating this into a more generic Alp, McLaughlin may have lost the specificity a Swiss reader would bring to this place, but he keeps its resonance for a wider audience, likely far less familiar with humdrum reality than the romance this setting suggests.
Among the anonymous or symbolic protagonists, the dairyman, who guards his cheese wheels like "ingots" in his home, in a bottom drawer, dominates. The farmhand takes refuge in a book which appeals to Catholic sentiment, welcoming manners towards visitors, and local pride. The swineherd makes an excursion to a Stone Man cairn but his motive and his action there remain mysterious. The cowherd puts him, like a Beckett figure, with a lot of bother, and calls his hapless dog "the dope".
What saves this from tedium or insignificance, over about seventy-five pages, is the manner Camenisch chooses to relate the everyday lives these men lead. Rather than chapters, the book divides into paragraphs. No breaks or editorial framework are given, so the reader plunges into the situation as it is. As McLaughlin renders the Swiss-German and I assume from the italicized fragments untranslated the Surselva dialect of Romansh itself, in all its half-understood orthographic and linguistic novelty for English-speaking readers, the impact is muted, yet sustained, by the tone.
Many paragraphs could bloom into their own tales, but they are cut off or reduced to essentials. A cinematic precision stages what we are allowed to see. For instance, here is a paragraph in full:
"With their high-gloss leaflets in their hands, the day-trippers are standing around the cheese kettle, beside the tourist guide from tourist information, who is holding a red flag with a white cross. The dairyman, with a dripping skimmer in his right hand, welcomes them and explains things. The cameras flash and the guide nods as if he knows all this already and a lot more besides. The flock of guests, bunched close together, marvel at the demonstration, not realizing that outside, beneath the steamed-up windows, their rucksacks are being ransacked by the herders."
It's a hard luck life, and the road which cuts down the firs by its construction, the golf course mooted for a slope, the giant phone which although it does not work well, signals change: these markers point ahead from this novel's vague setting. It could be anytime in the past fifty years, in such remoteness.
What endures, Camenisch suggests rather than emphasizes, are the harsh lessons people in these realms have learned to their gain or loss. "Morality is a frost, says Luis. And frost arrives early here, and stops late. The first frost burns any green shoots/ It clears the hillside. What remains has always been there. You can depend on frost." The ambiguity of that final line sums up this 2009 novella well, the first in a alpine trilogy to be released in McLaughlin's translations by Dalkey Archive Press. - John L. Murphy


Camenisch, a superb performer of his own work, uses the characteristics of oral speech and storytelling to great effect. His prose, always rhythmic, is often poetic. The focus on ‘voice’ and different forms of English in recent British and American fiction means that readers will quickly recognise and relish what this rising literary star is all about.
Last Last Orders is the third part of an award-winning trilogy set in the Swiss Alps. It is the final evening in the Helvetia bar, and the regulars sit around one last time to drink and talk before the bar closes for ever. Characters familiar from book two of the trilogy – villagers past and present, dead and alive – gather at the table as tales from the world they inhabit, both tragic and hilarious, are shared and relished. Everything’s coming to an end but as long as someone is still speaking, the last glass will not empty... A quite brilliant scenario – and Camenisch, a master storyteller, can be relied on to make similarly brilliant use of it.
Sez Ner, the first novel in the trilogy, is set during a single summer. The four main (unnamed) characters are the dairyman, his farmhand, the cowherd and the swineherd. Camenisch focuses on these four who live and work in close proximity – but also introduces a host of memorable minor characters. Equally striking are the wind and the weather and the cows, pigs, cats and dogs that inhabit this tale. Part two, Behind the Station, is written from the perspective of two young brothers growing up in a small village in a valley flanked by high mountains.
Camenisch uses ‘miniatures’ (c.f. flash fiction) to tell his stories: often touching, often hilarious, often harrowing – always immediate. Life is frequently as harsh as the surrounding landscape – it is a life marked by hard graft, at times dangerous work, as well as by solitude, cruelty, alcoholism and sheer bloodymindedness – but the author’s handling of situations and everyday lives is characterised at all times by affection, humour and a great ear for the sounds of the setting.
Already established as one to watch on the international literary stage, Camenisch has read to audiences in many countries. Such is the power of his readings, he is often immediately invited back to the country in question. This young author would be a sound investment for any publisher of literary fiction.


‘Critics outside Switzerland are enthused, because Camenisch addresses issues that are valid both at home and abroad.’– Der Freitag, Berlin