Sampson Starkweather - Distinct but kindred, these books are like four ecologically diverse quadrants of one realm, in a Disneyworld of poetry's possibilities. The poems themselves are invested in the purity of experiences and the varieties of contemporary language—news reports, video games, WWF wrestling, Mike Tyson 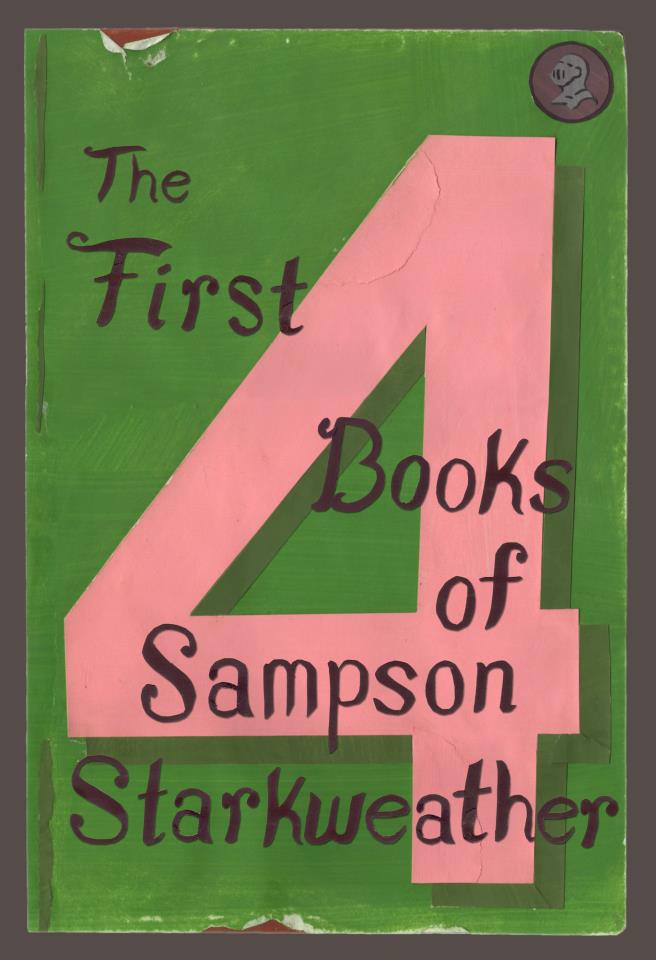 So if a book is an afterlife, why not have four? For these are indeed four separate books with their own forms and voices and preoccupations. KING OF THE FOREST—the title cleverly unites Jack Spicer’s wounded language lion with the title of one of fugitive novelist Benno von Archimboldi’s titles in Roberto Bolaño’s 2666—works in prose with the material of dreams, fantasy geographies and the sudden appearance of magical children, ghosts of childhood. LA LA LA fractures syllogisms, turning them inside out and reworking them into bass-voiced sexy soul-singer slow jams. THE WATERS steps into the footprints of Cesar Vallejo’s Trilce, gently inviting this paradigmatic work of modernist poetry to haunt a latter-day homage that is not a translation but, Starkweather instead suggests, a ‘transcontemporation.’ Residue of Vallejo—words rummaged through and arrayed like broken bits of stone—remain like a mineral deposit swirled into these poems that record the experience of a confrontation, a dialogue between ghosts. Bringing this passionate late-into-the-night conversation fully into the present, SELF HELP POEMS transfigures email dispatches into an exploration of poem-friendship and wounded, punch-drunk Harlequin-robocop masculinity. Disparate but kindred, these books are like four ecologically distinct quadrants of one realm, attractions in a Disneyland of poetry’s possibilities. - Jared White


from KING OF THE FOREST
The boy, mostly seaweed, was born in the forest. Specifically, where the forest meets the sea—
a floor of dead things and trees that won’t budge to any music, that complain about their roots,
that don’t know if they are dead or not, that listen to the boy’s thoughts like a radio, occasionally
swaying to his anger or leaked dreams, but mostly that compose a darkness, a darkness that is
its own color, a darkness that opens up into a bright shoreless sea. The sea where everything,
eventually, ends.

from Self Help Poems
Nintendo always felt more real than life. Simple yet somehow beautiful worlds, constantly breaking down, designed, whether intended or not, as pixilated avatars of hope. Old school video games are perfect precisely because of how unreal they are. They don’t try to teach you anything, except if you see a hammer, you better grab it.

from Self Help Poems
http://www.birdsllc.com/index.php?option=com_content&view=article&id=143&Itemid=56


The Bible
—a transcontemporation of Max Jacob

The binding is rendered from the excess stitches I snipped from my wrist. The cover is made of my melted G.I. Joe collection. Snake Eyes, if you’re out there, I’m sorry, if I knew how to pray, I’d say something about the classic geometry of your crotch and the screw in your shoulder I lost at the zoo. When the book opens, you can hear oars rowing, geese flying by, people pointing their fingers at the sky. The pages are made of paper, naturally, and everyone knows paper comes from trees; each tree was a persona from a Fernando Pessoa poem. The pulp of lost lives. Page 122 ripped out, rolled up in a pinch, a canoe full of burning grass…the smoke said… who falls…all of one mind…black dishwater of love…sunken spoon. Much of the ink is smeared like a slapped mosquito on the collar bone of a beautiful woman. The book is chained to a dresser in a Motel 6 in South Carolina. Its author has gone into hiding.

from Self-Help Poems
Federal Bureau of Investigation
(http://www.youtube.com/watch?v=-Oz8flqIU2U)
Department of Commerce
The Photograph
The Photograph
3 Poems

Adam Robinson: Sampson Starkweather Strips it Down to Just Chapbooks