Frankétienne - These pages are poetic, written in the style of the Total Genre. The Spiralist genre, which embraces at once the novel, poetry, the folktale, theater. In an impressive liaison. The whole thing harmonized in a single architectural ensemble. In order to reconcile art and life 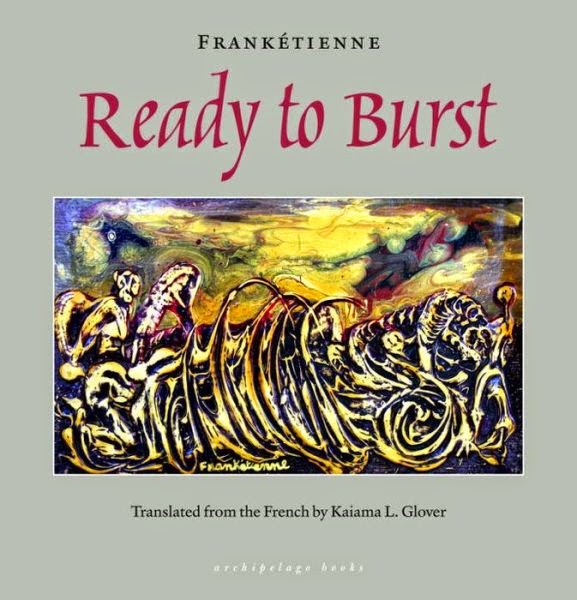 Ready to Burst tells the tale of a young man’s efforts to navigate the challenges of a deeply troubled society. The novel moves fluidly between his experiences and those of his alter ego, opening a window onto the absurd realities of a dictatorship. First published in 1968, Ready to Burst presents a sensitive critique of François Duvalier’s suffocating regime and its consequences for a generation of young people in Haiti. The novel offers at once an exquisite verbal painting of life within a specific context of terror and a vivid exploration of love, hope, and the delicate membrane between reality and dream.
Every day I use the dialect of lunatic hurricanes.I speak the madness of clashing winds.Every evening I use the patois of furious rains.I speak the fury of waters in flood.

His work can speak to the most intellectual person in the society as well as the most humble. It's a very generous kind of genius he has, one I can't imagine Haitian literature ever existing without.
— Edwidge Danticat
The "burst" in "Ready to Burst", also announces the eruption onto the scene of one of literature's great figures [...] a magician of technique and feeling, in the tradition of a great family of writers like James Joyce, João Guimarães Rosa and Osman Lins.— Rafael Lucas in his preface to the 2004 French edition of "Ready to Burst"
Each of Frankétienne's words builds a world of which every Haitian dream— Emmelie Prophete
Frankétienne speaks like an educated man [...] but also like a friend and a citizen of the world at peace with himself and with others.— Annick Chalifour

It is Frankétienne's audacity in his writing - his charming ability to calmly bring his interlocutor into his initially terrifying world [...] which makes him such an incredible writer and persona.— Alessandra Benedicty
A Haitian novel about friendship, politics and artistic theory.
Early in the novel, one of the narrators exclaims: “I’m suffocating. I write whatever crosses my mind. The important thing for me is the exorcism. The liberation of something. Of someone. Of myself perhaps,” and while this might be seen as an excuse for self-indulgence and stylistic effusion, the story is actually one of domesticity and passion. The major character here is Raynand, who has a torrid affair with the exotic Solange, but her passion cools more quickly than his. Raynand is left desolate, especially when he discovers Solange in the arms of a new lover, Gaston. Walking the streets aimlessly and compulsively, he collapses and is found by Paulin, who gently helps tend him and ultimately becomes his intimate friend and confidant. Stimulated by the volatile political climate, Paulin is working on a novel, and he shares this work with Raynand. Paulin’s work is experimental and expansive, and he’s never quite sure where it’s going (or even what its title is), but its existence leads him to have aesthetic and philosophical conversations with Raynand about the nature of creativity and the possibilities of artistic form. In fact, part of the narrative is taken over by Paulin’s novel. Raynand is genuinely moved by his friend’s words, though it doesn’t keep him from becoming increasingly isolated, and he resumes his lonely and obsessive walking. Eventually, Paulin is savagely beaten at a political rally, and Raynand is caught and imprisoned for political activism.
Frankétienne writes with a savage beauty about politics, art, and the roles of men and women in a turbulent world. - Kirkus Reviews

Ready to Burst opens with an explanation and defense of 'Spiralism', the technical-aesthetic approach the author takes in this novel, and a subject to which he returns repeatedly in the course of the narrative. Yes, this is a novel-about-writing-a-novel, to a certain extent, as one of the protagonists, Paulin, is working on one -- and, as he explains:
These pages are poetic, written in the style of the Total Genre. The Spiralist genre, which embraces at once the novel, poetry, the folktale, theater. In an impressive liaison. The whole thing harmonized in a single architectural ensemble. In order to reconcile art and life.
Life is a spiral in motion, and so is the work he -- Paulin as well as Frankétienne -- wants to write:
I'm constructing my novel in a spiral, with diverse situations traversed by the problematic of the human, and held in awkward positions. And the elastic turns of the spiral, embracing beings and things in its elliptical and circular fragments, defining the movements of life. This is what I'm using the neologism Spiralism to describe.
The basic story is fairly straightforward, as Ready to Burst focuses on two lives: there's Raynand, who loses his great love, Solange, ventures to the Bahamas to earn a better living, is deported back to Haiti, struggles to make ends meet, and is eventually imprisoned. And there's would-be writer Paulin, his friend, whose main struggle is in trying to create his work of art -- trying to write even as he understands that: "Literature is dying" (but finding in those death-throes still some use for it). They are different and yet much the same -- indeed, Raynand eventually says of Paulin:
Maybe he's just me ... Me at a distance ... Me in the conditional ...
Maybe, indeed, Raynand is just an invention of author-Paulin, an alter-ego for his Spiralist invention .....
Frankétienne's novel describes the:
Tragedy of a people torn between secular suffering and the uncertainty of a dream without moorings.
The novel moves between realist-depictions of everyday life and struggles -- especially Raynand's --, Paulin's fictional theorizing, and more abstract fragments. Frankétienne weaves all these threads together, too: Paulin tries to write a work following these principles; Raynand eventually reads and reacts to Paulin's efforts (and is the one who realizes the title for Paulin's work -- a title that is, of course: Ready to Burst).
Frankétienne tests Spiralism, but also keeps it under fairly tight control; the narrative spins, rapidly but not too wildly, and it does not lose all sense of story and progression, despite Paulin's claims to the (somewhat) contrary:
Not necessarily accessible from the start. I present my language in the dizzying circle of a fabulous merry-go-round. Magic carousel that sometimes spins against the wind. It's a moving polyhedral mass. Changeable. I loathe the Procrustean bed.
It's telling that so much space is devoted to explaining the writing, rather than simply writing in this manner, as if Frankétienne harbored doubts that Spiralism could hold its own without being propped up by careful explanations of the method, and arguments for its suitability. Still, this at least is effectively done, and it does blend in reasonably well with the stories spun around it here. Occasionally, too, the insights are worth this behind-the-scenes perspective, as when Paulin discusses the degradation of language and the difficulties of then using it in art:
Certain words. Certain expressions. As a result of being brooded over. On everyone's lips. On everybody's tongues. Soaked in drool. They end up being veritably eroded, left with nothing more to say. Having become insipid flakes of sawdust that pass ridiculously from one mouth to the next. Empty speak.
Paulin also argues for the fast-paced work of fiction: ours is no longer an age when people have the time to linger over over-long works, he maintains:
Our age doesn't lend itself to reading literary works, boring in their too often useless length.
Frankétienne, too, seems convinced:
In this world of speed, where events unfold at a dizzying pace, faster is better.
And yet while this novel zips along quickly, and isn't very long, Frankétienne still manages to convey the drawn-out desperation of everyday Haitian life at that time. For all their personal frenzy, the characters rarely and barely manage to advance in any meaningful way, frustrated in many of their ambitions by a corrupt society and a Haitian economy that has little room for them or most of their compatriots; the only economic success story is of a foreigner who manages to fleece the locals in an elaborate con, based solely on appearances. Advancement -- indeed any reasonable form of life -- seems only possible beyond Haiti, the ambition for many of the characters, regardless of what it entails (and from arranged marriages to a plague of crabs, those seeking escape put up with a lot in trying to obtain a better life).
If the case made for Spiralism here is not entirely convincing, Ready to Burst is nevertheless an impressive case-study -- a novel that is 'ready to burst' yet manages still to maintain a solid enough shape for readers to readily grasp it and what its author wishes to convey, in all its messy power. Perhaps Frankétienne could or should have shown greater faith in literature -- far from dead yet, as this novel too proves -- but even with all the doubts riddling it, Ready to Burst is a vital, impressive work. - M.A.Orthofer