Lex Brown - a high stakes action-adventure thriller about sibling loyalty, robot studs, and drones that takes the reader to the edge of sexual possibility, making them reconsider what turns them on.


The year is 2056. Hotshot lawyer Mia Garner needs a fresh start after dumping her cheating boyfriend. So she goes on a cross-country drive with Derek, her handsome tech stepbrother, to meet Xavier Céron, a mysterious CEO who wants to acquire the game-changing nanochip Derek invented. But when Céron’s sadistic plans for the chip are revealed, what—and who—is Mia willing to do to stop him?


“A sci-fi romp with sex acts stacked on top of each other in a sort of dripping post-modern parody.”
—Broadly


Each novella in the New Lovers series is an independent story of about 12,000 – 18,000 words in length. My Wet Hot Drone Summer is a high stakes action-adventure thriller about sibling loyalty, robot studs, and drones that takes the reader to the edge of sexual possibility, making them reconsider what turns them on.


Set in the year 2056, My Wet Hot Drone Summer by Lex Brown follows Mia Garner and her stepbrother on a road trip across the United States. Mia is a hotshot lawyer who recently dumped her cheating boyfriend. She is working on a class action suit against the mayor of Miami for his attacks on civilians. Her stepbrother Derek is a brilliant computer programmer who has developed new technology to be used in conjunction with domestic drone flights. He plans a meet with Xavier Céron, a mysterious CEO, and sign a contract that will make him and his co-designer, Wes, into millionaires. In this near future, drones have become utterly integrated into domestic society—no one notices. But technological advancements collide with an encroaching global ecological catastrophe. Mia represents ordinary people in Miami, forced from their homes by rising sea levels. It is amid this catastrophe and a total surveillance culture that Ms. Brown weaves her tale of unbridled lusts, personal greed, and tangled alliances. Mia struggles to come to terms with her infatuation to her stepbrother. She channels this taboo lust into a raunchy affair with Wes. During their night of lovemaking, Mia feels she is being watched. Not to be outdone, Wes exploits Derek's crush on Mia and seduces him as well. Brown creates a scenario where everyone sleeps with everyone, but come morning, they have to face the consequences. During her journey, Mia meets Xavier at a cocktail mixer in Los Gatos, California. She also meets Evangeline Christmas, an heiress belonging to the Christ-mart retail chain. While the target of the satire should be obvious, it also shows Brown not taking the material too seriously. Some giggles are par for the course in a narrative this raunchy and lurid. Like any good grindhouse movie, Wet Hot Drone Summer doesn't take itself too seriously. Nothing would ruin the mood more than an overly serious and dour lecture on all the problems in the world. Mia acts as the conscience of the novel, but she isn't a humorless scold. Published by Badlands Unlimited, an imprint specializing in both erotica and art books, My Wet Hot Drone Summer aspires toward a literary raunchiness. Not without precedent, Bandlands Unlimited seeks to fill the niche in the erotica market once held by the legendary Olympia Press. Olympia Press, run by Maurice Girodias, printed the infamous Traveller's Companion books. Besides churning out raunchy titles, Olympia was also home to groundbreaking achievements like putting out works by William S. Burroughs, Samuel Beckett, Jean Genet, and other luminaries of the literary canon. If My Wet Hot Drone Summer is any indication of the quality Badlands Unlimited brings to the literary erotica market, then they are off to a great start. Brown's book does not belong in the same category as Fifty Shades of Grey and its countless imitators. This is socially relevant smut with characters possessing a realism and personal vulnerability. The sex is pure spectacle, but the story's spirit veers closer to the controversial film I Spit on Your Grave. - Karl Wolff


In Lex Brown’s book My Wet Hot Drone Summer, #4 in the Badlands Unlimited New Lovers series (Hyperallergic previously reviewed #1–3), the artist/writer looks at a world not unlike our own, where sex, surveillance, and loss of privacy are intertwined in a commodified world of power dynamics ruled by a fictional corporation by the name of Céron Solutions. The premise is somewhat simple: A lawyer named Mia breaks up with her cheating boyfriend William, then decides to road-trip with her hot stepbrother Derek from the East Coast to Cerón’s headquarters somewhere in Silicon Valley, where Derek is planning to sell a nanochip that will completely change the way corporate America collects data and information about all people. On the way, they pick up Wes, a mysteriously super-hot dude with a gigantic dick. What ensues is a strangely tantalizing journey that explores sexuality and power dynamics.
This is queer erotica. Sexual attraction happens between basically any willing parties, regardless of gender. Sadly, no threesomes are present — unless you count getting off to watching surveillance footage of two people doing it as a way to distract someone. Part of what makes the sex feel supercharged is the use of the Xeron, a vaginal stimulator dildotron that enhances orgasms by 1 million percent. (Brown told me that this was actually based off of the Zeron, a technology created at MIT.) Manufactured by Cerón Solutions, which is owned by the ultimate M-A-N, Cerón, the Xeron is another method of masculine corporate control over the female body, particularly its pleasure principle. Cerón controls the Xeron when a woman is using it, both making her the object of his gaze and controlling her pleasure. And it’s not just pleasure he’s interested in being in charge of: “Cerón has a massive file of surveillance footage that he is threatening to use as blackmail against me and hundreds of other Americans,” Mia says, at a moment when it’s becoming evident that she must find a way to outsmart him. 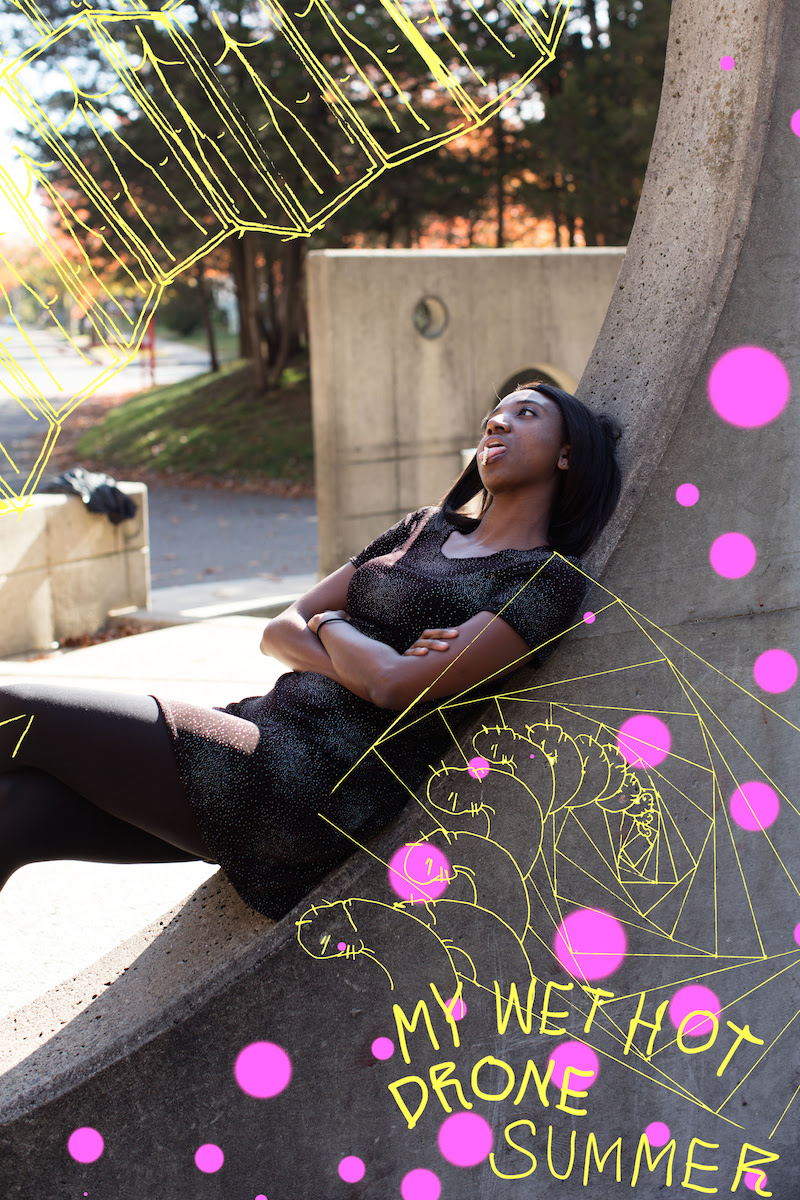 ‘My Wet Hot Drone Summer’ cover interpretation by Walker Olesen (click to enlarge)
Often, this sort of overly obvious discussion about corporate control can feel redundant or just depressing, like when we read about it online, as in the NSA halting Section 215 of the Patriot Act, which previously allowed for random information collecting via phone records. But in Brown’s book, the discussion about anti-surveillance activists defeating corporate control is strangely sexy.
There are also, of course, parallels throughout with the cultishly popular ’80s film Wet Hot American Summer, about a group of teens at summer camp in 1981. In the film, summer is over but there’s a lot more that needs to be resolved, and in the meantime camp director Beth is falling for an astrophysics professor who is trying to save the camp from a piece of NASA equipment that’s falling from space. Similarly, in My Wet Hot Drone Summer, Mia is trying to save the world from the powers of the nanochip that Derek, who is not-so-secretly in love with her, created as a way to earn some real, much-deserved money. Derek’s struggle also points to an issue that members of the creative working class always grapple with: how to make a living in a society that doesn’t value cultural capital or the arts unless they are made profitable or marketable in a mainstream way.
The book is hard to put down, in large part due to the realistic sex scenes, which are especially hot if you’re into a variety of gendered sexual expressions. The great range of sexually heightened situations leads one to further engage with a story that’s very relevant to the times we live in. Brown writes in a believable way about the corporate workplace and the large number of seemingly superfluous people who seem to not really do anything, while also making a lot of money. 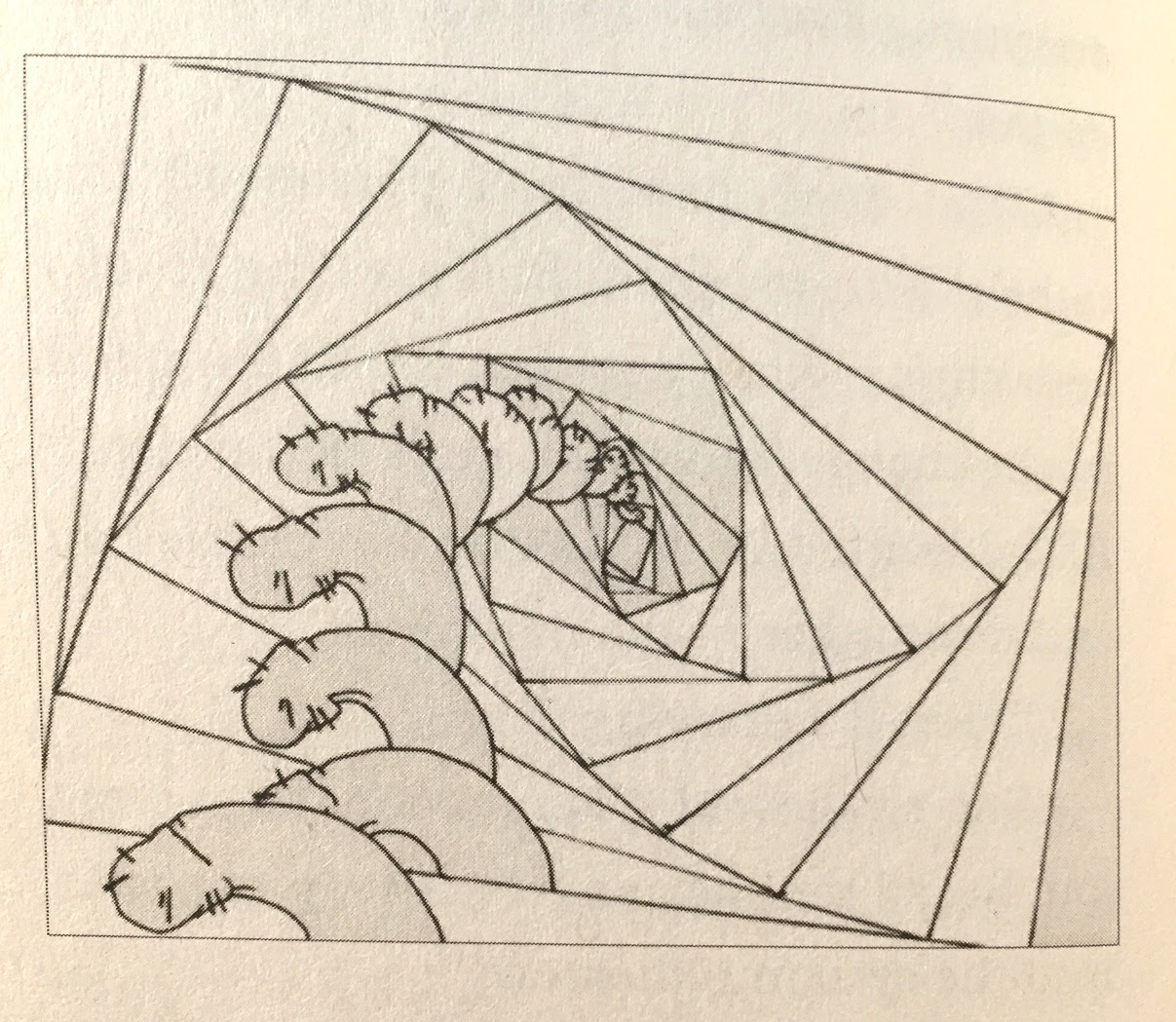