Pedro Lemebel - From Chile’s most provocative novelist, a novel of forbidden love and revolution during Pinochet’s dictatorship 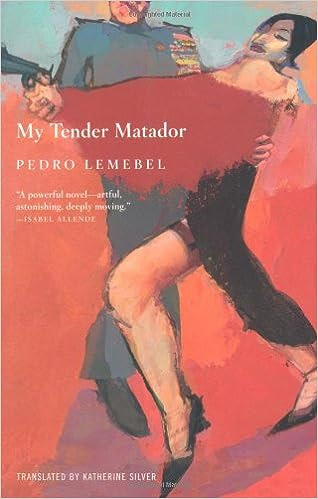 Centered around an historical event that changed Chile forever—the 1986 attempt on the life of Augusto Pinochet—My Tender Matador is the most explosive, controversial, and popular novel to have been published in that country in decades. It is spring 1986 in the city of Santiago and Augusto Pinochet is losing his grip on power. In one of the city’s many poor neighborhoods, the Queen of the Corner, a hopeless and lonely romantic, embroiders linens for the wealthy and listens to boleros to drown out the gunshots and rioting in the streets. Along comes Carlos, a young, handsome man who befriends the aging homosexual and uses his house to store mysterious boxes and hold clandestine meetings. Thus begins a friendship and a love that will have unexpected though vastly different consequences for both.
My Tender Matador is an extraordinary novel of revolution and forbidden love, and a stirring portrait of Chile at a historical crossroads. By turns funny and profoundly moving, Pedro Lemebel’s lyrical prose offers an intimate window into the world and mind of Pinochet himself. As Carlos and the Queen negotiate their unspoken complicity and mismatched affections to the beat of the bolero and the threat of repression, Pinochet contends with revolutionary upstarts, negative world opinion, fascistic reveries, terrifying nightmares, and an endlessly chattering wife who has more respect and affection for her hair stylist than for her husband.
As riveting as it is exquisitely crafted, My Tender Matador marks the fictional debut of one of Chile’s most admired, popular, and challenging literary voices.


Chile and its capital, Santiago, were in turmoil in 1986. The Pinochet regime was under fire from within, and the country was rife with activists, strikes, and riots. Lemebel crafts a wonderful snapshot of this period of Chile's history--pairing fictional characters against real ones. The Queen of the Corner is a cross-dressing, effeminate gay man who embroiders for a living and harbors an unrequited love for Carlos, a handsome young revolutionary from the university. At first, Carlos only wishes to store mysterious boxes at the Queen's house. Then late-night "study meetings" with his compatriots from the university become more and more frequent. Deftly woven into the stories of the fictional characters are the activities of the paranoid Pinochet himself and his fashion-obsessed wife. The Queen eventually comes to realize that his house is serving as a front for the revolutionaries, and a touching tale of love and danger emerges. Lemebel's tender story of a time of great unrest provides an extremely engaging read and a portrait of love and loss under a cruel dictator. - Michael Spinella


An odd-couple romance, in the tradition of Kiss of the Spider Woman or The Crying Game, between a Marxist revolutionary and drag queen.
The American debut of Chilean activist and writer Lemebel begins in 1986, after 13 years of military dictatorship in Chile. Underground groups of revolutionary terrorists have been wreaking havoc across the country with alarming regularity, causing blackouts in the cities and assassinations in the provinces, and the authorities respond with predictable brutality. During times as troubled as these, even someone as politically ignorant as the Queen of the Corner, a transvestite living in the back streets of Santiago’s teeming slums, can become a player—although not by her own choice. The Queen has the misfortune to meet and fall for Carlos, a handsome young revolutionary, and is innocent enough to offer him the use of her home. Soon Carlos is dropping off large parcels for safekeeping and bringing friends over for late-night meetings on short notice. The smitten Queen doesn’t mind that these packages contain weird devices that look like torpedoes, or that Carlos’s study groups never seem to discuss books or classes. Her story unfolds alongside that of Gonzalo, another gay Chilean, who serves as hairdresser to Pinochet’s wife. Gonzalo is about as politically informed as the Queen—he thinks, for example, that the General would be much better liked by revolutionaries if he changed the color of his uniforms—but he is able to see the regime’s growing desperation from the inside. A collision will come somewhere down the road, obviously, but who will be the victim, Carlos or the General? Or will more innocent parties, like Gonzalo or the Queen, pay the price?
A sharp account, suspenseful and nicely paced, that benefits from the unusual perspectives of innocent bystanders in this dirty game. - Kirkus Reviews

I’d love to see someone translate the Chilean writer Pedro Lemebel’s latest book, Adios Mariquita Linda. Katie Silver translated his best-known novel, Tengo miedo torero, and she and I have talked about how mysterious it is that the book received so little attention in the U.S. Lemebel seems like just the sort of prose writer to do well in the U.S., and not just because he was one of the few novelists that writes frankly of being gay and of the rampant, often fatal homophobia in Latin America. Bolaño was a big fan of Lemebel and said Lemebel was an outcast but also the real victor of Chilean literature. - Idra Novey