Sarah Blackman - a novel about violence—the violence of the fist, of the womb, of the story. It is also a novel about language and how we use it to build a world when the one we find around us is irretrievably broken 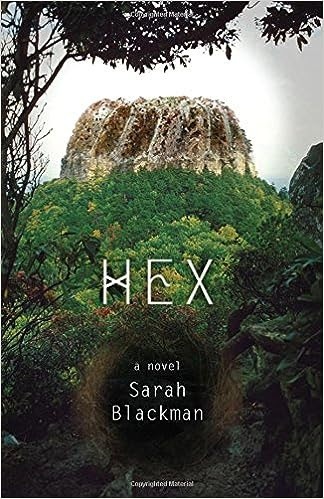 Alice is a motherless child, born to a motherless child, and raised with neither care nor grace. Her response to this multiple abandonment is a lifelong obsession with her best friend Ingrid, or Thingy, as Alice calls her, and a sort of fantastic narcissism wherein she figures herself as the nexus of a supernatural world she understands through a blend of mountain lore, indigenous Cherokee legend, and the dangerous idiom of the fairy-tale girl who enters the forest despite being warned.
The novel is written in blended parts and is crafted as an address to Thingy’s daughter, Ingrid the Second, who is now in Alice’s care. Alice attempts to tell Ingrid the story of her life: her friendship with Thingy; her troubled relationships with her father, a small-town sexual troubadour; her stepmother, a hard-minded business woman who treats all interactions as commerce; her marriage to her husband Jacob, a silent figure of tremendous will; and her growing suspicion that Ingrid is another girl-child around whom disaster accumulates. Simultaneously, Alice tells the child the kind of bedtime stories she herself has used to make sense of her world. For Alice, and thus in Hex, the line between fantasy and reality is nonexistent, the mountain is older than its geology, and the world a limbo in which everything that has ever happened is coming around again.
Hex is a novel about violence—the violence of the fist, of the womb, of the story. It is also a novel about language and how we use it to build a world when the one we find around us is irretrievably broken. Sarah Blackman, Mother Box and Other Tales, FC2, 2013.
read it at Google Books
excerpt (in Conjunctions)


The eleven stories and one novella of Mother Box, and Other Tales bring together everyday reality and something that is dramatically not in compelling narratives of new possibilities.
In language that is both barb and bauble, bitter and unbearably sweet, Sarah Blackman spins the threads of stories where everything is probable and nothing is constant. The stories in Mother Box, and Other Tales occur in an in-between world of outlandish possibility that has become irrefutable reality: a woman gives birth to seven babies and realizes at one of their weddings that they were foxes all along; a girl with irritating social quirks has been raised literally by cardboard boxes; a young woman throws a dinner party only to have her elaborate dessert upstaged by one of the guests who, as it turns out, is the moon. Love between mothers and children is a puzzling thrum that sounds at the very edge of hearing; a muted pulse that, nevertheless, beats and beats and beats.
In these tales, the prosaic details of everyday life—a half-eaten sandwich, an unopened pack of letters on a table—take on fevered significance as the characters blunder into revelations that occlude even as they unfold.


“These lucid stories hearken to the spiritual and cerebral fiction of Katherine Mansfield and Joy Williams.  They breathtakingly face what comes next in the world—whether terrible snout or beautiful child—hallucinating what is entirely real.”—Kate Bernheimer


“Sarah Blackman is a wizard at rendering the odd intricacies of the domestic sphere. Her insights are stunning, her eye is keen, and her sentences are unbudgeably right. An excellent debut.”—Noy Holland
“It is a triumph when a sentiment as banal as “One must travel around and pick things up and put them down again” nevertheless sounds profound; or when a sentiment as bizarre as “She would be a body and next, who knew?, a house” seems undeniable and even inevitable. This can only be a result of Blackman’s carefully measured prose. And when it comes to storytelling and the enrapture of her audience, Blackman again excels. Consider, for instance, the eerie “Many Things, Including This,” or “Conversation,” or “The Dinner Party,” all tales that kept this reader turning pages, eager to dispel the dread that hangs over them and to find out what happens next.” —Kenyon Review Online


Sarah Blackman’s debut story collection Mother Box, and Other Tales is the winner of the FC2’s Roland Sukenick Innovative Fiction Prize. When a book comes tagged with the label of “innovative fiction,” it can generally go in two directions: its prose will be inventive or its narratives will be wild. Blackman chooses to write clear, clean prose that makes the fabulist elements of the plot feel all the more strange. She catalogues ordinary details and then drops the moon, literally, into a dinner party. The overall effect of this style leaves the reader bewildered and grasping for more of the everyday details that once felt out of place but now are the only thing connecting the text to our world.
It’s a double edged sword. Occasionally, the stories meander and turn back on themselves in a way that is delightful. A synthesis emerges between the reader and the characters in the stories. Each is trying to make sense of the world and doing everything he or she can to hold onto their sanity. At other times, the stories fall flat and the ambiguity overtakes any sense of meaning as in the title story when the communal point of view discovers the genealogy of the main character involves cardboard boxes. All in all, this is a collection that continually challenges the reader to meet Blackman halfway. At its best, the reader is given enough guidance and is able to scale the mountain. When this happens, the view is breathtaking. In the more uneven stories, the reader ends up in the same situation as the protagonist in “Many Things, Including This”: lost in the fog and struggling for answers.
The stories in this collection vary in length from the almost-novella “The Silent Woman” to flash-fiction style pieces such as “The Cherry Tree.” Most of the stories are around ten pages long, and it is at this length where the balance between satisfied curiosity and pleasant ambiguity reaches an equilibrium.
The two stars of this collection are “A White Hat on His Head, Two Wooden Legs” and “A Beautiful Girl, A Well Loved One.” Both of these stories lay a solid foundation of fairy tale before the characters are forced to move into a contemporary world. The juxtaposition between the fantastic and the common results in a tale that is richer than either could be on its own. A girl grows up in a cottage in the woods with her mother and grandmother before she eventually grows up and takes on a high-powered business position. Where Blackman is at her best is when she is able to use language to retain the familiar plot elements of fairy tale in a present-day setting. After the girl moves out of the cottage in the woods, she is unable to shake her fairy tale upbringing. In one of the many lovingly-detailed lists throughout the books, the narrator asks what a girl needs. Snuck in between mundane items such as bras and cigarettes are “razors for shaving the fur that grows in her creases” (136). Even when the world of the Brothers Grimm is abandoned, its effects reverberate through the characters until the end of their stories.
Blackman has an eye for detail and is able to turn the mundane into the significant. Her stories are ambitious, and with everything that takes risks, it occasionally doesn’t pay off. However, when it does, it reminds the reader why he or she turned to fiction in the first place. There is power in these stories, and when they are well-told, they lodge in the reader’s brain and fill their dreams with boxes, soldiers, balls of string, and babies. It’s the kind of thing that make stories worth reading.
- Jacob Euteneuer


Sarah Blackman: New Myths for the Republic of Family Life Review, Alaska Quarterly Review, American Poetry Review, Conjunctions, Oxford American Magazine and The Missouri Review among others. She has been anthologized in the Poets Against the War Anthology, Best New American Voices, 2006, Metawritings; Toward a Theory of Nonfiction, and xoOrpheus: Fifty New Myths which was nominated for a World Fantasy Award in 2014. Blackman is the co-fiction editor of DIAGRAM, the online journal of experimental prose, poetry and schematics and the second longest running online magazine in the country, and the founding editor of Crashtest, an online magazine for high school age writers which she edits alongside her students at the Fine Arts Center. Her story collection Mother Box was the winner of the 2011 Ronald Sukenick/American Book Review Innovative Fiction Prize and was published by FC2 in 2013. Her novel, Hex, is forthcoming from FC2.