Jason DeBoer's experimental fictions were created by disintegrating and then reintegrating Shakespeare's language into new narratives of warfare and desire. The result is an ultra-vivid hypertext, a warped yet faithful concordance of astounding poetic power 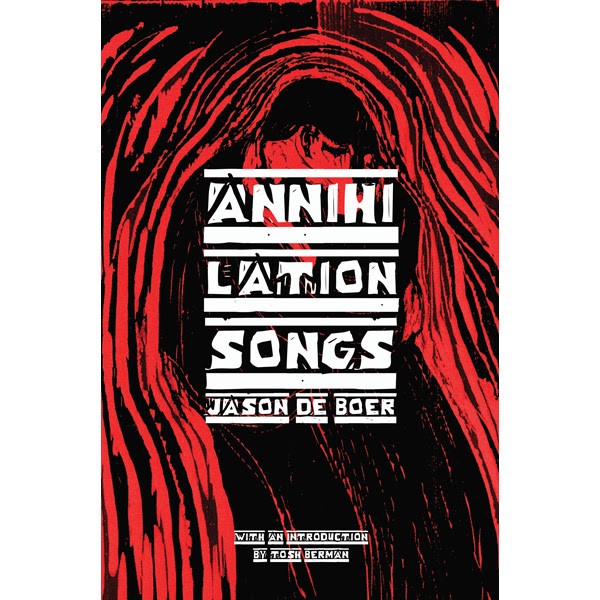 
Killing the Dogs of Kathmandu, by Jason DeBoer
The Execution Of The Sun


With Annihilation Songs: Three Shakespeare Reintegrations, writer and award-winning filmmaker Jason DeBoer presents radical anagrammatic takes on The Tempest, The Two Gentlemen of Verona, and Hamlet. Using only the words contained within each original drama, DeBoer's experimental fictions were created by disintegrating and then reintegrating Shakespeare's language into new narratives of warfare and desire. The result is an ultra-vivid hypertext, a warped yet faithful concordance of astounding poetic power, with theoretical roots in the earth of Bataille, Nietzsche, and Sade.


These gripping tales are preceded by an introduction by Tosh Berman, and Killing the Dogs of Kathmandu, DeBoer's psychedelic account of the origin of his technique in Nepal, and the history of the reintegrations.


Much has been made of Shakespeare’s contribution to the English language in the decades since his plays were first performed, but Jason DeBoer’s Annihilation Songs: Three Shakespeare Reintegrations takes a different approach. Rather than simply praising The Bard, DeBoer has broken down Shakespeare’s work to its raw elements, its words, and recombined them to form new stories using only the words within each play. Though every word within the reintegrations has its origins in one of Shakespeare’s plays, not every word from each play appears in the new stories.
DeBoer taught in SFUAD’s Creative Writing and Literature department back in 2015; now, it is through CWL chairman James Reich’s independent publishing house, Stalking Horse Press, that Annihilation Songs has been published, a whimsical coincidence that arose out of Reich’s interest in DeBoer’s work rather than any personal connection. The first reintegration, “Here Swims a Most Majestic Vision,” was born in 1996 while DeBoer suffered through mefloquine-induced insomnia in Kathmandu, Nepal. This story was a very physical two-year long process, in which DeBoer chopped up his despised copy of The Tempest using a khukuri knife. For his later stories, DeBoer graduated to using an online lexicon to choose his words.
The sentence structure within these three reintegrations bears mentioning. Phrases like “the immortal moon, still skyish as a pale morning apparition”; “Nero, that imperial changeling, ruled with cool assurance of a distant star”; and “she loved to molest a dollar, just as he lived to stroke leather black as pitch” feel like a resurrection of language. DeBoer feels that the link to Shakespeare gave him a “Get Out of Minimalism Free” Card, allowing him to “write in a much more florid style than would normally be recommended in this day and age.” While DeBoer gave careful consideration to individual word arrangement, he says he “wanted to let Shakespeare conform to [his] voice and interests, not vice versa.” Even the degree to which the individual word placement was rearranged varies from piece to piece. In “Here Swims a Most Majestic Vision,” DeBoer left more phrases intact, as seen in the story’s title, but he ultimately felt that readers became too focused on the Easter Egg hunt of Shakespearean phrases. For subsequent reintegrations such as “The Execution of the Sun” and “Puzzles of War,” based on Two Gentlemen in Verona and Hamlet, the composition was more seamless, words themselves recombined to create new words; Shakespeare would be proud.
DeBoer is currently writing his fourth reintegration, “A Fallow Heart,” based on The Merry Wives of Windsor, which differs thematically from the first three. The stories within Annihilation Songs feature characters who react against these unconquerable forces like death, religion, the sun, love, and patriarchy; they “probe the impossible.” Miranda battles her abusive husband, Caliban seeks to transcend death, Cornelius comes up against the war-machine that surrounds him, and Valentine attempts to kill the sun, which allows Christianity to maintain what DeBoer refers to as arbitrary dominance.” Within “A Fallow Heart,” the two brothers at the story’s center protect themselves from the real world as opposed to fighting it, staying at home all day and pretending they are English knights.
In the years since the first reintegration came to life, DeBoer’s stories have been published in eight different countries and many online journals. “I probably overdid it on reprinting the stories,” DeBoer admits, “but they were so time-consuming to write that I wanted to give them the most exposure possible.” The first reintegration took two years to compose, and now with children, he has found the fourth integration to be even more difficult. These days, he leans more toward writing novels and screenplays, making Annihilation Songs a throwback to his shorter form work.


In addition to composing these reintegrations, DeBoer founded Trembling Sun Films and his work has been featured in magazines such as The Iowa Review, Quarterly West, and Exquisite Corpse. His 2015 film Dead River won the New Mexico Film Award at the 2016 Albuquerque Film Festival and is set to play at 1 pm, Dec. 10, at SFUAD’s Screen as part of the Santa Fe Film Festival. DeBoer celebrated Annihilation Songs’ publication on Dec. 7 at Santa Fe Spirits Bar, standing beneath a ceiling dripping with red glittering snowflakes and gold baubles. A crowded room of people gathered on chairs and bar stools to listen as he read “Puzzles of War.” In response to an audience question about what Shakespeare means to him, DeBoer admitted he best enjoyed Shakespeare through the interpretive lens of cinema. He commented on the themes, voices, and tones of the original Shakespearean plays, and how readers would bring their own knowledge to Annihilation Songs. “Shakespeare is so well-known that his work is metatextual for readers,” he says of the layers of meaning. “Perhaps he can no longer be experienced any other way; his work is so pervasive.” - Marisa Doherty


A PRODIGY SWOONS
Eschatology and Orgasm

Jason DeBoer is the founder of Trembling Sun Films. His feature film Dead River has garnered critical acclaim and awards in Europe and the United States. His writing has been featured in The Iowa Review, Quarterly West, The Barcelona Review, Stand, Exquisite Corpse, The Absinthe Review, and other publications.