Translated By - Each of the authors invent or interpret place. Mundane, marginal, infamous, impossible. Together, the texts create a strange and beautiful territory that traverses distance and time 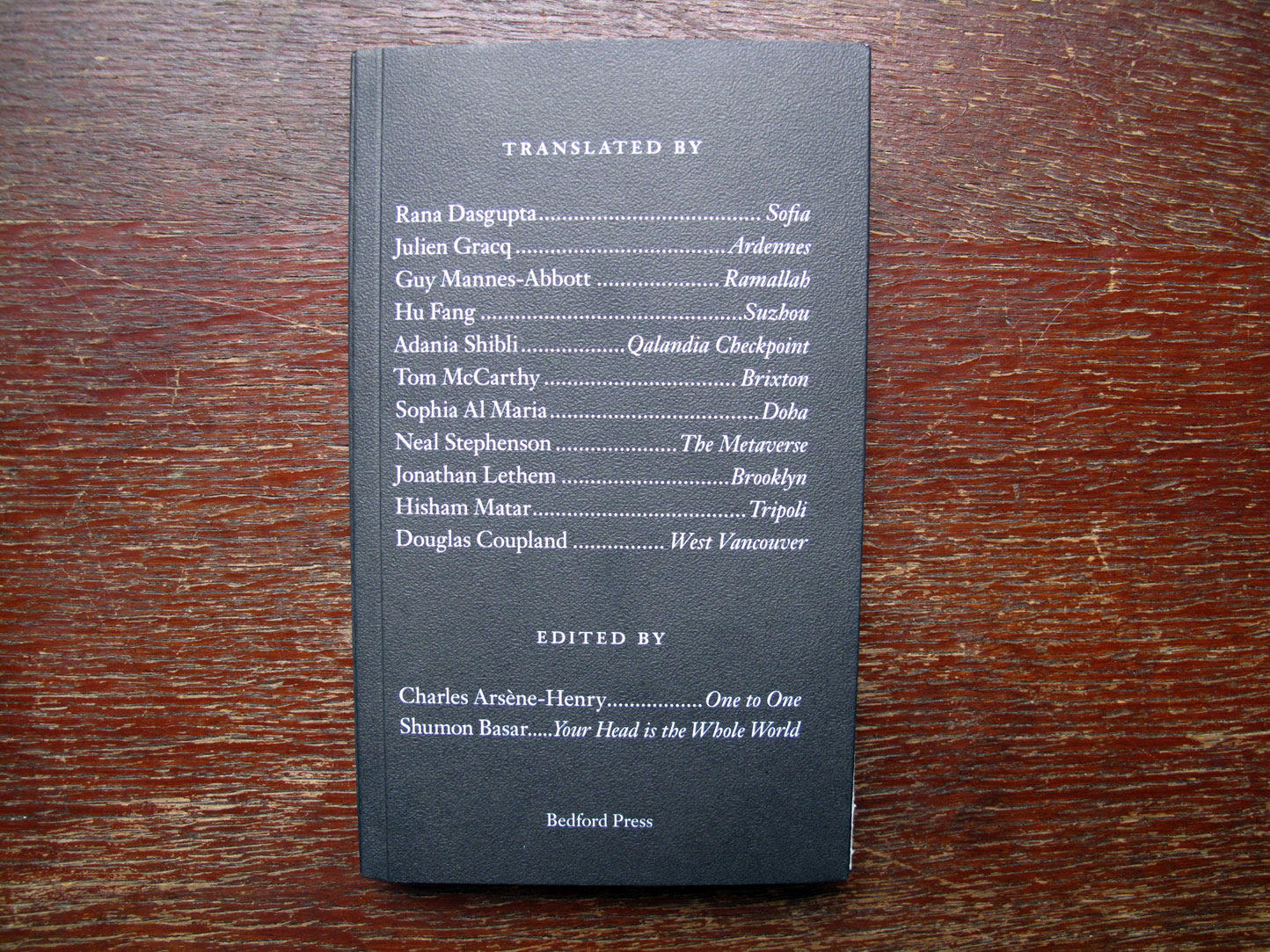 
Translated By accompanies the exhibition at the Architectural Association, which gathers eleven literary writers and eleven literary-places and subjects these to an act of immaterial translation: via the voice. The stories run through Ramallah, recollect turn of the century Sofia, remember the space-ship looking-Sheraton Hotel in Doha, wander through the 'Metaverse' and end at the end of the world in West Vancouver. Each of the authors invent or interpret place. Mundane, marginal, infamous, impossible. Together, the texts create a strange and beautiful territory that traverses distance and time. Includes essays by Charles Arsene-Henry and Shumon Basar.Pages are stick together deliberately so that the readers can make the book unique to themselves."

The walls of latest exhibition at London's Architectural Association gallery are painted a muted grey. There are 11 large-ish white numbers placed carefully around the room and small postcards next to the numbers. There seem to be various kinds of chairs or seats everywhere. But, as someone hands over the props of the standard exhibition audio tour, a heavy-duty pair of headphones and what looks like an audio guide, it becomes clear that the exhibition doesn't take place in this room. It is not a visual experience at all.

The show is a kind of audio mix-tape of fictional and real places written by eleven international authors, including Douglas Coupland, Rana Dasgupta, Hu Fang, Julien Gracq, Tom McCarthy, Guy Mannes Abbott, Sophia Al Maria, Hisham Matar and Neal Stephenson. These vivid short stories or extracts are spoken by actors and last around ten minutes, variously traversing landscapes from Ramallah to turn-of-the-century Sofia, a cold, dead Vancouver to a dusty checkpoint in Palestine. Each of the authors sent a small picture postcard – a trigger image – which holds the listeners' attention.

The exhibition doesn't happen in the room or on the seats – it takes place between the spongy cushion of the headphone and the visitor's ear. Next to the bar at London's Architectural Association, the show's curators Shumon Basar and Charles Arsène Henry discuss the concepts and processes that went into making a show, without a show.

In the AA gallery, eleven writers led visitors to as many places on a literary journey through space and time – from the Doha desert to early 1970s’ Brooklyn.
Beatrice Galilee: Tell me about the evolution of this show – why did you decide to make an exhibition of contemporary fictions, and why did you choose audio as the medium?
Shumon Basar: There's two parts to the answer: one is the content and one is the form. The content is about the relationship between writing and reading, and then writing and place, and place and voice. The form is an audio guide – I think they have become one of the most pernicious aspects of contemporary museum experiences. At the same time they embody everything about both the collectivisation and the erasure of individual interpretation with respect to art. We were interested in how we might use a device that everyone is familiar with in a way that illuminates and opens up what you see rather than close it down.
Charles Arsène Henry: Yes, it came from two different sets of desires that met in the object of the audio guide. The other side comes from the actual act of reading and what it implies. What fiction can do that only fiction does. Fiction can set up infinite communication between two consciousnesses from the inside.

Can you explain the strategy and process? How did you decide the authors? Did you give them a brief?
SB: Once we had decided it would be audio-based it became a mix-tape of 10 or 11 tracks, which gave us straightforward, quantative parameters. We then started to discuss which writers that we knew that had written about places – either real places or invented places. The title of the show, "Translated By," is what successful writers achieve – they're translated into other languages. But someone like Walter Benjamin would say the act of reading is almost like the act of translation. In a very Tom McCarthy way, all text is like a code, which has to be coded and decoded. We're interested in how writers translate something which is about place. All but one text already existed, so in that sense we both worked as editors. The show bears some similarities to the notion of an anthology, but an anthology where we're trying to construct a strange map that consists of these texts. For us it wasn't incredibly important that the texts were commissioned. By virtue of excising them and putting them next to other texts, they become new texts. We were interested in producing an exhibition that wasn't exhaustive and that didn't emerge from the domain of images. I mean, what are images? They're neural impressions in your mind. So the image that you conjure up in your head when you're dreaming or someone is talking is as real an image as the one you see.

There are a lot of assumptions people can't get rid of when they enter a gallery – they imagine that everything they see they can't touch, everything is an exhibit to be observed. In my experience it takes a lot to ask visitors to cross that threshold, to break that barrier. How have people responded since the opening? Are they open to following new rules?
SB: That's why our lovely invigilators downstairs are actually a key part of the process. They have to immediately let people know there is no exhibition without the audio. If you go back to the status of a museum audio-guide, the convention is that it's a supplement to the art. You can choose whether or not to have it. The difference here is that we're inverting it. It's not secondary, it's primary.
CAH: There is something else that we could not have planned, which is that the show only happens when it is activated. There is no show without visitors. I entered the space three days ago and there were 10 teenagers and it was silent. You just see them wearing the headphones. The mental image: that's when the show happens.

After the exhibition closes, the audio is switched off and the texts will be bound in a book. As part of the process you're also planning to have some conversations about fiction and reading with some 18–19 year olds – what are you hoping to get out of that?
SB: We wanted to do something that explored how modes of reading have shifted, are shifting and will shift, partly through technological developments. We realise that there's a lot of discourse on this subject, but generally it's all written by people above a certain generational threshold for whom print was their primary mode of engagement with text. And whilst that's fine, it's very different talking theoretically about how things are changing to experiencing it as a generation for whom the distinction between print and digital, page and screen, are not moral ethical or ontological divisions but part of a continuous plateau. There are invisible battle lines drawn – as if there's antipathy and antagonism between print and digital but they just don't exist for the subsequent generations. We then decided that we should speak to young people for whom the internet wasn't something they had to adjust to, it was simply there. Now that an 18-month-old child can play with the iPad, it seems really important to hear from young people about their relationship to writing and reading. We're keeping an open mind about it. It's possible we will proven wrong.
CAH: Yes, for example, the way that 18-19 year olds obsessively collect vinyl. It's reaction and counter reaction. There are different reactions depending on the generation. I have been writing on a typewriter for six or seven months. Perhaps we have a consciousness of what a typewriter is – it's an old thing. But, for the younger generation it's alien. And you have much more desire for something alien than for something old.

An accompanying paperback, published by Bedford Press and designed by Z.A.K., will include all the stories as well as essays by the curators. It will be launched during an event that speculates about the future(s) of writing, reading, listening and fiction.
- www.domusweb.it/en/architecture/2011/02/10/translated-by.html